Prokofiev
Romeo and Juliet, Op.64 – ballet based on the play by William Shakespeare 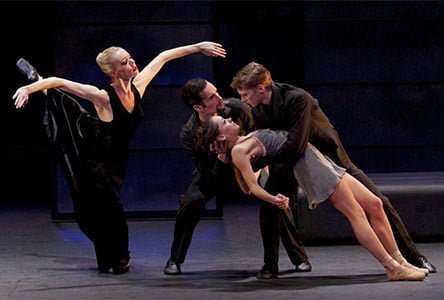 The good news is that Scottish Ballet return to London – it is an interesting company with characterful dancers. The less good news is that they have brought a revival Krzysztof Pastor’s 2008 Romeo and Juliet. I detect an element of R-and-J fatigue in London audiences to whom companies far and wide seem intent on bringing their version of Shakespeare’s tragedy. Each proclaims love, intensity, timelessness et al, but, this is a very difficult work to bring off – do you go for detailed narrative or the evocation of storyline? Is it rich in period detail or set in another period? Crucially, not all choreographers are gifted in the movements of love, their style profoundly un-lyrical. Pastor is not entirely one of those, but he was formed in the Dutch school of choreography with all its lunges, twitches and flicks which sit rather uneasily with this tale of doomed love. He also possesses a curiously four-square musicality that lends a predictable rhythmical attack, especially to the crowd scenes, which at times are more callisthenics class than the streets of Verona.

Ah yes, Verona! Matters are not helped by a muddled visual narrative: it is time-warp from 1930s Italy for the first Act, to the 1950s for the second, and even the 1990s for the epilogue, but not all characters change costume, so Tybalt continues to wear fascisti black shirt and boots after the war has ended and Mussolini has long gone. Perhaps this time-shifting is to emphasise the universality of the tale, but Pastor, his dramaturg Willem Bruls, and his designer Tatyana van Walsum could just as easily put Act One in the Rome of Tiberius and the second in the Venice of the Doges, and to the same effect. And it is most definitely not Verona, with its back projection of a street leading to the EUR ‘cube’ in Rome…! 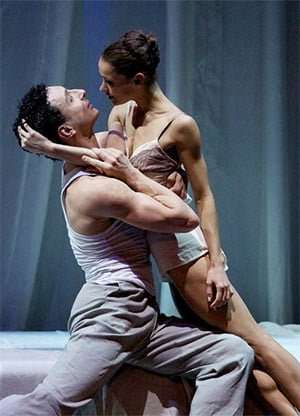 Pastor opts for an evocation of storyline, and sketches in elements of narrative to be able to present the two lovers, but why the Capulets are all made bad and Romeo seems not to have a family at all is anybody’s guess. This runs counter to the ‘two houses’ setting of the Shakespeare and negates the glimmer of hope that Romeo and Juliet’s love could give to the warring of two rival clans. No, Capulet, here danced with unremitting grimness by Owen Thorne, is a wholly nasty piece of work and Christopher Harrison’s Tybalt a playground bully with slicked-back hair. Romeo’s lot are even less well defined, except that they wear more colourful costumes – perhaps this is a mods and rockers thing.

The most interesting character is Mercutio, who is so much the focus of attention in the opening scenes that many would be forgiven for thinking that he was Romeo. Victor Zarallo is an engaging dancer with bags of personality, who drew attention to himself when still in the Royal Ballet Upper School, and who impressed during the Edinburgh Festival last year. Here he is a cheeky, happy-go-lucky Mercutio, moving with a quicksilver quality and easily stealing every scene in which he appears, and that is part of the problem, for Romeo is, for the first scenes at least, a cipher, mooching around in the background, but of no more importance than Benvolio. There is no sense of him being a leader of any sort, and Pastor makes him a bit of a milksop throughout, a sweet boy and generally little else. When Erik Cavallari is given something more, he grabs it with enthusiasm, so he dispatches Tybalt after Mercutio’s murder with wide-eyed fury and is extravagantly emotional over Juliet’s ‘dead’ body. He is an honest dancer and artist and works tirelessly not least to present Sophie Martin’s outstanding Juliet. She and he created these roles in 2008, and Martin has developed a nuanced and captivating portrayal, albeit in Pastor’s somewhat strange setting. She dances with rare coherence, fully invested in both the character of the young girl and the movement palette which she manages to make almost always interesting. I would like to see her in a more choreographically rich version of this ballet, as sometimes she is short-changed with rather prosaic contemporary-meets-ballet movement.

Pastor here reveals his limitations: there is one sequence of moves for Juliet which is repeated three times: twice during a strange duet with her father and once during the balcony pas de deux. Not only is the context different, but the music too, and yet the choreographer repeats the sequence, confirming the impression that, in addition to omitting to know his Shakespeare that well, Pastor has not really listened to Prokofiev’s score, here heavily cut and smudgily and noisily played by the Scottish Ballet Orchestra under the enthusiastic Enrique Carreon-Robledo. With so many versions of this ballet extant, it is difficult to make a mark, but certainly this version for Scottish Ballet does not secure a place in the premier league.