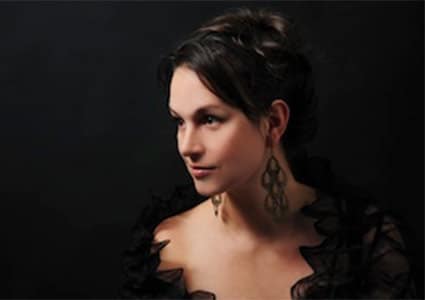 This attractive programme bore the subtitle “Love and War in Bohemia”, the music of three Czech composers complemented by dramatic Baroque interventions. Sophie Harmsen immediately took centre-stage for three substantial Handel arias. ‘Where shall I fly?’ was particularly restless, the motion of the strings and urgency of the singer suggesting flight but also the despair of its subject Dejanira. This ‘mad scene’ was not completely unhinged, but Harmsen was appropriately ill-at-ease in her singing. The strings’ sound was bare, with no vibrato throughout, though in ‘Scherza infida’ Alison Lawrance used it for a lovely and affecting cello solo. This aria was infused with deep melancholy throughout by Harmsen, as Ariodante himself prepared to commit suicide. Finally ‘Crude furie’, a rather tragic part of Serse, was vigorously performed, with Harmsen skilfully negotiating the tricky runs.

Harmsen returned prior to the interval for the eight Love Songs, published by Dvořák as his Opus 83 in 1888. The songs also make up two-thirds of the twelve Cypresses, a group of independent songs assembled by the composer, who also arranged them for string quartet. This in theory may have aided the task of David Matthews, whose arrangement for string orchestra in 2008 was the version we heard. Matthews succeeded in adding some very attractive and idiomatic points of detail to enjoy alongside Harmsen’s singing. The songs are short but winsome, their tunes often memorable, enjoying in Matthews’s version warmth and gentleness.

Jonathan Morton also led the Scottish Ensemble in some lively instrumental pieces, beginning with the incredibly stoical Study for Strings, written in 1943 by Pavel Haas while he was held captive in Terezin, a Nazi concentration camp between Prague and Dresden. The Study is one of three Haas pieces written in the camp that have survived. The Ensemble brought powerful energy to the writing, with a freedom helped by the standing positions for violinists and violists. The piece got off to a forthright start and remained positive, resolute and unbowed.

Biber’s Battalia began the second half. This is an astonishing work, its condensed but extremely vivid pictures of a battle placed in the context of seven short movements depicting the approach to the fight and its aftermath. The clash itself lasts barely 23 seconds – at least that is what Morton told the audience, while also explaining that the eight different key-signatures employed for the drunken soldiers’ singing in the second movement were intentional and not the playing gone awry! There was a casualty, though, in the form of a broken bow sustained by violinist Cheryl Crockett – a measure, perhaps, of the commitment given to what was a terrifically enjoyable performance, with the ricochets of artillery, drums and inebriated musketeers all conveyed by stringed instruments, the only addition a piece of card helpfully inserted between the fingerboard and strings of Diane Clark’s double bass to better portray gunshots. Prepared instruments, then – 300 years before John Cage!

Josef Suk’s Serenade, written 219 years after the Biber, felt considerably older – but once the ear had adjusted, this very attractive work could be enjoyed on its own terms. At the time of composition Suk was a precocious composer in his late teens, but his teacher and future father-in-law Dvořák was concerned his music was becoming too serious. His instructions for the summer of 1892 were to write something more light-hearted, which Suk did. Indeed this Serenade – intentionally or not – directly quotes the scherzo of Dvořák’s own Serenade for Strings in its second movement, a lilting waltz. There are also sunny, outdoor melodies that prevail in the faster movements, the Scottish Ensemble projecting these with enjoyment. The emotional heart could be found in the slow movement, where Lawrance’s cello made a particularly poignant contribution. The finale raced away, its high spirits briefly tempered by a thoughtful hymn-tune that added extra emotion.