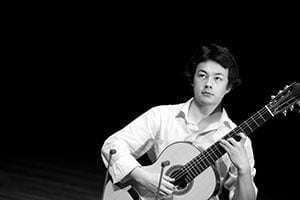 Sean Shibe is the first guitarist to be selected for the BBC Radio 3 New Generation Artists scheme, and for this BBC Lunchtime Concert at Wigmore Hall he gave a programme such as Julian Bream might have performed in the 1960s.

Bream it was who played a large part in the appropriation of works by John Dowland for guitar, the lute’s natural descendant, in order to help mark the 500th-anniversary of his birth, which fell in 1963. Here Shibe exhibited a rare talent for playing at an exceptionally quiet dynamic, using a very slow vibrato to characterise the theme of the Forlone Hope Fancye, which became an extended sigh. The Fantasie was more intricately worked out but affectionately played, finding a carefree resolution.

Shibe proceeded to perform one of J. S. Bach’s few original pieces for lute, transposed down a semitone to make it more suitable for the guitar. Again the soft volume enabled Shibe to create a touching stillness at the start of the fugue, which grew outwards from a tiny kernel, while the flanking movements flowed with admirable clarity, Shibe bringing out also the dance elements.

Benjamin Britten was the dedicatee of the sizeable Kammermusik, a vast setting of Hölderlin written by Hans Werner Henze in 1958 for tenor (Peter Pears), guitar (Bream) and instrumental octet. From this are taken the Drei Tentos, three brief interludes. Their language is a winsome example of neo-classicism, with the composer’s exploration of the upper register of the guitar creating a moving tapestry for the first interlude, ‘Du schönes Bächlein’. The second, ‘Es findet das Aug’ oft’’, is more animated and harsh, but the sweeter tones returned for ‘Sohn Laios’, which ended lost in thought as Shibe absently plucked at the final harmonics.

Henze and Britten were good friends around this time, the latter also discovering through Bream that the guitar was a suitable vehicle for the more economical writing of his later style. The Nocturnal is an important transitional work to this new-found austerity, and along with many of Britten’s works of the time it explores a fixation with sleep and night-time. As he had done with the earlier Lachrymae (for viola and piano, later orchestrated), Britten took the opportunity to pay homage to Dowland in his anniversary year, with a set of variations on a theme (‘Come, Heavy Sleep’). The theme itself is not revealed until the end, though even then not in full – as if unable to finish a book without the eyelids dropping, the music ends halfway through a phrase.

In Shibe’s performance, every detail clearly registered, every nervous thought and restless turn of our non-sleeper magnified to disconcerting proportions. The nightmarish aspects could perhaps have been even more strikingly delivered, but the quiet moments of uncertainty were exquisite and fragile. The theme itself, when it arrived, was a little faster, but this enabled Shibe to slow more markedly as sleep took hold – at which point the Wigmore Hall audience played its part by remaining silent. An impressive recital had a doleful encore in the shape of a Mompou Cancion, beautifully phrased.