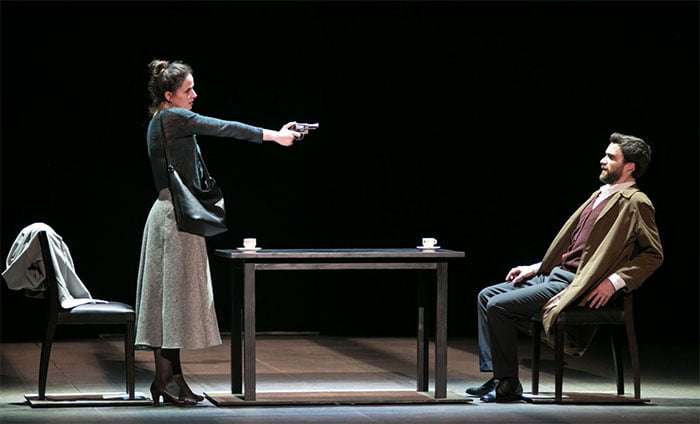 The Hackney Empire shares an architect with the Coliseum but is a relatively intimate venue, here further reduced in size by the removal of the stalls seats to allow for the participation of seventy-plus musicians from Pécs in southwest Hungary. An extravagant gesture for a none-too-widely publicised one-night-only presentation offering British audiences a unique chance to experience an audacious Franco-Hungarian double bill! The show, attributed to Opéra Grand Avignon and the Opéra-Théâtre de Metz Métropole and presented in association with the Budapest-based Armel Opera Festival, played with English surtitles. The first half was sung in what seemed to be at times a rather loose approximation of the original Italian, the second largely in the anticipated Hungarian, though bizarrely Béla Balázs’s spoken Prologue was delivered in French by actor and director Philippe Murgier.

When Senza sangue (Without Blood) received its UK premiere (a concert performance by the BBC Symphony Orchestra under Simone Young), it garnered mixed notices possibly because the work is so plainly conceived as an upbeat to Bluebeard’s Castle. Musically speaking, the pieces start much the same way and the starry Hamburg production of both, directed and designed by Dmitri Tcherniakov, made much of the narrative overlap, both halves taking place chiefly in the hotel bedroom of the protagonists. The present production, crediting different directors, may have been more recognisable to aficionados of Peter Eötvös’s source material or of Bartók’s established classic. 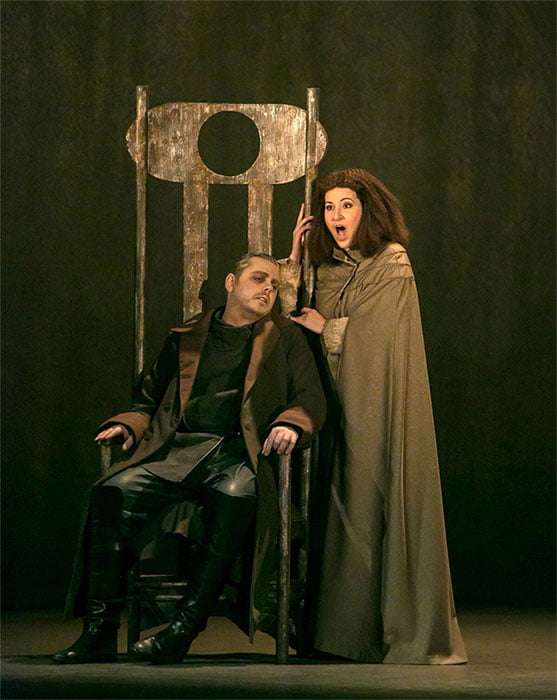 In Eötvös’s piece a woman has tracked down the man who, in an unnamed conflict years before, had killed her father but spared her life. As they relive the circumstances, discuss the repercussions and reflect on the incomprehensibility of life, we are brought somewhere close to Bluebeard’s psychological cul-de-sac, except that the outcome appears to be positive in that Nina does not shoot Pedro and Pedro does not commit suicide. Instead, having recovered their sense of identity, they spend the night together.

As at the Barbican the mezzo was Albane Carrère, as elegant as Juliette Binoche but a rather pale presence vocally and dramatically. She looked about forty years too young for the story to make any kind of literal sense – so too did her interlocutor – but perhaps that was beside the point. The props were minimal, including a table and chairs, two cups and saucers and, most significantly, a gun; stage movement was stylized and spare notwithstanding the apparently tangible realism of the story. With nothing much happening over forty-five minutes, the interest lay in the quasi-tonal, sometimes glittery, sometimes murky orchestral soundscape. The scoring, employing Bartók’s forces but excluding (in so far as one could tell) the electronic organ, is technically outstanding as was the orchestral realisation under the composer’s conducting, the music’s distinctively Hungarian tang compensating for any puzzlement. Spread out in the stalls the band was unsurprisingly loud, yet the singers managed to project with reasonable clarity. 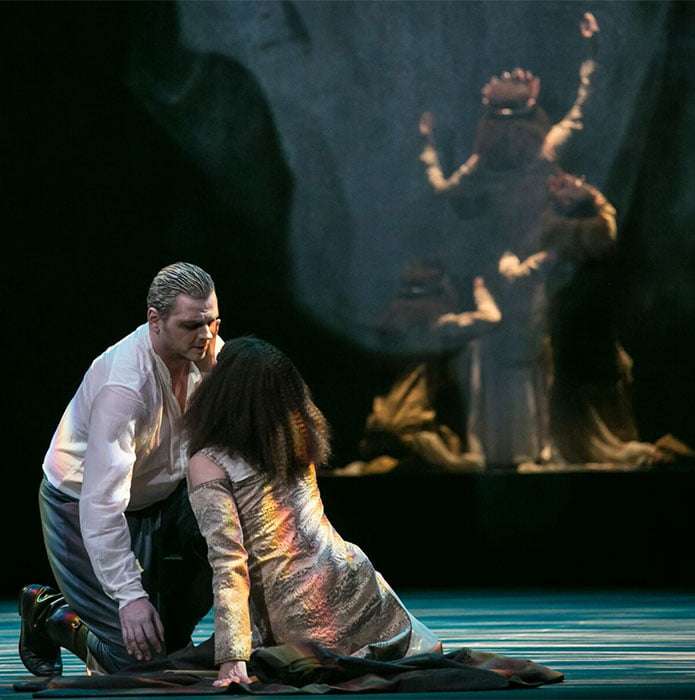 For Bluebeard’s Castle we were in a similarly grey habitat, this time inhabited by a more regal chair and a back curtain concealing a curved walkway. There were no doors even though the opera famously itemises seven of them and Senza Sangue hinges on Nina having been hidden behind a trapdoor. Instead, the requisite atmospheres were evoked by video work, albeit not always comprehensibly. Where the production scored was in the extremely detailed and sensitive acting of the protagonists – quite a contrast with the deliberate neutrality on offer before the interval – and in the neatly conveyed suggestion that Bluebeard himself is the castle’s real psychological prisoner. The newlyweds were played by a different couple, as idiomatic and authoritative as you could wish for and the orchestra again covered itself with glory. Only one touch seemed impractical. When Adrienn Miksch launched her top-C with the flood of light at the fifth door, she was facing away from the conductor. That made perfect co-ordination impossible.

What held the evening together was not so much its overarching interrogation of obsessive relationships as the superb musicianship of all involved under the inspired conducting of Peter Eötvös.