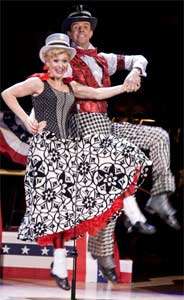 This benefit performance for Carnegie Hall provided a rare opportunity to enjoy one of the earliest and greatest landmarks of American musical theatre. “Show Boat” was innovative in its seamless integration of plot-driven music and lyrics with dramatic and theatrical elements, taking the genre of musical comedy beyond mere collections of songs and dances. Even more significant was its treatment of issues of social importance – Ravenal’s compulsive gambling and his desertion of Magnolia, the ostracism of Julie owing to her mixed-race heritage and marriage to a white man, Julie’s alcoholism, and most significant of all, the portrayal of the contrast between the lives of blacks and whites living side by side along the Mississippi River. “Show Boat” was also the first musical in which black and white actors sang together – a pointed advance beyond the ban on such integrated performances that had prevailed in the era in which the show’s story was set. Indeed, we have come to take interracial casting so much for granted that it was initially shocking to see the choristers segregated by race in separate sets of risers, but this was justified both dramatically and musically. 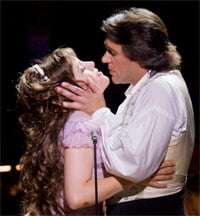 This concert version – which cut enough of the show to bring the presentation to a close in just over two hours, including the interval – presented nearly all of the elements of a full production. There were no sets, of course, but images projected onto the rear wall – stylish line drawings in the first act and colourful poster-like illustrations in the second – pleasingly evoked the setting of each scene. Alan Adelman’s lighting effects captured the changing moods of the story. The production was engagingly directed by Francesca Zambello, who produced a fully staged production of “Show Boat” at the Royal Albert Hall in London two summers ago. The 53-piece Orchestra of St Luke’s and a 44-voice vocal ensemble performed excellently under Paul Gemignani, doing full justice to Jerome Kern’s brilliant and moving music, and an ensemble of eight dancers brought Robert Longbottom’s clever choreography to life. The only aspect that was less than satisfactory was the electronic amplification, which did help to make the dialogue intelligible, but negated to a degree the marvellous Carnegie Hall acoustics. 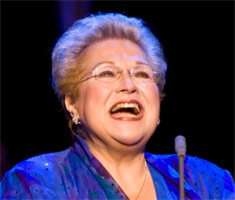 The cast included a number of singers from the world of opera – Nathan Gunn and Celena Shafer excelled as Gaylord Ravenal and Magnolia Hawks, the show’s romantic leads, and Alvy Powell and Alteouise deVaughn were terrific as Joe and Queenie, the black couple who work on the Cotton Blossom show boat. Among the many veterans from the musical comedy scene were four who are currently performing on Broadway – Carolee Carmello, Jonathan Hadary, Gavin Lee and Megan Sikora. Gregg Edelman has excelled on Broadway, in concert performances, and in film and television roles; there were the actors Becky Ann Baker and John Bedford Lloyd; and nine-year-old Carly Rose Sonenclar. There was also a (non-singing) cameo appearance by Marilyn Horne, who was greeted with a warm ovation. 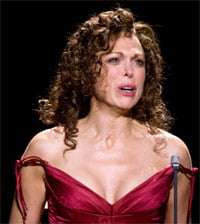 The show got off to a brilliant start with the catchy overture and double chorus and the opening parade scene in which Hadary’s engaging Cap’n Andy introduced the Cotton Blossom troupe, and Baker, as his domineering wife, established their family relationships. A succession of Kern and Hammerstein’s most memorable songs followed. Gunn entered with ‘Where’s the Mate for Me?’ and joined with Shafer in the ravishing ‘Make Believe’. Powell’s deeply resonant ‘Ol’ Man River’, supported by the chorus, was quite moving, and Carmello, deVaughn and Shafer combined in a lively, shuffling rendition of ‘Can’t Help Lovin’ Dat Man.

The upbeat mood was interrupted in deVaughn’s operatic and dark ‘Mis’ry’s Comin’ Aroun’’ (perhaps explaining why the number was cut from the original production), which led into the dramatic scene in which Julie is accused of miscegenation and she and her husband Steve are forced to leave the troupe. (Edelman and Carmello, who played the ostracised couple, are married in real life.) Levity soon returned, however, in the delightful ‘Life Upon the Wicked Stage’, featuring Sikora’s comedic vocalisations and Lee’s dancing took full advantage of his tall, gangly frame. There were two more love songs for Gunn and Shafer, the tender ‘You Are Love’, before the wedding scene that ended the first act and the bouncier ‘Why Do I Love You?’ early in the second.

The most enthusiastic audience response was to Carmello’s powerful rendition of ‘Bill’ that literally stopped the show. Kern had originally composed that song to a lyric by P. G. Wodehouse for a show from which it had been cut, and Hammerstein re-worked the lyric for “Show Boat”. The remaining second-act musical numbers all reprise music heard earlier, but sometimes with a significant change of mood, as when ‘Make Believe’ was sung by Ravenal and young Kim in the convent and ‘Can’t Help Lovin’ Dat Man’ returned as Magnolia’s audition-number at the Trocadero. (There was also one song that Kern did not compose – the well-known ‘After the Ball’ by Charles K. Harris – which Magnolia sings at her Trocadero debut on New Year’s Eve.) And, of course, ‘Ol’ Man River’ kept returning without rhyme or reason, until it finally brought the show to its happy, if implausible, conclusion.