Skip to content
LnRiLWNvbnRhaW5lcltkYXRhLXRvb2xzZXQtYmxvY2tzLWNvbnRhaW5lcj0iNmIzNDMzNmNmZTc3NWZiNGJlMTVjMmIwMzU3NWM1MjYiXSB7IHBhZGRpbmc6IDI1cHg7Ym94LXNoYWRvdzogNXB4IDVweCAxMHB4IDAgcmdiYSggMCwgMCwgMCwgMC41ICk7Ym9yZGVyOiAycHggZG90dGVkIHJnYmEoIDEwOSwgMTA4LCAxMDgsIDEgKTsgfSAudGItZmllbGRbZGF0YS10b29sc2V0LWJsb2Nrcy1maWVsZD0iODM3Y2ExZjc0MGRjZDdkOTdlMzQzOWMyYjIwMWZmZTMiXSB7IGJhY2tncm91bmQtY29sb3I6IHJnYmEoIDIzOCwgMjM4LCAyMzgsIDEgKTtwYWRkaW5nLXRvcDogMTBweDtwYWRkaW5nLWJvdHRvbTogMTBweDtwYWRkaW5nLWxlZnQ6IDEwcHg7IH0g
LnRiLWNvbnRhaW5lcltkYXRhLXRvb2xzZXQtYmxvY2tzLWNvbnRhaW5lcj0iNmIzNDMzNmNmZTc3NWZiNGJlMTVjMmIwMzU3NWM1MjYiXSB7IHBhZGRpbmc6IDI1cHg7Ym94LXNoYWRvdzogNXB4IDVweCAxMHB4IDAgcmdiYSggMCwgMCwgMCwgMC41ICk7Ym9yZGVyOiAycHggZG90dGVkIHJnYmEoIDEwOSwgMTA4LCAxMDgsIDEgKTsgfSAudGItZmllbGRbZGF0YS10b29sc2V0LWJsb2Nrcy1maWVsZD0iODM3Y2ExZjc0MGRjZDdkOTdlMzQzOWMyYjIwMWZmZTMiXSB7IGJhY2tncm91bmQtY29sb3I6IHJnYmEoIDIzOCwgMjM4LCAyMzgsIDEgKTtwYWRkaW5nLXRvcDogMTBweDtwYWRkaW5nLWJvdHRvbTogMTBweDtwYWRkaW5nLWxlZnQ6IDEwcHg7IH0g
Shrek the Musical
Based on the DreamWorks Animation motion picture and the book by William Steig, book and lyrics by David Lindsay-Abaire, music by Jeanine Tesori, additional music and lyrics by Neil Diamond, Mike Himelstein and Eric Darnell
LnRiLWNvbnRhaW5lcltkYXRhLXRvb2xzZXQtYmxvY2tzLWNvbnRhaW5lcj0iNmIzNDMzNmNmZTc3NWZiNGJlMTVjMmIwMzU3NWM1MjYiXSB7IHBhZGRpbmc6IDI1cHg7Ym94LXNoYWRvdzogNXB4IDVweCAxMHB4IDAgcmdiYSggMCwgMCwgMCwgMC41ICk7Ym9yZGVyOiAycHggZG90dGVkIHJnYmEoIDEwOSwgMTA4LCAxMDgsIDEgKTsgfSAudGItZmllbGRbZGF0YS10b29sc2V0LWJsb2Nrcy1maWVsZD0iODM3Y2ExZjc0MGRjZDdkOTdlMzQzOWMyYjIwMWZmZTMiXSB7IGJhY2tncm91bmQtY29sb3I6IHJnYmEoIDIzOCwgMjM4LCAyMzgsIDEgKTtwYWRkaW5nLXRvcDogMTBweDtwYWRkaW5nLWJvdHRvbTogMTBweDtwYWRkaW5nLWxlZnQ6IDEwcHg7IH0g 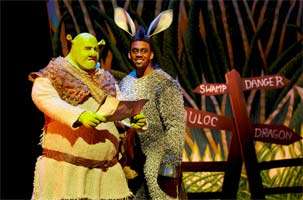 If you have read Shrek in book form or seen the films you will know exactly what to expect from Shrek the Musical. If you know neither you may wonder what has happened to the Drury Lane musical. Ah!, the Theatre Royal, Drury Lane, which was granted a royal charter by King Charles II, an honoured place visited by Samuel Pepys and where great actors of the stature of Peg Woffington, Mrs Jordan, Sarah Siddons, Charles Kemble and David Garrick once performed and where Sheridan’s play The School for Scandal received its premiere. Edmund Kean trod these boards, as did the great Joseph Grimaldi and Dan Leno. And didn’t I once see John Gielgud as Prospero within these walls?

Among the great musical shows that have graced the Drury Lane stage were Oklahoma!, Carousel, South Pacific and The King and I (all by Rodgers & Hammerstein), followed by My Fair Lady, Camelot and Hello, Dolly!, which all had long runs there starring such as Julie Andrews, Laurence Harvey and Mary Martin. Ginger Rogers was Mame, Michael Crawford was Billy and Denis Quilley Sweeney Todd. Further successes included A Chorus Line, The Pirates of Penzance, 42nd Street – and Miss Saigon, the theatre’s longest-running show in what has always been considered the premier musical theatre of the capital. And now what has it got? Pantomime! 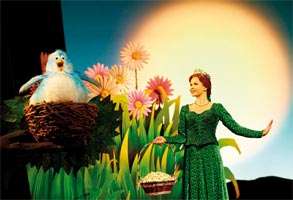 It is a little early for the panto season but that is what seems to have landed on the stage at Drury Lane. Shrek is probably better enjoyed as a book to be read by or to children. The first animated feature that grew out of William Steig’s book was an Oscar-winner, so somebody must love this awful smelly ogre who lives in a swamp and doesn’t seem to have many pals except for a friendly donkey. He showers in mud and has the most appalling manners. All of this will appeal to children in much the same way as Raymond Briggs’s Fungus the Bogeymen or Roald Dahl’s The Witches. They are all subversive tales. 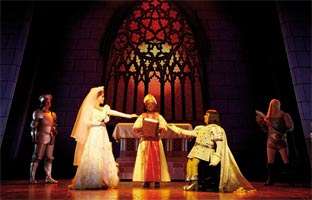 The style of humour is explicit from the beginning. Huge volumes of fairy-tales fill the stage and as one cover opens to reveal “Once upon a time…” we may think we are in for a typical story from Charles Perrault, Hans Christian Andersen or the Brothers Grimm … but we are not. Whereas in most fairy-tales kindly parents might send their infant off to school, in Shrek it’s a case of they can’t wait to get rid of him. “His mother was ugly and his father was ugly, but Shrek was uglier than the two of them put together.” So, at age seven, Shrek is sent out into the world as he hits the road to seek his (mis)fortune. 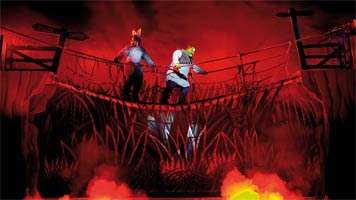 On meeting a witch Shrek is told that a princess will figure in his life, and an ugly one at that, which pleases the cosmetically challenged monster immensely. Life is a journey for Shrek in an effort to reclaim a deed for his rightful land. En route he meets a friendly donkey, fights a flying dragon to rescue his princess and has dealings with Lord Farquaad who has plans of his own. The Lord is vertically challenged which gives rise to all sorts of politically-incorrect jokes. In the supporting cast are any number of favourite characters, Pinocchio, Ugly Duckling, Little Red Riding Hood, Humpty Dumpty, Mad Hatter, White Rabbit, Three Blind Mice, Three Little Pigs, Pied Piper, Sugar Plum Fairy, and Peter Pan too.

The big colourful sets resemble designs for a Christmas pantomime and some are fairly overwhelming, while the flying Dragon will have kids wetting themselves. However, the book doesn’t really stand up to the grandeur of the designs and there are longueurs. The music is fairly innocuous and adds little. The best parts involve the comic business of Lord Farquaad as he scoots about on his little, yellow stocking-clad legs. This is actor Nigel Harman on his knees in a really starry performance that is sometimes quite hysterical. Nigel Lindsay is excellent as Shrek and he manages to make him almost too endearing. Amanda Holden as Princess Fiona, away from being judge and jury on Britain’s Got Talent, is a good song-and-dance performer but she should have better things to do than a burping and farting contest with Shrek. Richard Blackwood is solid as Donkey and the cast is really very good, putting hearts and souls into a show that is less than top-notch.