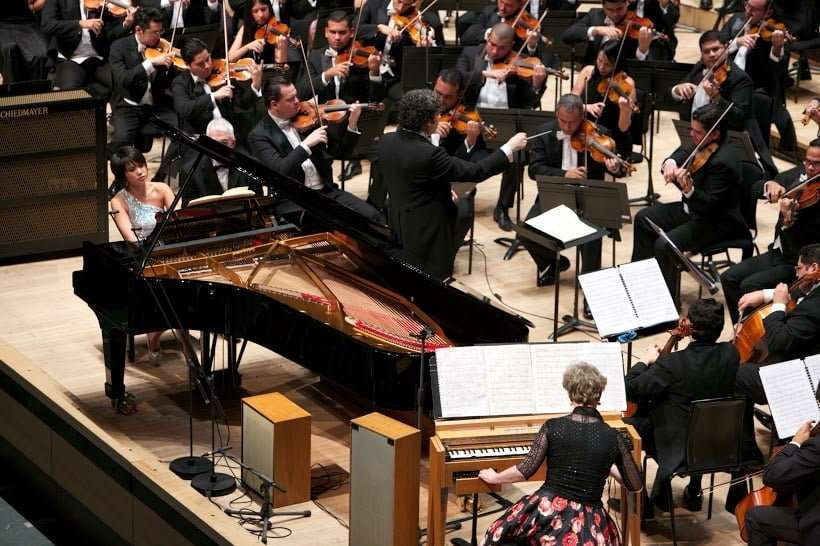 Olivier Messiaen imbued his early masterpiece Turangalîla (started 70 years ago this year) with “all my strengths of love, of hope and of musical research” (from a letter to the work’s first conductor Leonard Bernstein). Turangalîla is a heady concoction of time, love, life and death and Gustavo Dudamel directed a performance of vivid colours and rhythmic contrast to an almost-packed Royal Festival Hall. It no doubt benefited from being the last of four accounts that the Simón Bolívar Orchestra has given on its latest European tour – having started in Barcelona on January 7, then in Toulouse and Luxembourg. It all felt effortlessly secure – and brought an expectant feeling that we could sit back and enjoy the ride.

As well as Dudamel and his players, our guides were Yuja Wang and Cynthia Millar. Somehow Wang’s mini-short, shimmering silver dress complete with matching glittering platform shoes (with stilettos) and Millar’s full-length dark, rose-strewn skirt seemed to epitomise their contrasting instruments: the brittle, crystalline piano, used more as tuned percussion (in tandem with a celesta, here positioned directly behind Wang, and the distinctive timbre of the vibraphone, between the first and second violins) and the flowing ululation of the ondes. The balance between the soloists and the orchestra was exemplary. 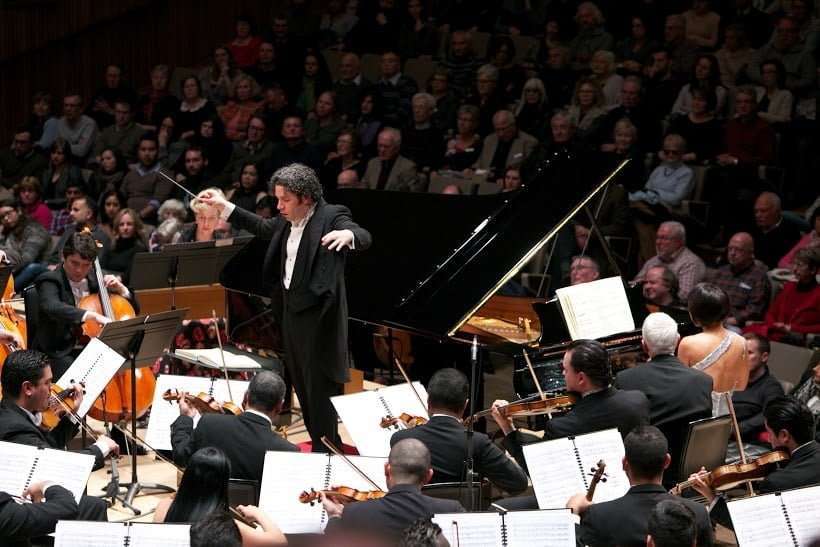 I took the opportunity of following the score – mine being the first edition, although I’m sure Dudamel used the revision authorised by Messiaen. Certainly that later score stipulates a “long silence” after the penultimate movement, which always breaks the tension (there is no such stricture in the earlier score). I’d far rather the musical line power straight into the feverish Finale, but one can’t fault Dudamel sticking to the letter of the revision.

The monumental aspect of Messiaen’s ten movements make it almost impossible to comprehend in one go. What I got particularly from this reading were the contrasts Messiaen encompasses: that the sublime sixth movement (‘Garden of the sleep of love’ – which the revised score suggests could follow an interval!), is so sparsely scored – flute, clarinet, metal percussion, vibraphone, celesta, piano, ondes Martenot and strings sans double basses. Here the winds, percussion and piano offer whispered commentary on the strings’ and the ondes’s slow repeated statements of the ‘love’ theme.

Amidst exhilarating fervour, it is that idea that comes back so triumphantly in the Finale, leading to the final chord which, while enveloped within it, one doesn’t want to end. Here the acclamation was ecstatic and prolonged, with a Venezuelan flag being waved from the choir area. Quite properly, there was no encore – none was needed.

Three video cameras and some microphones were in evidence; the presentation from Luxembourg was live-streamed, so there might have been additional filming for a DVD, or documentary. In the meantime, Dudamel returns to Messiaen on March 23 as part of the LA Philharmonic’s three-concert residency in the Barbican Centre – this time with Des canyons aux étoiles.