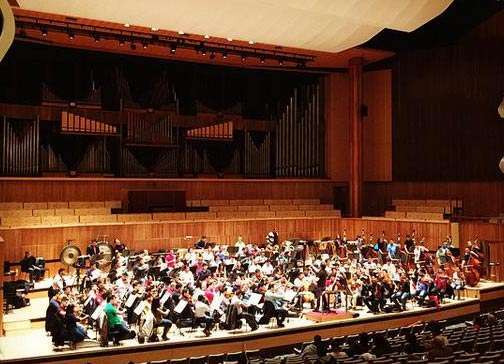 The cult Venezuelan orchestra and its charismatic music director ditched the ‘youth’ component of its title a while ago, but the members of the huge ensemble that crammed onto the Royal Festival Hall stage looked rather younger than when I last saw them – the next generation is coming up fast. The other difference from those heady times when the orchestra had the world at its feet is that Gustavo Dudamel’s conducting style has turned away from glamorous flamboyance to something more economic and cool.

This paid great dividends in Beethoven’s Fifth. Although the full team was only out in force in the Wagner, but even at about half strength, built over six double basses, they were still a formidable presence and a far cry from ‘period’ practice. The string sound’s well-fed leanness, spread and clarity were enhanced by the placement – all the violins on the left, cellos in the middle, violas outside right.Dudamel’s direction of the Fifth clung to many aspects of his recording from 2007, notably in the slowings-down in the first movement, notably so just before the coda and with discreet breaking to introduce a new element. It’s an old-fashioned style, redolent of a now out-dated Brahmsian portliness rather than Beethovenian athleticism, but otherwise the first movement’s tension was significantly charged in the repeat leading to the development, and the lead oboe’s brief solo, eloquently played by Frank Giraldo, suddenly had that familiar knot of energy spinning like a juggler’s plate on one finger.

Dudamel opted for the scenic route in the two middle movements. The speed for the Andante was perfectly judged, relaxed in mood with a scherzando undertow. Played like this, it could have happily resettled in the ‘Pastoral’ Symphony. With musicians now of world-class calibre, Dudamel couldn’t resist asserting the Scherzo’s spectral qualities, to the degree that it sometimes sounded like a Sorcerer’s Apprentice prototype. The playing, though, was marvellously animated and responsive, the pianissimo pizzicato passage a miracle of control and veiled colour, and the lead into the finale, with the trombones letting rip with their eerie prescience of the symphonic future, returned the Fifth to its familiar but still startlingly original and powerful tautness. The quality of the playing was probably the best I’ve heard from this orchestra, marked by the sort of independence of line that is nevertheless uniquely interdependent – something many an older orchestra would covet.

It was a Fifth to treasure, whereas the Wagner was a disappointment. As the familiar themes rolled by, I realised I was getting bored. The Gods entry into Valhalla relies on the undermining of their confidence by the Rhinemaidens’ plaintive warnings, which here were the aural equivalent of a generous squirt of aerosol cream on its unruffled surface. The Götterdämmerung extracts, however magical Siegfried’s off-stage horn calls, reminded me how much of the music is tailored to cover scene changes. The opening of ‘Forest Murmurs’ made complete sense of the placing of the cello and viola legions, and I much admired the tact of the double basses’ incremental entries and the long-sustained horn pedal-notes, but it was all more gloss than substance.

The sequence seemed to be pointing towards a Ring symphony (there is one, by Henk de Vliegen, and Lorin Maazel concocted a Ring Without Words), but it bore scant relation to Wagner’s plan. For once I had some sympathy for those providing the dribbles of applause between ‘movements’, which added to the feeling of mystification. Again, though, the playing was exceptional. Dudamel has developed a remarkable elision of sound, which both breathes and is seamless, and was heard at its most effective in the spellbinding encore, the ‘Liebestod’ from Tristan und Isolde, an act of gigantic intimacy and redemptive on many levels.