Brahms
Variations on a Theme by Robert Schumann, Op.9
Liszt
Soirées de Vienne – Valses-Caprices d’après F. Schubert, S427: No. 5, in G-flat; No.6, in A minor, No.7, in A
Prokofiev
Tales of an Old Grandmother, Op.31
Mussorgsky rev. Rimsky-Korsakov; arr. Konstantin Chernov
Night on the Bare Mountain
Prokofiev
Piano Sonata No.7, in B-flat, Op.83

It has been five years since I last heard Simon Trpčeski in a solo recital, and it was reassuring that the pianist and general musical dynamo from Macedonia still radiates the freshness, insight and communicative skills that singled him out twenty years ago, when he was barely out of his teens. Perhaps one shouldn’t infer too much from body language and photographs, but they do imply a compelling mix of energy, quizzical humour, and a profound, far-sighted musical judgment. The humour was in evidence in the way he waited for a horde of late-comers to settle with a patient hauteur worthy of Dame Edna Everage – and it is probably no longer worth recording that the more eager fans were fearless in filming and recording him this evening. 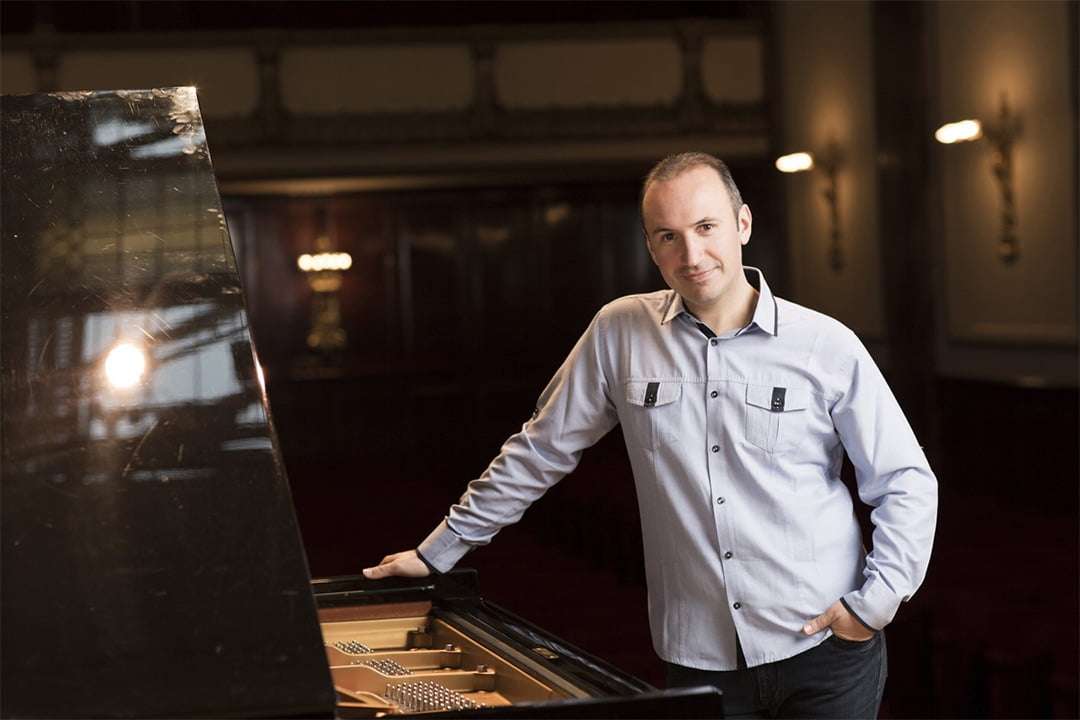 The judgment and discernment, along with his talent to wrong-foot those there for his undeniable barnstorming virtuosity, were there in abundance in the first piece on his programme, Brahms’s Sixteen Variations on a theme by Robert Schumann, in a performance that dug deep into the music’s constant deflections into veiled secrecy. Brahms wrote them the year after his momentous first meeting with Robert and Clara Schumann in 1853, and inexplicably they are rarely programmed. The theme is the fourth of Schumann’s Bunte Blätte, and Brahms dedicated the set to Clara in the wake of her husband’s first suicide attempt. Trpčeski’s perceptiveness is a given, but he surpassed himself in the way he presented these Schumann Variations both as a product of the young, audacious pianist/composer and as a herald of the introspective depths of his late piano music. The care Trpčeski took with layering tone and weight, so that Schumann’s solemn theme sometimes became an almost subliminal presence, made the music by turns tender, capricious and suggestive. More than that, though, he made it easy for us to imagine Brahms alluding to the characters – Robert, Clara – in the ménage that so profoundly changed the course of his life.

It set the bar high for the evening as a whole, and Liszt’s Soirées de Vienne, his transcriptions of Schubert dances, sounded slight by comparison, although the quality of Trpčeski’s playing effortlessly embraced the sheen of sophistication that Liszt adds to the charm of Schubert’s little waltzes. Just occasionally you wondered if they need delight us quite so long, but resistance to Trpčeski’s lightness of touch, a cultivated sense of colour and shade, and his lightly-worn virtuosity was futile. His pedaling was subtle in the extreme, which showed off the seamless strength of his legato playing to its best advantage, and he directed Liszt’s objective appropriation of another composer very stylishly.

After the interval, Trpčeski kept his audience waiting a bit longer for keyboard fireworks with Prokoviev’s Tales of an Old Grandmother, four technically straightforward pieces with no titles to give a clue as to what Gran is talking about. Trpčeski’s oblique way into the second piece increased the mystery of the music’s stealthy harmonies, and a keen sense of hesitancy in the third’s march rhythm opened out multiple interpretive possibilities. He has included this work on his most recent CD, Tales from Russia (Onyx), as he has the Konstantin Chernov transcription of Rimsky-Korsakov’s revision of Mussorgsky’s Night on the Bare Mountain, which was the point when keyboard showtime kicked in. Trpčeski worked hard to give us the full demonic carnival, but the arrangement needs a bit more Mephistophelian filler to cover the passages where the frenzy falls a bit flat. He was more persuasive in the quiet, religioso end, but that’s not really what you want from Mussorgsky’s stupendous and hellish vision.

Trpčeski finished with the unexpurgated anguish of Prokofiev’s ‘War’ Sonata No.7, in a performance that almost overdid the work’s spectacular nihilism. Trpčeski’s fury made the relief of the central Andante caloroso sound unusually imposing, and then he tore through the relentless finale like a racing driver whose car is on fire. With good reason, it brought the audience to their feet. He was generous with his encores, a March and a Humoreske Scherzo from Prokoviev’s Op. 12, Brahms’s familiar Waltz in A flat from Op. 39, and finally Shchedrin’s Humoreske, which showed off Trpčeski’s skills as an entertainer.