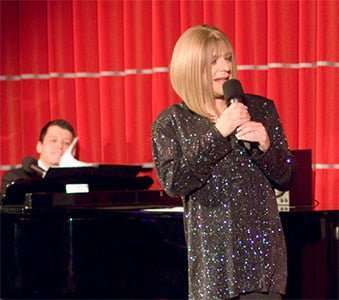 A singer with such an individual style, box of vocal tricks and identifiable mannerisms as Barbra Streisand would seem to lend herself to caricature and exaggeration, but Steven Brinberg’s superb manifestation of her skilfully resists any temptation to overdo the shtick and presents a subdued but uncannily accurate portrayal of Streisand that beguiles and bewitches. From the opening moments of his entrance humming ‘Hello, Dolly!’, Brinberg holds the audience rapt as he sings more than a dozen songs, most connected with Streisand in some way.

With his tight-fitted black-and-silver spangled gown and pudding-basin hairdo, Brinberg looks the image of Barbra, and besides reproducing her timbre, he also sounds like her when he talks. He (one should perhaps write ‘she’) punctuates the act with some amusing satirising of Streisand’s publicised traits and behaviour but, though a little wicked, the self-deprecation is always affectionate. On her superstar status, she states that “Nobody tells me ‘no’!”. One of Streisand’s wishes not yet fulfilled is to appear in another film version of Gypsy. Ironically, though Brinberg’s mellower approach to up-tempo numbers, with less stridency and affectation, certainly sits well with those like myself who are not among Streisand’s greatest fans, Gypsy’s show-stopping ‘Some people’ needs more fervour and determination than Brinberg seems willing to expose.

He certainly brings the necessary drama to one of her trademark songs, ‘Don’t rain on my parade’, but it is plaintive ballads like Jerry Herman’s ‘Love is only love’ and her film songs, from The Way We Were, ‘Evergreen’ (A Star is Born), and ‘Papa, can you hear me?’ (Yentl) – to which Brinberg presents Streisand at her most seductive and endearing. The song of regret, ‘Didn’t we?’, is prompted by the recollection of an interview by David Frost, who personally requested the number, and she points out that when she appeared at a charity gala hosted by Barack Obama, the astronomically priced tickets guaranteed audience-members a meeting with the US President, “but they didn’t get to meet me.”

Brinberg has an astounding gift for mimicry – initially his Streisand was just part of an act of impressions – and he showcases this skill in one number, Sondheim’s anthem to longevity, ‘I’m still here’. In a tour de force he envisions the number as done by a host of divas who each sing a few lines with devastating if campy accuracy. Starting with a very funny Eartha Kitt and continuing with Lena Horne, Maggie Smith, Katharine Hepburn, Judy Garland, Bette Davis (hilarious), and Carol Channing, it is sheer magic. Another comedy highlight is ‘You don’t bring me flowers’, based on the duet that Streisand recorded with Neil Diamond – this has to be seen and heard to be believed. Brinberg, who is accompanied throughout by the supreme Nathan Martin, also brings on a guest performer at each show. The night I attended it was Lewis Bradley, who sang a splendidly rousing ‘I can’t stand still’ from Footloose, plus a number from Wicked, which he was recently in.

Not all Brinberg’s programme is predictable. For The Way We Were there were several title-songs written and rejected and Brinberg treats us to the haunting number which came a very close second. He also sings a number written by Marvin Hamlisch and the Bergmans for a proposed reworking of Michael Bennett’s production, Ballroom, which deserves a revival. Less surprisingly, he includes a second number from Funny Girl (“my latest Broadway musical”), the popular ‘People’ which, like most of Brinberg’s act, gets a warm response from an enchanted audience.