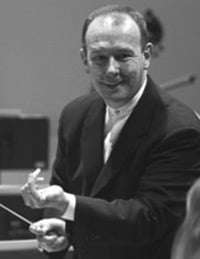 Sinfonia Cymru can’t exactly claim to be the Welsh equivalent of Venezuela’s “El Sistema”, but, since forming in 1996, its express purpose is to give young musicians intent on a professional career crucial performing experience. In the process, it certainly succeeds in creating its own particular buzz. Sinfonia Cymru is primarily a chamber ensemble, with necessarily changing personnel of newly graduated or graduating students, but all come together once a year for big-guns repertoire. And, while there may not be any twirling of instruments, their shining commitment and the total dedication of conductor and founder Gareth Jones make these concerts memorable.

One of the most impressive things about Gareth Jones’s partnership with these youngsters is the discipline he instils. Not only do they achieve a precision that belies both their age and the time they have spent as a corporate group but – such is the schooling – they are able to respond immediately and instinctively to their conductor’s bidding. It permits a wonderful flexibility and spontaneity, and nowhere was that more evident than in the opening Debussy. The lovely tone of principal flautist Aine Lambert captured the languid sensuality of Debussy’s scoring and Jones’s realisation of a shimmering haze in the muted strings could not have been more apt. The gradual crescendo was tightly controlled, yet it didn’t impede the natural fluidity of the exchanges between faun and playful nymphs.

That responsiveness makes the orchestra a sensitive accompanist, hence the readiness of some of Wales’s best singers, among them Bryn Terfel and Dennis O’Neill, to work with them. This occasion had a special interest for admirers of Rebecca Evans. Her recent transition from the role of Susanna to that of the Countess in “Le nozze de Figaro” reflects the development of her voice and also the affinity of Mozart singers for Richard Strauss suggested that her first foray into “Four Last Songs” would also be significant. So it proved.

While the colour of the lower part of her register has enriched her tone palette, Evans has nevertheless been able to retain the overall integrity of the instrument, spinning long legato lines with radiant ease. Here, the palpable sincerity and freshness of her interpretation was underpinned by an almost instrumental suppleness. This was most apparent in ‘Beim Schlafengehen’, in which she soared and swooped with a swallow’s grace, yet in the final song, ‘Im Abendrot’, it was the emotional depth she brought to the word “einsamkeit” that set the seal on this auspicious performance.

Big-guns repertoire doesn’t come bigger than Mahler’s Sixth Symphony and hearing such a piece in the hands of such youngsters was in itself an ear-opener, not least for making one muse on the label “Tragic”, never used by Mahler himself, that has become an appellation to this work. On the Sixth’s other burning question, the order of the inner movements, Jones opted for scherzo before slow movement and made that work. After the stirring first movement, it was his subtle handling of the scherzo’s trio sections and their atmosphere of childlike innocence that sounded especially well. After this, the Andante had an entirely logical feel, calm, even serene. It meant that, in its turn, the massive finale carried a structural solidity and inevitability which helped counterbalance the bleakness of the march of fate and allowed Jones’s periodic injections of urgency to ratchet up the tension, with the great hammer-blows only reinforcing the awesome effect.

Under its leader, Gwenllian Richards, the quality of Sinfonia Cymru’s playing was remarkable, with all the principals acquitting themselves with aplomb, but first-horn Iestyn Porter’s wonderfully fluent solos and those of principal clarinettist William Stafford were outstanding. And. for all the music’s ironies and angst, it was undoubtedly these young people’s implicit optimism that allowed Mahler’s idyllic evocation of pastoral tranquillity and cowbells to imprint itself with an almost equal force.