Sinfonia d’Amici and its founder-conductor (and pianist) Harry Ogg seem to going places as they cross the river from being exceptional students to making their ‘orchestra of friendship’ of professional status. Their main strength, aside from talent, seems to be togetherness, for the personnel of Sinfonia d’Amici, formed in 2009, is very much the same today as then. The players’ collegiate response, dedicated playing, and faith in their conductor informed this generally excellent concert.

It was a very attractive programme, one that challenged the performers, from which they emerged unscathed. Richard Strauss’s Death and Transfiguration, unlike some of his other symphonic poems, holds its freshness, and was here given an outing of exquisite expressiveness and emotional urgency. Ogg is not one to linger and saw the piece whole, the opening gloom, the final resting place of someone dying, had dignity (if with some imprecise chording) and a sense of direction. If the striving allegro was absent its cueing timpani stroke – to my eyes the player thought twice of then putting it in the wrong place, leaving us with a ‘naked’ tuba – it was suitably fevered. But the brass was far too loud, ear-splitting in itself and rampantly overriding the rest of the orchestra, a few short in the strings anyway (although at least it was five double basses rather than the published three), although antiphonal violins were an aural plus-point; here was a case of underestimating this venue’s very lively and vividly projecting acoustic. Nevertheless the performance was strong in character, tender and powerful as required, very well rehearsed, and the ‘transfiguration’ itself was movingly prepared for and thrillingly delivered. 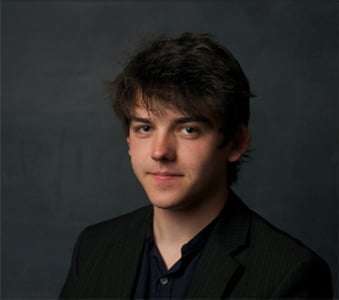 Camille Saint-Saëns’s B minor Violin Concerto is these days a rare bird in the concert-hall; a pity for it’s a very attractive piece written with the skill typical of this underrated composer. 24-year-old William Melvin gave a fluent and focussed account of the solo part, and does much credit to the Royal Academy of Music. Not every note was true on the night, but his accomplishment was obvious; nor was he tempted to highlight the virtuosity required to wade through the torrent of notes; rather he always made music. Ogg and Sinfonia d’Amici offered a vital and sympathetic accompaniment, sometimes abrasively loud, again, but there was a fine rapport between all. Perhaps the barcarolle slow movement could have moved along a little quicker – it was a little studied, lacking what can be a beguiling impromptu quality – and the coda would have benefitted from quieter playing to reveal its starlit suggestiveness. The ambitious finale, once passed its preparatory pages, mixes fireworks, chirpy chorale and religious repose, ending joyously and prancing and was brought off with verve. William Melvin made a big impression; his splendid musicianship and technique surely guarantees him a notable career.

After the interval, Jean Sibelius’s great Seventh Symphony, that remarkable concentration of symphonic form into a single movement in which nothing is missing: a glorious summation of this supreme composer’s search and fulfilment to do exactly what he achieved in this work, its evolving structure filled with the most sublime music. With Sibelius 7 one is aware of a Symphony that respects the hallowed form while compacting it into a short space (20 minutes or so) and also an immense and inimitable world.

Put simply, the assured 22-year-old Ogg and Sinfonia d’Amici (its members of a similar average age) gave a remarkable performance of this masterwork, the playing precise and burnished (not least in the strings’ rich polyphony and the noble trombone solos), the musical journey made indivisible (beautifully timed) and inevitable, grace and tumult encompassed, and with a very real sense that nothing could follow it – save that masterly one-movement symphonies have indeed come along since, those numbered 3 by Lennox Berkeley, Roy Harris and Oliver Knussen, for example, each lasting about fifteen minutes. Ogg’s admiration, understanding and trust in Sibelius’s score were palpable and his musicians were with him all the way. There seems little doubt that Sinfonia d’Amici is and could be a significant addition to London’s already-rich musical fare; hopefully the right circumstances – not least all-important financing – will allow it to continue and be successful. Future plans include La bohème, The Rite of Spring, and Mahler 5.