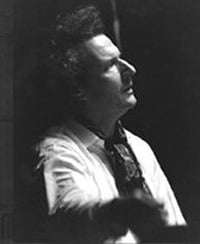 Fifty years to that date (and day) Sir Colin (as he became in 1980) and the LSO remain a palpable force (he is now President having become the Orchestra’s longest-serving Principal Conductor, 1995-2006). It was though an odd programme for such an occasion, a pairing of works that meant trombonists, percussionist (save timpanist) and exotic woodwinds were excluded; and there were no surprises or speeches on the night. There were though tributes to Sir Colin in the programme-book, from Mitsuko Uchida, Anne-Sophie Mutter, Evgeny Kissin, Ian Bostridge, Felicity Lott and others.

Of course, Mozart (his music a constant companion to Davis) should be present. Symphony 40 was fleet, graceful and malleable, hugely concentrated yet opening up an immense world, the slow movement both public and private, the Minuet heavy of tread (the Trio a beguiling contrast with Elysian winds), the finale a vacuum but bursting at the emotional seams.

It was also surprising for a concert celebrating Colin Davis and the LSO that the bulk of the programme should be a piano concerto, albeit a first – this was Nelson Freire’s debut with the LSO (strange but true). Not surprisingly from two such selfless musicians, the performance (finely launched by Timothy Jones’s horn solo) proved a notable collaboration, Brahms, and only Brahms, mattering, Freire commanding and poised, his super-virtuosity clarifying Brahms’s extravagant demands and his dynamic range never allowing sameness to creep in (Freire has made distinguished recordings of both of Brahms’s piano concertos).

With LSO strings at full strength, this was Brahms both grand and demonstrative, although the woodwinds lost out at times (and timpani strokes could be bludgeoning). There was much to ravish the senses, not least in the slow movement, which enjoyed particularly eloquent cello solos from David Cohen (a guest from the Philharmonia Orchestra) and bewitching clarinet contributions from Andrew Marriner and Sarah Thurlow to signal a particularly rapt episode that took this Andante to somewhere around Largo! Freire was equally sensorial in his quiet, lightly touched playing, and both he and Davis found a delightful lilt and a sense of fun in the finale.