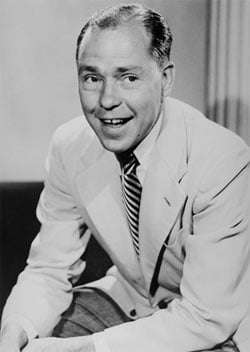 Johnny Mercer (1909-76) was one of the most talented writers of popular songs to have come out of the United States in the twentieth-century. In the course of a long writing career, although a relatively short life, he wrote over 1,700 songs, many of which became standards almost as soon as they were published. He mostly wrote lyrics although did also compose music for some of his songs and he collaborated with about two-hundred composers, probably the most any lyricist has worked with and it was said in his day that he would work with whoever turned up first in the morning. Not an easy man or even a nice man, and a self-confessed nasty drunk who was always having to apologise for his misbehaviour at parties, he was, however, such a prolific artist that he stands besides those other writers of the Great American Songbook, the Gershwins, Irving Berlin, Cole Porter and Jerome Kern.

His work with Kern gave the world ‘I’m Old Fashioned’ and ‘You Were Never Lovelier’, both written for Fred Astaire, and ‘Dearly Beloved’ but he also wrote with other composers and created any number of hits that have become classics. With Hoagy Carmichael he wrote ‘Skylark’ and ‘Lazy Bones’, with Harry Warren ‘Jeepers Creepers’ and ‘You Must Have Been a Beautiful Baby’, with Victor Schertzinger ‘I Remember You’ and ‘Tangerine’, with Jimmy Van Heusen ‘I Thought About You’, and with Richard Whiting ‘Too Marvellous for Words’ and the all-time anthem for Tinseltown, ‘Hooray for Hollywood’. By himself Mercer wrote the words and the music of ‘Dream’ and ‘Something’s Gotta Give’.

However, it is generally considered that his best work was done in collaboration with Harold Arlen and their songs include ‘Blues in the Night’, ‘I Had Myself a True Love’, ‘This Time the Dream’s On Me’, ‘My Shining Hour’, ‘One for My Baby’, ‘Ac-Cent-Tchu-Ate the Positive’, ‘Out of This World’, ‘Come Rain or Come Shine’ and ‘Any Place I Hang My Hat Is Home’. Most writers would give their eye-teeth to have written just one of those lyrics, but just they poured out of Mercer.

Born in Savannah, Georgia (the Southern states informed much of Mercer’s writing) Mercer wanted to be an actor but instead became a singer and then a song-writer, working mainly in Hollywood from the 1930s and later on some Broadway shows such as “Top Banana”, “Li’l Abner”, “Saratoga” and, for London, “The Good Companions”. He was nominated for nineteen Academy Awards and won four, namely ‘On the Atchison, Topeka and the Sante Fe’ (“The Harvey Girls”, starring Judy Garland, with whom he had a long-standing affair and about whom he wrote ‘I Remember You’); ‘In the Cool Cool Cool of the Evening’ from the Bing Crosby film “Here Comes the Groom”; ‘Moon River’ for “Breakfast at Tiffany’s” (with Audrey Hepburn) and ‘Days of Wine and Roses’, the title song from the Blake Edwards film about alcoholism, in which Mercer reflected on his own hard drinking. Amongst his other achievements was the founding of Capitol Records. He contributed more than most to the American music industry and left a lasting legacy of material that will never die. 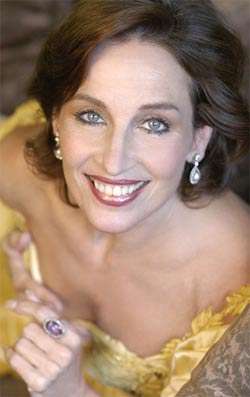 For her set at Pizza on the Park Andrea Marcovicci includes Mercer’s first-ever song, which is best forgotten, but then includes two-dozen or so of the numbers that represent the writer at various stages of his career. Interspersed with the songs are details of his life that go towards explaining why he was so driven. Marcovicci has a very ‘English’ way of enunciating clearly because she wants us to hear Mercer’s beautifully constructed lyrics. In this respect she likens herself to Julie Andrews, agreed – more Julie Andrews than Jule Styne!

Marcovicci begins with ‘Skylark’, that beautifully modulated Hoagy Carmichael melody in which she takes flight and soars with the words that epitomise Mercer’s Southern upbringing. Like Frank Loesser he dealt with the everyday and the topical but translated them into real poetry. ‘Moon River’ was about his childhood in Georgia and indeed the Savannah River is now called Moon River in his honour.

Mercer wrote his own music for ‘Something’s Gotta Give’, a typically upbeat number that celebrated love as did many of his songs in different ways. ‘I’m Old Fashioned’ and ‘You Were Never Lovelier’ are two Kern melodies in which Mercer reached the heights of romantic lyric writing. It is odd that he could write about love so beautifully and yet was fairly tortured inside, mainly because he never ever got over Judy Garland who married David Rose to try to end the affair. The in-between comic- and love-song is illustrated by ‘You Must Have Been a Beautiful Baby’ (remember when Maurice Chevalier sang it to the Queen Mother?), which is half-romantic and half sheer amusement. Then there are ‘Too Marvellous for Words’ and ‘PS I Love You’, two unconventional love-songs. All these Marcovicci explores with great élan. She is a wizard with words, timing her phrasing impeccably, and a real magician with music who can take a line so far and reel it back in. It is such a pleasure just watching her perform and with this material she is ace.

The Harold Arlen songs really do stand out and numbers like ‘Ac-Cent-Tchu-Ate the Positive’, ‘That Old Black Magic’, ‘One for My Baby’ and ‘My Shining Hour’ are proof positive that Mercer and Arlen were joined at the hip as far as song-writing was concerned. That’s not to say that Mercer’s other collaborators were small change, but that Mercer probably brought out the best in his chosen fellow creators. Andrea Marcovicci pays a great tribute to Johnny Mercer in her show and reveals that she is the ideal interpreter of the work of one of the all-time great American songwriters.