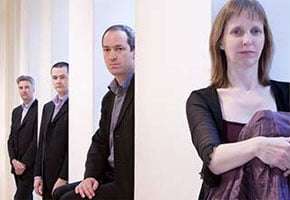 The Cutting-Edge series of recitals at The Warehouse continues to offer an interesting cross-section of music by contemporary British composers, along with relevant contributions by European figures past and present. Thus this programme from the Smith Quartet, whose zeal for commissioning and performing new repertoire continues unabated as the ensemble approaches its 20th-anniversary.

The evening began with a work by Christopher Fox – his 1-2-3 (2006) involving imaginative interplay between consonant intervals and shifting metres (something that was to feature in all these pieces), with the three-part formal division keeping one in suspense until the melodic crystallisation towards the close. Ligeti, Terry Reilly and even Ian Drury all left their mark on the musical content, which proved as entertaining and as deftly provocative as have previous works from this always-intriguing composer.

Whether or not Howard Skempton’s Tendrils (2004) was a natural progression, the way in which its “continuous unfolding of undulating lines” (to quote the composer) continued for almost 20 minutes without the merest hint of – or, moreover, need for – expressive intensification was a tribute to the coherence of a process that is at once the work’s basis and focal-point. Warmly but never indulgently played, it underlined the seeming ease with which Skempton has transferred his musical thinking onto a larger canvas in recent years. Who would bet against him titling a piece ‘Symphony’ in the future?

Michael Finnissy is no stranger to large-scale projects, and if the premise of his Six Sexy Minuets and Three Trios (2003) is the minuets and German dances such as Beethoven and Schubert wrote in the midst of their seminal opuses, the means by which the sequence unfolded over 25 minutes ensured its more substantial impact. The use of ‘found objects’ alongside strings – with one piece devoted to them in a not-so-virtual equivalent of quartet writing – often took precedence in the musical scheme of things. Whether the intended dialogue with modern culture was more apparent than real, then the lyrical intensity of the concluding piece confirmed that there was true substance behind the façade.

Logistical factors presumably accounted for the omission of what would have been a first London outing for Louis Andriessen’s Miserere. Instead, the Smith Quartet offered three movements (numbers 1, 2 and 5) from Kevin Volans’s breakthrough work White Man Sleeps – engagingly played here, even though the music now sounds rather passé (which it may not do in the years to come) – and also a performance of Andrew Poppy’s recent quartet piece Hatch. Typical in its treading the finest of lines between ‘art’ and ‘popular’ idioms, this is a testing assignment that the Smith Quartet brought off with aplomb, even if any greater sense of exhilaration remains tightly locked within the music’s pervasive rhythmic contours.

Something that one could never say of the First Quartet (1945) from Conlon Nancarrow. Given that the player-piano music that makes up the bulk of his output has been widely disseminated, it makes sense to explore the ‘manual’ works at either end of his career. While seemingly a graduation piece, its intricate counterpoint and control of musical momentum (ostensibly in the lineage of works such as Copland’s Short Symphony) are already fully characteristic of the mature composer; notably in the steady rhythmic agglomeration through which the finale reaches a hair-raising close. A fête to which the players again did justice – so ending this lengthy and demanding programme on a veritable ‘high’.