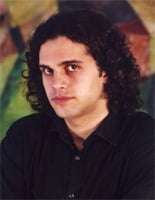 This was the 29-year-old Soheil Nasseri’s London debut. He studied with Karl Ulrich Schnabel until 2001 – and then stormed New York with spectacular recitals, giving 18 different (and memorized) programmes. He’s given a further 60 concerts to school pupils and promotes new music. Nasseri dresses in black. He gives the audience a low bow, from the waist, but is otherwise tall and remote. He played no encore. (Agreed – an encore should not be considered de rigueur.)

Kaikhosru Shapurji Sorabji (1892-1988) was a British composer (he was born in Chingford, Essex) of Parsi, Spanish and Sicilian descent. He wrote extensively for piano, often at gargantuan length and with horrendous complexity. The early and lost Sonata No.0, which was found in the 1980s, lasts a mere 25 minutes. It is in one movement, atonal and non-tuneful, romantic and concordant, juxtaposing a constant harmonic scheme with varying configurations, often terse – an authoritative musical intelligence is at work, capable of surprising and sharp-minded shifts of musical scene, expressing the thoughts of a solitary pedagogue rather than the creations of a lover.

Under Nasseri’s nimble fingers, Sonata No.0’s difficulties were non-existent. The performance had an easy flow and a relaxed mood, but was also quick-witted and conscious of shifts of inflection. This was a technical tour de force. (Sorabji considered most pianists were insufficiently proficient to perform his works.) Whether Sorabji had more to communicate emotionally than Nasseri perceived remains a question.

After responding so assiduously to such strenuous technical demands, Nasseri deserved a break. He took it in the Beethoven, a Sonata notable for the opening Variations and the Funeral March that follows. Nasseri’s playing was rather sedate, but gracefully phrased and taken at an unhurried pace, looking back to an earlier era – to the music’s gain. This Beethoven was also unexpectedly docile, even in the Funeral March – no lion of the keyboard. I recalled Bottom’s offer in “A Midsummer Night’s Dream”: “I will roar you as gently as any sucking dove.”

In Brahms’s 16 Waltzes, Nasseri gave an intellectually competent and differentiated survey of the composer’s multiplicity of styles – resplendent vigour and fibre; lovingness, tenderness and longing. Emotionally, Nasseri fell somewhat short. He sounded rather in awe of Brahms’s demands, playing the moods gingerly – a little ungraciously and without lilt or, often, legato.

In the Schumann, I heard what I had missed. This was magnificent and committed playing – technically, emotionally and interpretatively. Schumann’s disposition fell under Nasseri’s fingers naturally. With unforced fluency, he expressed both Schumann’s delicacy of feeling and his robust declarations. Adroitly and perceptively, he gave respect to even slight turns of phrase, sometimes heightening them by refined, almost imperceptible, rubato. He understands Schumann’s energy instinctively. The sombre themed Variations impressed, even though the solemnity of the Theme’s reprise was a little too hard-won. In the finale, his ‘prestissimo possible’ maintained a frenetic pointedness and clarity.