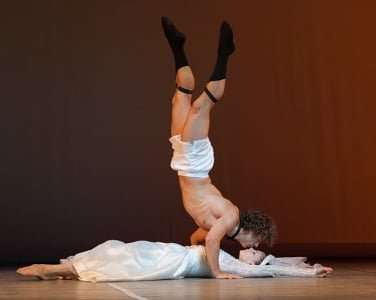 This is a brave programme indeed by the Russian superstars Natalia Osipova and Ivan Vasiliev. They could easily tour the world, cranking out virtuoso pas de deux from the repertoire and raking in the cash, but instead, this interesting duo have chosen to explore contemporary choreography at a much younger age than some of their compatriots who, having grown too old for Classical Dance have only then turned to modern. The motor is Osipova, who intelligence and questing personality have led her to explore further both herself and her art form.

Let it be said from the outset that the decision has paid off, and both bring youthful verve and physical strength to the three duets. Both dancers possess an impetuosity and a hunger which have seen them tear up the rule book of what good ballet dancers should do – not only did they both leave their dance home, Moscow’s Bolshoi, but they have not settled, preferring a nomadic life from which they can cherry pick what interests them. Osipova is, for now at least, at London’s Royal Ballet, with copious amounts of external performances around the world, whereas Vasiliev was at American Ballet Theatre for a while but is now a roving guest artist. They were a couple off stage and are no longer, but their understanding of each other as people, as artists and as dancers means that they still perform together, able to envisage filling the London Coliseum for nearly a week solely on the pull of their names. 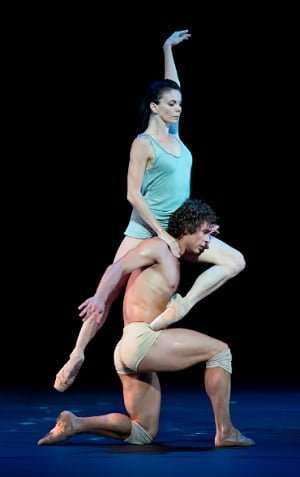 Production standards are high, so the first and third pieces benefit from live music, and the third from Jean-Marc Puissant’s stage designs and costumes. It comes across as a slick evening, and does much to dispel any doubts over value for money. The key is, of course, their dancing. Vasiliev remains a miracle of the human body, his short, bulky frame invested with both power and pantherine grace and displaying prodigious strength in his partnering. If truth be told, he has not come as far as Osipova in terms of stage character or insight – having played gravity-defying but generally unsophisticated ballet heroes all his stage life, he does not yet radiate either personality or character in the way of Osipova. She has come very far indeed, and these three pieces show her to be a stage presence of mesmeric power. Her elfin looks are infinitely changeable and no physical challenge, be it the frightening cantilevered balances of Ohad Naharin or the table thumping fado of Pita, appears of the slightest difficulty. She takes risks, pushing herself and her body to the limit, and the audience is rewarded with dancing of undeniable density and focus.

Sidi Larbi Cherkaoui, known to London audience for his work at Sadler’s Wells, provides Mercy, a multi-facetted duet that begins with discomforting physical violence, Vasiliev kicking, punching, even throttling Osipova without touching her, their physicality akin to the non-contact of capoeira. It is a demonstration of the potency of Cherkaoui’s choreography that the audience is reviled by the suggestion of violence rather than its reality. The work progresses thereafter with Osipova’s ‘softening’ of Vasiliev in episodes of controlled and expressive movement. Osipova bends and contorts over and around him, and he, too, indulges in much ground-based motion, swirling, turning, twisting. One section sees him seemingly control her movements, limbs raised, turned, lowered by the command of his hand, lifts seamlessly interwoven into the choreography until its resolution where tenderness has finally replaced violence. It is potent stuff, powerfully danced to the evocative baroque sound of L’Ensemble Akademia.Of more variable quality Passo, Ohad Naharin’s duet that opens with Osipova displaying extraordinary physical control in slow movements, and precarious balances. For this we have Autechre’s soundscape, replete with borborygmic electronic burblings, its flatulence inexplicably giving way to a recording of English folk music, Greensleeves et al. Vasiliev joins her firstly in copycat movement and then in twitchings, gesturings, and tics of undefinable purpose. This becomes contemporary dance of the silly walks, face-slapping variety, all underlined by Naharin’s own dance technique ‘gaga’. Cleverly, the piece ends with something approaching a comic duet in which Osipova in particular displays great comedic talent. It is not a worthy vehicle and while the dancers may learn about themselves in performance, the audience learns next to nothing about dance.

Arthur Pita is a talented dance maker, with an innate sense of theatre that borders at times on theatricality. His Facada is tongue-in-cheek take on the revenge of the jilted bride and provides Osipova many opportunities for exaggerated sobbing, Vasiliev the chance to divest himself of his clothes (as a dancer, he seems to spend more time in his underwear – here white boxer shorts – than clothed). It also contains the impossibly elegant Elizabeth McGorian as Lady in Black, who stalks the stage with a poker face and provides Osipova’s jilted bride the wherewithal to effect her revenge. Finally (the work is too long) the theatricality subsides to give way to a pas de deux that at first seems to be one of reconciliation but which then turns murderous, Osipova suffocating the hapless Vasiliev. In a finale of undoubted power, a large table is placed over his prone body, a vase of flowers placed at one end and Osipova dances with increasing ferocity on his grave to McGorian’s silent approbation. Frank Moon, performing his Portuguese fado-like music live on the stage is an added bonus – a talented musician whose compositions add much to an entertaining work that closes a not unrewarding evening.