Assassins
Music & lyrics by Stephen Sondheim, book by John Weidman, based on an idea by Charles Gilbert Jr 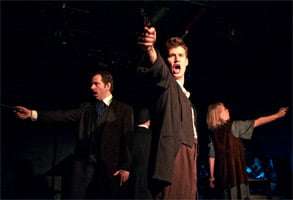 The Stephen Sondheim revivals keep coming to mark the great man’s recent status as an octogenarian. It began a while back with “A Little Night Music” at the Menier Chocolate Factory, the Garrick and ultimately Broadway where it is still packing them in and picking up a Tony Award for Catherine Zeta-Jones. In London Jermyn Street Theatre gave us “Saturday Night” and then “Anyone Can Whistle”, after which came “Company” at both the Union and Baron’s Court Theatres, which is now followed by “Assassins” at the Union, then “Into the Woods” at the Open Air, Regent’s Park (from 11 August), and “Passion” at the Donmar Warehouse (from 21 September). And this week also sees a compilation revue of Sondheim rarities in “Classic Moments – Hidden Treasures” at Jermyn Street from 6 to 24 July. Well, in Sondheim’s case you cannot have too much of a good thing.

In its performance-history “Assassins” has always been given in short runs. The initial Playwrights Horizons’ off Broadway production ran for just 73 performances in 1990. Two years later the Donmar Warehouse in London played it for76 performances. The 2004 Roundabout Theater Company’s Broadway staging (postponed from 2001 because of ‘9/11’) closed after 101 performances but garnered five Tony Awards including Best Revival. Other productions have taken place in Los Angeles and Cape Town, at the Crucible in Sheffield and at New End Theatre in Hampstead, the Landor in Clapham and at the Royal Academy of Music. Perhaps a long run in the US is out of the question as the show’s subject matter, a meeting of the men and women who attempted to kill the US Presidents, is something that Americans in general would rather forget or not wish to be reminded of. 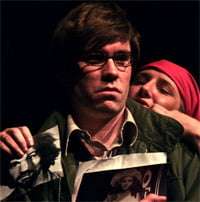 The show covers the lives of nine would-be Presidential assassins, from the two most notorious and successful in US history, John Wilkes Booth, the celebrated actor who shot Abraham Lincoln in 1865, and Lee Harvey Oswald, the Marxist former-Marine who killed John F. Kennedy. In between are the stories of Leon Czolgosz, son of poor Polish immigrants, who shot William McKinley; Charles Guiteau, lawyer and preacher, who wanted to be the Ambassador to France, but then shot James Garfield; Giuseppe Zangara who plotted to kill the Italian King Victor Emmanuel III, then Herbert Hoover and finally Franklin D. Roosevelt – he failed but killed Chicago Mayor Anton Cerrnak instead; Samuel Byck who planned to hijack a plane in order to crash it into the White House to assassinate Richard M. Nixon, but he killed a guard and a co-pilot instead while the plane never left the ground; Lynette Fromme and Sara Jane More who tried to kill Gerald Ford in September 1975 and both failed; and finally John Hinckley Jr who stalked actress Jodie Foster and President Jimmy Carter but shot and wounded Ronald Reagan and three others.

The form of the show in John Weidman’s well-crafted book is a shooting gallery where the game is to kill a President. The protagonists are introduced in the opening number ‘Everybody’s Got the Right (to be Happy)’ and presumably famous for at least fifteen minutes. Is this the American Dream gone sour? They say any God-fearing American citizen can, in theory, become President, but then the other side of the coin might be that anybody can get up and take a pot-shot at the man in the White House. Sondheim presents his characters in a sort of revue-style entertainment and, despite its theme, entertainment it is, albeit an ironic one. It is a serious study of terrorism and madness set within an operatic cabaret. Most of the characters appear to be deeply unhinged, except for John Wilkes Booth who seemed the most rational of assassins with a truly credible grievance and a cause worth fighting for. He wanted to free thousands of Confederate prisoners of war, so first tried to kidnap Abraham Lincoln by holding him to ransom, but, as they say, the best laid plans… In the end he shot the President. 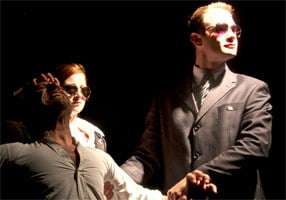 At the beginning of the show, the Proprietor of the shooting gallery hands out the guns to the potential assassins and then the Balladeer takes over and tells their stories. They have one thing in common, their obsessive compulsive behaviour. Most were mentally unstable. Leon Czolgosz was a former child labourer who thought McKinley was an enemy of the state, Guiteau was emotionally unstable with grandiose ideas about his own superiority, Zangara blamed his stomach pains on the upper classes, Lee Harvey Oswald had no sense of self-worth, Samuel Byck picketed the White House in a Santa Claus suit, Lynette Fromme belonged to the Charles Manson cult, and John Hinckley Jr was disturbed in his obsession with Jodie Foster and was sectioned to a mental hospital. Only Booth and Sara Jane Moore appeared, on the surface, to be fairly normal. The rest were definitely two cents short of a dollar. 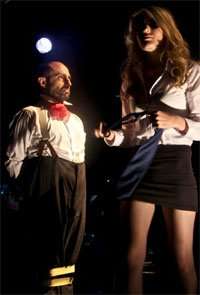 “Assassins” is a grisly tale of the darker side of life, perhaps not quite as gruesome as, say, Sondheim’s “Sweeney Todd”, as it is not such a graphically repellent subject. However, it is a serious look at a strange US phenomenon, although it is far from solemn and it deals in a very mordant kind of humour. Like Sondheim’s “Company”, “Assassins” is a company show. It is therefore difficult to pinpoint particular performances. The ensemble work of choruses is technically spot-on in Michael Strassen’s superbly fluid staging. However, that said, there are stand-out moments. Glyn Kerslake is all-too-convincing as Booth, apparently a sane working actor but with an underlying obsession. John Barr gives a quirky, eccentric performance as Guiteau, something of a clown figure but concealing his true sentiments. Marc Joseph reveals the complete sadness of Oswald’s situation, a loser all his life who just cannot function properly after time spent in the Soviet Union. Nick Holder’s Samuel Byck is a magnificent tour de force of brutal acting and of inhabiting a part with such conviction, that his bogeyman presence is palpably chilling. It is all held together by Nolan Frederick’s Balladeer who sums up the situation in ‘The Ballad of Booth’: “Every now and then / The country / Goes a little wrong. / Every now and then / A madman’s / Bound to come along…”.

Although composer-lyricist Sondheim uses pastiche to deliver his songs in various styles of musical Americana, such as a typical Civil War ballad, a barbershop-quartet number, a march in the style of Sousa, a folksong, a spiritual and even a rock ballad, the score essentially has Sondheim written all over it and it could be by no other hand except where he quotes from ‘Hail to the Chief’, the US Presidential signature-tune that has been used since the time of George Washington. The first production employed just three musicians, although for the original-cast recording a full orchestra was installed. The Union keeps to the trio scoring and achieves a terrific sound out of just a few players under Michael Bradley.

This is an exceptional music-theatre piece about some of America’s most profoundly misguided anti-heroes. Could they have happened here? It’s unlikely because only in America is there that kind of perverse obsession with national heroes. Part of the country puts them up for the highest office while another part is determined to knock them down at any price. That’s the nature of the beast. As they collectively say at the final reprise: “Everybody’s / Got the right / To be different. / If you want to be / Different… / Even though / At times they go / To extremes… / Everybody’s / Got the right / To their dreams.”