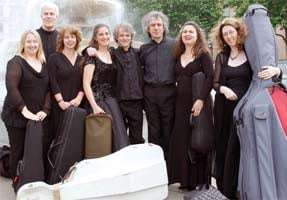 With eight concerts in three days, the music of Johann Sebastian Bach was well represented during the Southbank Centre’s “Bach Weekend”. The rapid turnover of concerts showcasing the composer’s instrumental and vocal music during his Leipzig years gave an idea of the intense creativity and work-related stress that Bach must have endured as he flitted between St Thomas’s church and Zimmerman’s coffee house.

Most of the concerts over the weekend featured the Feinstein Ensemble and its flautist founder Martin Feinstein. In the intimate surroundings of the Purcell Room, their performances recreated something of the atmosphere that must have prevailed at the Collegium Musicum concerts which Bach directed at Zimmerman’s. Lively and informal, they also had their fair share of flaws.

The Ensemble’s presentation of trio-sonatas and quartets by Bach and Telemann was a mixed bag. Bach’s Trio Sonata in E minor is really an arrangement of his Sonata for keyboard (BWV 527), and sounded unremarkable. Despite the cover of Feinstein’s fine flute playing, Alison Bury’s violin emitted some very sour notes, which crept into Telemann’s A flat ‘Paris’ Quartet. Fortunately, these problems were cleared up after the interval, and both Bach’s Trio Sonata in G and Telemann’s Quartet in E minor were warm, well-rounded affairs.

The following afternoon was given over to famous and obscure Bach cantatas. The obscure one, 209, “Non sa che sia dolore”, deserves to stay in the dark. With a nonsensical libretto in dog Italian, it is Bach’s only complete cantata in that language. Wobbly violins wielded by Alison Bury and Sarah Moffatt distracted from the attractive opening Sinfonia, which features a prominent flute part. Faye Newton didn’t seem to have much enthusiasm for the piece. Grainy and flat in the lower registers, she struggled to keep up in the presto passages of the final aria. She was on much better form in the well-known “Coffee Cantata”, 211. She invested much more characterisation in the role of caffeine-addicted Lieschen, although she was ill-matched with a bland Ben Davies as her scolding father. Daniel Auchinloss was a serviceable narrator, joining in with distinction in the final trio.

The final concert presented versions of the orchestral suite from the three giants of German baroque – Bach, Handel and Telemann. This was the most polished of the Feinstein Ensemble’s performances, with precise and cohesive playing by all seven instrumentalists. Even the wayward violins sounded spot-on, while Feinstein clearly relished the challenges for flute and recorder that each composer set before him. The pared-down version of Handel’s G major Water Music suite was particularly fascinating as an exercise in musical economy, while the foot-tapping rhythms of Telemann’s A minor Suite explained the popularity of the form among contemporary audiences.