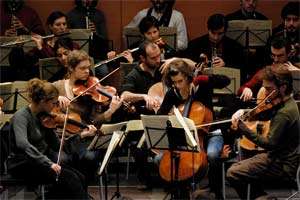 It all started in Formigine (Northern Italy). But Spira mirabilis isn’t quite the “musical revolution” that is claimed for it (the danger of hype misfiring) – the ‘Eroica’ Symphony is though – yet the assertion for these young musicians as being “elite” is fair enough. What we have is an orchestra (seemingly flexible regarding personnel and repertoire) that plays only one work per recital (and while the ‘Eroica’ is substantial enough to justify such a stratagem, at a stroke the entire symphonic oeuvre of Haydn and Mozart is cast adrift regarding a reasonable-length concert). You can add some minutes to the evening through chat – the opening address by Lorenza Borrani, Spira mirabilis’s sassy leader, had wit and charm – but the encoring of the scherzo with the players swarming into the stalls for a Surround Sound and diffuse version detracted, and might also be considered intimidating for anyone who wished to leave. But – and an important point – the scherzo’s reprise did allow the musicians to show their individual memory (the use of scores wasn’t practical) and retain their remarkable unanimity of ensemble, and the horns managed the trio better this time round. A Q & A session followed, which I thought better of. The music should be enough. 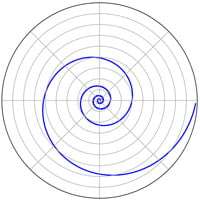 For this occasion, part of Shell Classic International, Spira mirabilis (“geometrical figure of the logarithmical spiral – meaning a spiral where the distance from the origin grows exponentially”) ran to 38 players – two bassists just isn’t enough. A chamber orchestra using modern instruments but with ‘authentic’ leanings is nothing new, indeed they are quite common, although the lack of a conductor is more of a novelty. The musicians’ seriousness of purpose is not in doubt. Each one studies the full score and their own part; they research the music’s history and – maybe not something to admit to – listen to recordings. Did they consult (and then reject) the likes of, say, Bernstein, Furtwängler, Klemperer, Mengelberg, Szell, Toscanini and Weingartner? Are these maestros too ‘in the past’ to be considered? Whatever, the members of Spira mirabilis then rehearse intensively over several days and discuss ideas democratically. All very laudable and lofty.

Yet, the end result was like (too) many other accounts of the ‘Eroica’ today – cloned to be fleet, sparing of vibrato, and lacking dimension. Make no mistake though, it was good, and often impressive, not so much interpretatively, for this was an ‘as writ’ ‘Eroica’, but certainly in the quality of the execution, the players’ unsparing commitment and with incisive accord from first note to last – Maria Alba Carmona (replacing the listed Roberto Baltar) is an outstanding oboist, for example, and Luise Buchberger, leader of the cellos, is pure charisma. But, maybe, the group discussions had eradicated any novel view of the music, for this was a performance with little to distinguish it from many others that favour a back-to-basics approach; thus the ‘Funeral March’ nipped along with little significance and almost became a country-dance at one point.

Things weren’t helped by the London Philharmonic and Vladimir Jurowski having less than a week earlier resurrected (pun intended) Mahler’s re-orchestration of the ‘Eroica’, a nearly 100-strong orchestra presenting a single-minded vision of a great symphony that, even if not kosher Beethoven, had so much more to say about the music, and with a ‘Funeral March’ that had the whole weight of the world on its shoulders.

Maybe the comparison is unfair, for Spira mirabilis was closer to Beethoven’s text, but the contrast is real enough for anyone who was at both concerts, and ultimately what was lacking from the Spira mirabilis account was a palpable sense of singular identity – despite the camaraderie, generous interaction and huge talent on offer. Not that all conductors would have necessarily done this – or even got the opening two chords as spectacularly together as these players managed – but if only someone in the group had suggested not playing the first-movement repeat (maybe someone did) and asking the timpanist to make more of the brief outburst in the recapitulation (he was very demonstrative elsewhere). Maybe there was an outspoken champion (ultimately outvoted) of taking the ‘Funeral March’ as spaciously as the music is profound, and who might also have asked for more from the woodwinds in the climax. And, certainly, if not a decision for themselves, the two trumpeters needed greater restraint and to cultivate a tone less edgy.

How to end? All these Spira mirabilis musicians are precociously gifted, ultra-confident, caring, sharing and idealistic – and they can play the ‘Eroica’ superbly well.