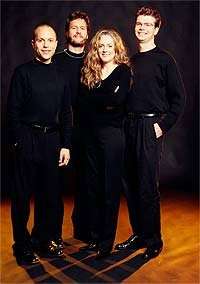 Beethoven was wary of the practice of transcribing his piano works for other instruments, yet undertook a number of such arrangements. The St Lawrence String Quartet, playing with real sensitivity, managed the considerable feat of making the music appear as if it were originally meant for a string ensemble. Geoff Nuttall brought a warm, sweet tone to the piano sonata transcription, and an appropriate sense of levity. His attacks of certain notes died away suddenly, as they might on a keyboard, yet he always managed to maintain the relevance of the phrase. The St Lawrence Quartet’s dynamics were varied yet not overdone, often small in range yet never sacrificing the dramatic atmosphere. The two violins were well matched in tone, and cellist Christopher Costanza had a rich sound. The only weak point was violist Lesley Robertson’s tone, which was dark but hollow, lacking the substance of the others.

The fifth of the Opus 18 string quartets, in A major, was inspired by Mozart’s string quartet in the same key, and it has a Mozart-like lyricism. Scott St John led the group in this piece, and he had a generally bright tone, but could vary his timbre considerably and, at times, quite suddenly, sometimes within only a few inches of a bow stroke. His tonal range along with the group’s dynamical range, expanded compared to the previous work, and made for a suspenseful performance. The breathlessness the artists created during the first movement’s pauses was exhilarating.

The musicians had an uncanny knowledge of the importance of each line. For instance, in the trill-like variation of the third movement, the violins moved in and out of prominence with fine control, at times allowing the lower strings to sing through in their melody, and at times highlighting the virtuosity of their filigree parts. In the finale’s hymn-like second theme, the musicians managed to play the many mid-phrase moodswings as if they were a single instrument. Nuttall matched St John’s brightness of tone when the second violin part was dominant, a reminder that both players were equally qualified to be the leader.

Nuttall gave a short yet comedic speech prior to the opus 130 Quartet, about the pros and cons of playing Beethoven’s original last movement, the Grosse Fuge, versus his later substitution of a lighter finale. Here the latter option was taken, thus allowing the Cavatina to be the centrepiece of the work.

The players attacked this piece with relish and impeccable technical skill, yet the most notable part of the performance was the superb drama of the interpretation, leaving one feeling that this was exactly how Beethoven was meant to be played. There was no holding back in the fortissimos, yet each climax seemed bigger than the next. The suspense was unrelenting. In the first movement, at the ends of the deconstructed phrases, it felt as if the universe was collapsing, and at the ends of the phrases with changing chromatic harmony, it felt like whole new worlds of possibility were opening. The following five movements were no less exciting. The second was fast and propelled. St John, again as the leader, somehow managed to create a bigger and bigger sound in each forte. The lighter third movement was appropriately subtle, yet just when one felt able to relax and breathe, a harmonically weird note came out to seize the attention. The movement’s pianissimo section felt particularly haunted.

The folk-music inspired fourth movement never lost its internal pulse, even when the parts became complex. The ‘Cavatina’ was soft and soulful. The players all used a fast vibrato for a rich sound, and in the middle section, the reverb effect was so huge it was as if Alice Tully Hall had been transformed into a cathedral. In the finale, the clock-like nature of the accompanying parts seemed to signify that the end was near for Beethoven (this movement was his final completed piece of work), yet the performers made it a joyful finish.

In his speech, Nuttall had suggested that the audience listen to the Grosse Fuge as soon as possible on returning home, in order to compare the finales, yet despite a heckler’s request, they did not include it as an encore, instead opting for the Andante from Haydn’s Opus 77/Number 3. Nuttall returned as leader, and highlighted the contrasting simplicity of this work in a finely nuanced performance. His natural comedic persona came out in his exaggerated bodily gestures at the end of an unresolved cadence, bringing loud chuckles from the audience.