This was the third of three Holy Week performances of “St Matthew Passion”, J. S. Bach’s monumental retelling of the story of the Last Supper and arrest and execution of Jesus, by the Boston Symphony Orchestra. This orchestra does not often perform the work, written for the Thomaskirche in Leipzig in 1727. Seiji Ozawa directed the BSO’s most recent complete performances in 1998, and earlier ones in 1985 and 1976. Serge Koussevitzky led the only other complete performances, in 1936 and 1937. Charles Munch performed an abbreviated version in the 1950s. 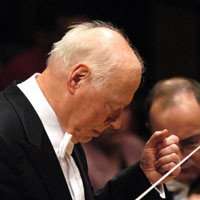 This time the Passion returned to Symphony Hall under Bernard Haitink, who, surprisingly, had never conducted the work before (“St Matthew Passion” is performed annually by the Royal Concertgebouw Orchestra, for whom the 79-year-old Haitink is conductor laureate and was music director for more than twenty-five years). In an interview for the “Boston Globe”, David Weininger asked Haitink why he had never performed the piece with the Royal Concertgebouw. “Because I was never asked”, he replied.

This rare complete performance of the “St Matthew Passion”, one of two surviving settings of the Passion that Bach wrote (the other is “ St John ), lasted a little more than three hours, not counting a fifteen-minute intermission. It was unfailingly interesting throughout.

Much of the credit for its success is due to Ian Bostridge who sang the role of the Evangelist. His superb sense of rubato, clarity of diction and tone, intensive involvement with the words – all the qualities that make him such a sought-after recitalist – were much in evidence and made him a magnificent narrator. Always sensitive to the nuances in both the text and the music, he had many outstanding moments. One of the most gripping was his rendition of ‘Und als er noch redete’ (And even as he was speaking), the arrival of Judas in the garden of Gethsemane . It was superb example of musical declamation, full of drama and intensity.

The performances by the other soloists were always adequate, sometimes breathtaking. Thomas Bauer gave a satisfactory if sometimes less than colorful reading of Jesus. He was at his most apt and effective in ‘Trinket alle daraus’ (Drink you all of it) in the Last Supper segment.

Marlis Petersen and Christianne Stotijn were outstanding. Petersen has a remarkable technique and a wonderfully light timbre. Her aria ‘Ich will dir mein Herze schenken’ (Let me give my heart to You) was beautifully flowing and filled with feeling. She and the highly expressive Stotijn were well-paired, their voices blending splendidly in a sprightly rendition of ‘So ist mein Jesus nun gefangen’ (Now my Jesus has been seized).

Peter Harvey was a solid presence, and Steve Davislim gave a smooth, earnestly delivered performance. Standout soloists in the smaller roles were David Kravitz, who was especially bold and characterful as Pilate and Mark Andrew Cleveland who sang the role of Judas.

Other stars of this performance were Haitink, the choristers and the Boston Symphony musicians. Haitink conducted a finely paced reading full of subtlety and drama. The large choral forces – more than sixty members of the Tanglewood Festival Chorus, together with approximately twenty-five singers of the PALS Children’s Chorus – were directed with sensitivity and great care: and roughness when needed. The Chorales were sung with wonderfully varying tempo and dynamics.

Haitink included ‘period’ instruments (oboe d’amore, oboe da caccia and viola da gamba) in the trimmed-down double orchestra. The BSO musicians were excellent, superbly conveying the full emotional range of Bach’s majestic work – from reverent contemplation to remorseful anguish to vehement anger. The woodwind playing was noteworthy throughout, and Concertmaster Malcolm Lowe was outstanding. This was a powerful and moving performance that did justice to Bach’s magnificent music.