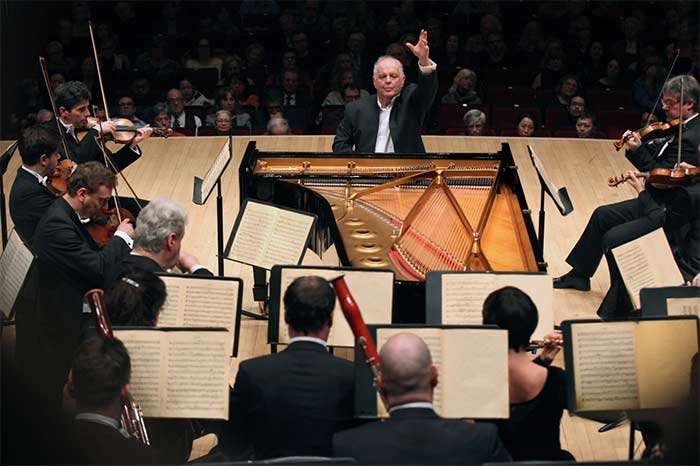 The keyboard writing in K537 is arguably the most florid of all of Mozart’s Piano Concertos. He wrote the work in 1788 to play on tour at a time when significant segments of his audience were losing interest in his music, so perhaps its lavish swirl of scales was meant to win back favor partly through virtuoso display. The result, in any case, can sound atypically and disconcertingly flashy.

Daniel Barenboim molded the orchestral introduction freely, eliciting a lush tone from Staatskapelle Berlin, though the string section was reduced to chamber size. His playing of the solo part, at first heavily accented and choppily phrased, became more fluid as the first movement unfolded. He almost rushed through the flamboyant passagework, turning flurries of scales into larger gestures. Some notes were lost and some details were smudged, but the effect made musical sense.

The central Larghetto, taken at a jaunty pace, had unexpected effervescence; little repetitive figures were pushed along so they seemed to spill over like bubbles from a bottle. The Finale was similarly energetic, yet never felt breathless, thanks to Barenboim’s deft use of rubato. He sometimes lets his foot sit too heavily on the sustain pedal, creating blurry washes of sound that counteract the music’s crystalline character, but the overall result was of lithe grace in music that can easily come across as clumsy (by Mozartean standards, at least).

One could say that Barenboim took a similar approach to Bruckner’s Fourth Symphony in the way he smoothed over the music’s jagged edges and found ways to dovetail even the most jarring transitions. In his hands, the music flowed easily, conveying both assurance and inevitability. It all made perfect sense, and with consistently superb playing, was quite beautiful in its own way. There were memorable moments: Ignacio Garcia’s evocative reading of opening horn solo; the warm, singing tone of the cellos in the slow movement; and sweetly chirpy woodwinds in the Finale that brought Wagner’s ‘Forest Murmurs’ (Siegfried) readily to mind. Yet, in the end, somehow it all felt too easy.

The awkwardness in Bruckner’s music is, in fact, what makes it sublime. Its repetitions, odd silences, and surprising juxtapositions pose interpretive challenges but are essential, nonetheless. Barenboim glided elegantly through the Trio of the Scherzo, for instance. It was expressive, yes, but ultimately lacking in tenderness and vulnerability. Even if Bruckner had not personally applied the subtitle ‘Romantic’ to this work, it is still romantic music; all too often, Barenboim provided little more than Biedermeier prettiness.