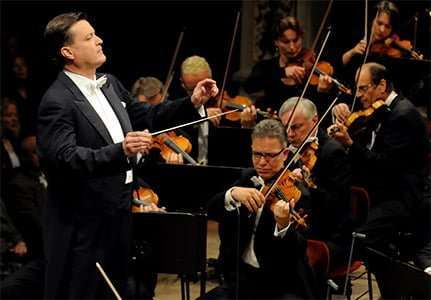 According to Bruckner scholar Julian Horton, during the Nazi regime the composer’s music served as a propagandistic symbol of “nationalistic movements opposing the liberal Viennese establishment.” Its message of a simple faith in divine redemption was deliberately distorted to represent the German Volkgeist and nationalistic mysticism “at odds with the ‘heroic’ Beethovenian symphonic model.” Robert Haas’s edition of Bruckner’s Eighth Symphony became entangled with political motivations, which he freely admitted supported these Nazi’s manipulations. Haas claimed that his edition of the score “purified” the work by, among other things, restoring extensive passages deleted by Bruckner under the undue influence of Hermann Levi and Josef Schalk. Haas’s version became less-often performed than the edition by Leopold Nowak published by the International Bruckner Society in 1955. Nowak worked from the 1890 version that included the cuts Haas restored in his edition.

Some Bruckner experts, such as William Carragan, have long advocated freeing Bruckner scores from the stain of Nazi ideology. Staatskapelle Dresden’s principal conductor Christian Thielemann favors Haas’s edition, here giving it a performance that seemed to recall the era that produced it. Yet if his intention was to treat the towering aspects of the symphony as its essence, any success he might have had in doing so was mitigated by his rigid, constrained treatment of much of the work. Heavy-handed tempos sapped it of much needed tension and smoothed-over lyricism drained every ounce of its expressive beauty. Except for some effort to produce strong climaxes (which sometimes backfired, as in the Adagio), the performance was for the most part bland and devoid of the music’s brilliant fusion of overwhelming dramatic import and expression of devout faith. Even the orchestra, one of Europe’s oldest and finest, did not seem up to par. Most disappointing was the rather tarnished sound of the brass and the strangely impeded string tone – except for the cellos, which came through splendidly. Overall, one sensed too much restraint and a ragged edge in tutti passages. Only during softer strains, particularly in the Adagio, did the orchestra exude a sense of either warmth or blissful repose.

From the outset, the dramatic nature of the symphony was undermined by treating the foreboding opening bass figure (which serves as a motto during the entire work) so smoothly and without an incisive edge as to make it sound trite and devoid of mystery. Thielemann’s foursquare pacing froze the music in its tracks, draining it of any sense of character and passion. Long approaches to peaks that can be shattering when the tension is gradually increased were treated in a segmented rather than in an over-arching manner, causing the highpoint to emerge suddenly rather than inevitably. When Thielemann pressed forward to elicit greater impulse during such passages, the result was over-wrought and disjointed. The scherzo suffered from stultifying rigidity, as if to make an emphatic statement with ideological overtones, alleviated only by the violins’ graceful lyricism during the trio.

The Adagio (using Haas’s longer text) began promisingly, with a soft, tender violin theme lifted gently by accompanying syncopated rhythms, but as the theme developed Thielemann held back, lingering over phrases and eroding underlying tension. The heaven-storming climax came across as a rather middling experience. In the finale, the blazing opening section was relatively tame, and the lyrical second theme forced and icy cold. Thielemann sometimes hurried to imbue the music with greater urgency, but instead gave it a hard edge. As in the Adagio, climaxes were confined when they should have emerged with overwhelming splendor. During the coda, Thielemann maintained a steady, broad pace that wended its way to a galloping conclusion, the last three notes thrust out with extreme emphasis, as if to make one last effort at communicating the conductor’s vision of the symphony’s significance. When it was over, Thielemann bowed his head as if in prayer before turning to the audience, which responded positively despite the performance’s many deficiencies.