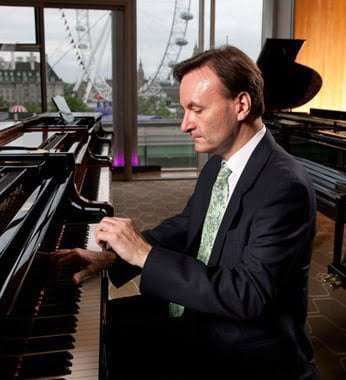 The austere, pragmatic way in which Stephen Hough engages with the piano is scant preparation for the degree of identification that defines his playing and which, for all his apparent cerebral control, marks him out as one of the masters of the romantic repertoire. Of course, musicians are merely the conduit of expression, but Hough shows the process at its most transparent and focused. No wonder he derives solace from his other outlets – his poetry, painting and Catholicism.

The first part of his Barbican Hall recital presented two works that are well known but in fact rarely programmed. In the case of Schubert’s D784 Sonata, it may be because the music takes no prisoners in its uncompromising bleakness, anticipating the disintegration of Winterreise. I wonder if I’ve heard the opening statement in bare octaves played with such blankness of tone, kept afloat by the nervous speed Hough adopted – readings of this movement range from funereal to hysterical. Hough is a master of veiled tone, which he applied to the gentler second theme, as though heard though a glass darkly. It was a pity that he passed on the first-movement exposition repeat – as unthinkable here as, say, in the ‘Unfinished’ Symphony – if only because his playing had been so spot-on; even so, he had prepared the ground for its extremes of contrast, symphonic weight and rhythmic tautness. The disquiet that he threaded into Andante transformed into spectral restlessness for the Finale, with carefully graded dynamics sustaining this Sonata’s inscrutability to the end.

Five or six decades ago, César Franck’s Prélude, Choral et Fugue used to be a recital mainstay, but, like the composer himself, has fallen out of fashion. Compared to the unmannered honesty of Schubert, the best of Franck’s music revolves around a lofty anxiety, nourished by protein-rich chromaticism. Rather than trying to reach out to the back of the Hall, Hough’s concentration on separation of line and supple rhythms drew the audience into some ravishingly played detail – his touch feathering over the crossed-hands passages in the ‘Choral’ was beyond delicate – and the closing pages of the ‘Fugue’ showed off the sheer splendour of his virtuosity.

Hough’s own Sonata III ‘Trinitas’ was commissioned by the liberal Catholic weekly The Tablet (to which Hough is a regular contributor) to mark its 175th-anniversary. In his introductory note, Hough the composer drew parallels between the dogma of serialism (the technique he drew on in this Sonata) and the dogma of the Trinity in Catholic teaching. It starts with a burst of Second Viennese-style rigour but soon becomes more overtly harmonic, before launching into a sensational, virtuosic jazz section. Waiting in the wings is a famous hymn-tune ‘Holy, Holy, Holy’ that emerges fully defined in the third section and which dissolves into a transfigured return to the note row. The piano-writing seems to sit under the hands, and the music’s development was disarmingly clear.

It flowed naturally into the Liszt group, the two Valses oubliées were masterclasses in tonal control and febrile energy, ‘Harmonies du soir’ marking Hough out as one of the great Liszt pianists in his stupendous overview of its epic spirituality, and the F-minor Transcendental Study, oddly untitled, given an electrifying sense of narrative on the back of thrilling virtuosity.

There was more (quieter) Liszt in Hough’s first encore, the Consolation No.3, before this great artist lightened the tone with his arrangement of ‘Kitri’s Variation’ from Minkus’s ballet music for Don Quixote and then Eric Coates’s By the Sleepy Lagoon, the signature-tune of BBC Radio 4’s Desert Island Discs.