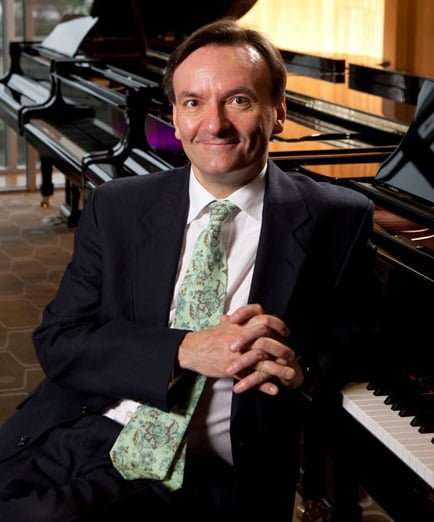 Stephen Hough’s passions are wide-ranging – poet, theologian, painter, composer, much hit-on Telegraph blogger, all enlarged by his genius as world-class re-creative artist. The pianist who can project Chopin at his most patrician or Debussy at his most impressionistic is also a great communicator. Hough’s recital embraced Debussy’s visual immediacy and evanescent textures as well as Chopin’s enigmatic formalism, drawing us into two very different approaches to music united by the same medium, the piano.

Hough’s opening piece, Debussy’s La plus que lente, almost casually declared his technical and interpretative prodigality – a spontaneity deriving from a fellow composer’s empathy, the painterly way he lays down colour and lights up harmony, the tactile jazz-style directness of a pianist who seems to talk via his hands. These were all aspects he took much further in the three Estampes (Sketches), in which Hough’s visual grading of touch lightly evoked long oriental vistas in ‘Pagodas’ with backgrounds subtly adjusting our viewpoint, and he veiled the warm evening in Granada with a parade of hallucinatory Spanish-dance rhythms in playing of faultless precision and atmosphere.

Hough’s qualities showed an even higher profile in his progress through Chopin’s Four Ballades. Chopin’s ability to endow the most transitory decorative passage with a sense of structure gives his music its volatile but tensile strength, from a cryptic Study to these intensely expressive, emotionally coherent masterpieces.

Like Chopin, Hough was at the top of his game here, finding new colours and styles of attack from his beautifully voiced Yamaha. The guileless opening of No.2 (which he played first) gave an idea of the eloquence and significance of poetic rubato and pauses that subtly directed the music’s flow. The ease with which Hough ‘explained’ the music’s contrasts worked to majestic effect in the No.1, with its overtly Byronic narrative casting its spell. Hough’s crafty strengthening of purpose in the dramatic opening involved you immediately in music that moved confidently from one of Chopin’s grandest melodies to that strange, flickering waltz, which Hough made especially fragile. It was only after Hough’s stunning playing of the coda that you realised how completely he had served the work, with a profound understanding of Chopin’s huge expressive range.

There is also a very attractive way in which Hough measured himself out as observer and as protagonist. This became noticeable in the Third Ballade, the most forthright of the set, which he steered towards a more rhapsodic lyricism and, almost incidentally, drew attention to his wonderful pedalling, as potent an expressive means as his fingers. Hough’s neutral opening in the final Ballade left you unprepared for the blistering excitement of what was to follow, performed with a consummate identification with the way Chopin’s material evolves to become the structure.

Although Hough is no slouch when it comes to barnstorming, there were no grandstanding mannerisms, his sense of rubato was a support of infinitely graded flexibility, and it was clear that Hough has bought into the Ancient Greek concept of power through restraint. It was also clear that his epic sweep came on the back of scrupulous attention to detail and, of course, on his magisterial virtuosity – the memory of his left-hand motoring through Chopin’s colossal demands still makes me go weak at the knees.

This was Chopin-playing at the highest level, and it was a wrench to readjust to the smaller if sharply characterised world of Debussy’s Children’s Corner or to appreciate fully the dazzling and ecstatic energy of L’Isle joyeuse. Hough the entertainer reasserted himself in the first of two encores, his arrangement of ‘Dulcinea Variation’ from Minkus’s ballet music for Don Quixote, then his own piece, Osmanthus Romp, and we were gently let go – wiser, invigorated – by the ‘Nocturne’ from Grieg’s Opus 54 set of Lyric Pieces.