Anyone Can Whistle
Music and lyrics by Stephen Sondheim, book by Arthur Laurents 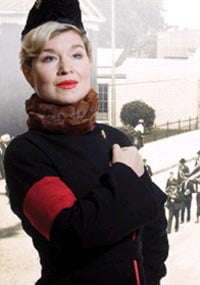 When Stephen Sondheim’s “Anyone Can Whistle” went on the road to Philadelphia in 1964, it was slaughtered by the critics and audiences left in droves. It then opened on Broadway where it lasted for just twelve previews and nine performances. Since then it has received occasional concert performances in the US, in Canada and in Britain. It was first staged in the UK at the Everyman Theatre in Cheltenham in 1986 for just 22 performances. It was revived in 2003 in Los Angeles and at the Bridewell, a small fringe venue off London’s Fleet Street.

Only now, at Jermyn Street Theatre, is it receiving its first-ever extended West End London run. Jermyn Street has a reputation for making things work, especially when they are by Sondheim. Last year it presented the West End premiere of “Saturday Night”, Sondheim’s first professional work in the theatre, but one that never reached the stage because the producer died. The Bridewell had also already mounted and recorded “Saturday Night” in 1998, but the Jermyn Street version was such a success that it then transferred to the Arts Theatre and the Theatre Royal, Windsor. Now Primavera is hoping for the same sort of success at Jermyn Street with “Anyone Can Whistle”. Marking Sondheim’s eightieth birthday on 22 March it is presenting “Anyone Can Whistle” for no less than forty performances. Incidentally, there will be a new American staging of the show at New York’s City Center from April 8 to 11 this year.

Despite its rare appearances, “Anyone Can Whistle” has assumed cult status, which is really saying something even for Sondheim fanatics. It was first announced in 1961 but didn’t open until three years later. It came from an idea by Arthur Laurents. At first the show was called “The Natives Are Restless”, then it became known as “Side Show” before finally assuming the title “Anyone Can Whistle”. The project began badly as there was trouble raising the money. When Angela Lansbury was approached to appear in it, she was flummoxed by its plot, but thought it had something worth pursuing and wanted to work with Sondheim and Laurents on what was to be her first stage musical, the first of many. However, it was not plain sailing because “Anyone Can Whistle” seemed doomed from the outset.

Lansbury’s part was Cora Hooper, the corrupt Mayor of a hick American town that has trouble encouraging visitors to enjoy its local amenities. A World’s Fair and a Peer Gynt festival didn’t work, so she sets up a plan to invent a miracle in which water spouts from a rock. This does the trick and visitors pour in, including members from the local mental institution, ‘Dr Detmold’s Cookie Jar for the Socially Pressured’, run by Nurse Fay Apple (the part originally played by Lee Remick). She takes her ‘cookies’ to see the so-called ‘miracle’ where they mix with the allegedly sane visitors until nobody can tell who’s mad and who isn’t. Along comes one Dr J. Bowden Hapgood (Harry Guardino originally) who is able to work out who is who. Nurse Apple falls in love with him until she finds that he’s as mad as any of her patients, albeit he’s also an idealist who wants to retire from doing acts of heroism.

The trouble with “Anyone Can Whistle” was that it was experimental and political and Broadway has never been happy with either of those elements, at least not in its musicals. Although it has moments of outright farce, basically “Anyone Can Whistle” is social satire dealing with the serious themes of freedom and oppression, of holding on and letting go, of giving in to love and commitment, themes that Sondheim subsequently went on to pursue in further detail in “Company”, “Follies”, “A Little Night Music” and even “Sweeney Todd”. If the plot of “Anyone Can Whistle” was way ahead of its time, then Sondheim’s score was not. In fact he looked back and wrote pastiche numbers from the sort of classic shows Broadway used to mount. The original-cast album was recorded immediately after the show closed and it is on account of that alone that “Anyone Can Whistle” became a cult show. Every true Sondheim admirer added it to his or her collection, merely because it was there, even if the show wasn’t, and because the songs kept turning up in various Sondheim compilations.

The first time you see the show the book is something of a disappointment, or at least it’s an effort to get your head around it. Sadly it may never have a totally successful book to accompany what is a really outstanding score, one of Sondheim’s best and for which for the first time he got to compose the sort of music he prefers to write, music that is truly romantic. He cites the title song of “Anyone Can Whistle” and ‘With So Little To Be Sure Of’ as examples of this, but the piece is as full of great songs as most Sondheim shows are. “Anyone Can Whistle” also has Cora’s big opening number ‘Me and My Town’ and later on its counterpart, ‘A Parade in Town’, Fay’s wistful ‘There Won’t be Trumpets’ (originally cut from the first production (madness!) but reinstated for Jermyn Street), the romantic duet ‘Come Play Wiz Me’ for Fay and Hapgood, and Hapgood’s ‘Everybody Says Don’t’, a song for people who need to try to do something – even if they fail in the attempt.

Tom Littler has removed his production away from America and set it somewhere in Europe in 1930 in a remote town where the cunning members of the Town Council wear uniforms with what look like Nazi-type symbols. Issy van Randwyck gives a star turn as the appalling but charismatic Mayor Cora Hooper who has to be in charge at all times. She is surrounded by her fawning trio of council members, the Comptroller (Alistair Robins), the Treasurer (Leo Andrew) and the Chief of Police (Karl Moffatt) who tap-dance their way into their Mayor’s heart at her every bidding. Nurse Fay Apple (Rosalie Craig) is the real heroine of the piece, who likes to have everything working according to plan, but is a dead loss at human relationships. Craig pulls out all the stops and makes Fay a fully rounded character in a piece that in general deals in a mordantly humorous way with stereotypes: corrupt Mayor, kowtowing Town Council, nutty mental patients. David Ricardo-Pearce’s J. Bowden Hapgood is the great unknown, the outsider who is not what he seems to be or indeed not what he is taken for, a loose cannon but one that has an enormous effect on those with whom he comes into contact, an enigmatic quality that the actor captures effortlessly.

The supporting cast do well as the townspeople and Cookie Jar inmates, and many of them also supply the musical accompaniment. Some of the singing is a little uneven but the show is staged by Littler and choreographer Alice Jackson with great élan, passion and pace, using the minuscule Jermyn Street space to full effect. If the original production was in dire straits from the outset, Primavera’s staging of “Anyone Can Whistle” proves that it is now in safe hands. You may never see a better production of it than this one.