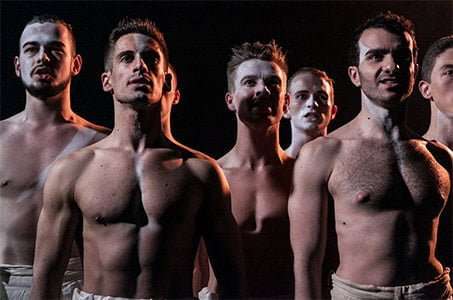 I cannot imagine anyone except Stephen Sondheim writing a show about the westernisation of Japan, as seen through Japanese eyes in 1853. In 1976 was New York ready for a kabuki-style ‘white-face’ staging with men playing the women’s parts, and with other figures dressed in black to make the set changes? When it premiered Pacific Overtures previewed in Boston, then played the Kennedy Center in Washington DC for a month before opening on Broadway where it ran for fewer than 200 performances. In spite of that it was nominated for numerous Tony Awards, but won only for Best Scenic Design and Best Costume Design, but hardly the most outstanding qualities in a piece that, both musically and lyrically, contains some of Sondheim’s most courageous and challenging work. It has since been revived in New York in 1984 and 2004, was premiered in the UK in Manchester in 1986 and the London premiere was staged by English National Opera in 1987. The 2001 Chicago Shakespeare production played London’s Donmar Theatre in 2003 and won an Olivier Award. The New National Theatre of Tokyo presented Pacific Overtures at New York City’s Lincoln Center and the Kennedy Centre in 2002. The Union Theatre’s production has ‘classic’ stamped all over it.

Stephen Sondheim wrote
His Pacific Overtures
With haiku in mind

Sondheim’s name has long guaranteed a theatre run, not necessarily a successful one, but at least something original. He could not have been any more so than with Pacific Overtures. However, with a back-catalogue including (as composer and/or lyricist), West Side Story, Gypsy, A Funny Thing Happened on the Way to the Forum, Company, Follies and A Little Night Music, Sondheim had twenty years or more of magnificent work behind him. There were hiccups along the way: his first show, Saturday Night (1954), never reached the stage then, as the producer died. Anyone Can Whistle (1964) ran a mere thirteen performances, with Lee Remick and Angela Lansbury yet! Do I Hear a Waltz? (1965) was a modest success, but it was a collaboration that nobody wanted to do, least of all composer Richard Rodgers.

Claiming less is more,
That God is in the details,
Content dictates form 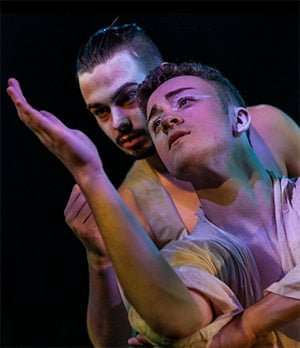 In Pacific Overtures, Sondheim, while inventing pseudo-oriental music, also pares down his lyrics, almost like pidgin Japanese, when compared to the more florid language of the encroaching Americans and Europeans. History is seen from the viewpoint of the Japanese who for centuries survived without recourse to the outside world.

Western warships face
An isolated Nippon
With the US dream

As the outsiders under Commodore Perry begin to encroach upon the empire, a samurai, Kayama, is appointed to repel the invaders but they are not considered a serious threat. Kayama employs Manjiro, returned to Japan from the US, to approach the Commodore but is rejected as Perry will only see the Shogun who subsequently dies at the hand of his own mother. Having left Japan in relative peace, the Americans return demanding trade agreements. In beautifully managed musical parodies of Americana (dancing to a Sousa march), the British (heralded by a G&S-style patter song), a Dutch clog dancer, a miserable be-furred Russian (“Don’t touch the coat!”) and a high-kicking French fop (“A détente! Oui détente / Zat’s ze only thing we want!”), the inevitable happens and eventually the Japanese emperor comes round to modernisation. As one of the songs emphasises, ‘There is no other way’.

Nippon needs to change
For it’s innovate or die,
Welcome to Japan!

The Broadway staging was given a big production when, as we know, others of his pieces can work equally well as chamber presentations – as the Union Theatre has successfully shown. Pacific Overture works extremely well in a confined space. Movement is the key element in Michael Strassen’s direction of the actors and his staging of the choreography. The Japanese rituals are observed but without slavishly resorting to the kabuki or butoh forms of dance theatre. Jean Gray’s simple designs and Tim Deiling’s brilliant lighting aid the piece immeasurably.

Both staging and acting are elegance personified by the male cast, while the choreography provides much emotional charge. It seems as if an ancient ritual is taking place before our eyes. Strassen has assembled an exceptionally gifted troupe. It is invidious to single out performers; however, Ken Christiansen as the Reciter, expounding changes in Japanese history, is an immensely commanding figure. Oli Reynolds as Kayama and Emanuel Alba as Manjiro are both sympathetic and affecting, while Marc Lee Joseph – as the Shogun’s Mother and the French Admiral – is a real live wire. Ian Mowat’s Madam (and other roles) is a perfect foil for some lugubrious humour. Lee Van Geleen as the Russian Admiral shows enormous versatility – but the entire company is in great voice and move likes birds on the wing.

For Pacific Overtures, Sondheim wrote some time-honoured songs, including the ferocious ‘Four black dragons’, the ironic ‘Chrysanthemum tea’, the instructive ‘Welcome to Kanagawa’ sung by the Madam and her geishas, the hilarious ‘Please hello’, for all the Admirals, the suggestive ‘Pretty lady’ and, Sondheim’s favourite, ‘Someone in a tree’. The musical accompaniment on cello, reeds, percussion and keyboard is eerily evocative under Richard Bates. The Union Theatre’s staging is now surely the best of London’s three.

ENO’s show was fine,
The Donmar’s even better,
Union’s the tops.