Sondheim
Sweeney Todd: The Demon Barber of Fleet Street, a musical thriller with music & lyrics by Stephen Sondheim, book by Hugh Wheeler, based on an adaptation by Christopher Bond 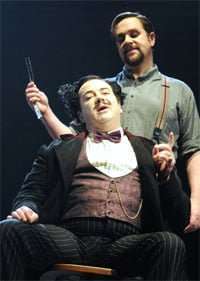 The latest production of Stephen Sondheim’s Sweeney Todd, a transfer to London’s West End following a sell-out season at Chichester Festival Theatre last year, opened in the week the composer-lyricist celebrated his 82nd-birthday. Although Harold Prince’s original Broadway and London productions (1979-80) lost money, Sondheim’s musical thriller about the notorious serial-killing barber has progressed from being an initial flop to classic status without ever passing through success.

The show has been staged in so many different ways. However, with the latest transfer from Chichester, the West End has only its second, large-scale production since Drury Lane in 1980 – if you discount the National Theatre and Trafalgar Studios stagings (studio and fringe, respectively) and the production at the Royal Opera House, which was more an opera than a musical. There was also a semi-staged concert version with Bryn Terfel and Maria Friedman at the Royal Festival Hall.

Sweeney Todd can work as either a huge Broadway monster or a small chamber production; it has been staged virtually everywhere. At the Adelphi, Sweeney Todd has finally come home to the West End, and barely a stone’s throw from the Fleet Street in which it is set. I have seen the show in umpteen places but this is the first time that it has enjoyed enormous whoops of joy and an instant standing ovation. Sondheim may have been before his time but his audiences have certainly caught up with him. 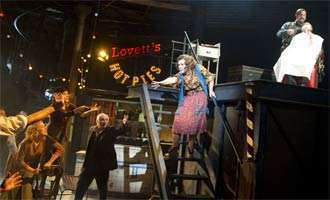 Jonathan Kent’s production updates the action from Victorian times to the 1930s, for no particularly discernible reason but it works nonetheless. Just as in Queen Victoria’s day the poor were also a huge problem in the 1930s and through successive governments are still with us. And we have our own serial killers. This is a grisly tale of a wronged barber trying to wreak his revenge on Judge Turpin, the man who stole his wife Lucy and daughter Johanna and put him away on a trumped-up charge: on returning to London, Todd meets an unscrupulous pie-maker willing to supplement her meat supplies with human flesh. This might seem a frightful case of over-the-top Grand Guignol but from Sondheim and Hugh Wheeler the melodrama is leavened with a great deal of gallows humour. One minute Todd is thinking about slitting his customers’ throats but in the next Mrs Lovett is singing about how to deal with the bodies in a light-hearted way: “And we have shepherd’s pie peppered / With actual shepherd on top.” This juxtaposition of horror and comedy tempers the darker side of the story and defuses the horror.

Another outstanding part of Sondheim’s score is his providing a beautifully lyrical song to accompany Todd’s most fiendish acts. When at last he has the Judge in his barber’s chair and prepares to give him the closest shave of his life, he sings about ‘Pretty women’, thinking of his lost wife and daughter. When Mrs Lovett’s business thrives she has plans for her and Todd to get a guest house on the coast. In ‘By the sea’ she sings of all the nice things they could do together but again tempering them with reality.

The orchestrations by Jonathan Tunick cope with the lightest of ballads to the profound darkness of Todd’s evil doings. The use of factory whistles and a harmonium is frighteningly realistic in moments of horror. The piercing nature of the music is enough to knock the audience into paralysis. The same could be said of Michael Ball as Sweeney. Looking nothing like the blond curly-headed, dimple-cheeked soldier he played in Sondheim’s Passion, here he takes on a deeper, unsmiling, threatening persona that certainly seems to scare the bejesus out of everybody. It’s a great performance and one that most people probably never thought he had in him. Looking more like Ricky Gervais than anything else he dominates the stage with a powerful reading of the role but without really ever losing our sympathy.

Imelda Staunton is born to the scheming Mrs Lovett. She knows the whereabouts of Todd’s missing family but keeps the information from him so that she can feather her own nest. On the outside she is a loving mother figure who can take in young Tobias after Sweeney has dealt with his employer, but, when she discovers that Tobias has found out about the contents of her pies, she has no scruples about dealing with him. She is also flighty and kittenish when trying to make up to Todd. Again this mixture of humour and evil is conveyed without our loss of admiration for her.

The excellent cast – John Bowe as Judge Turpin, Peter Polycarpou as Beadle Bamford, Robert Burt as Pirelli, Luke Brady as Anthony, Lucy May Barker as Johanna, and a very fine company – are all extremely good and the whole production runs smoothly under Jonathan Kent’s direction. I doubt if we shall see a better production of Sweeney Todd for a long time.