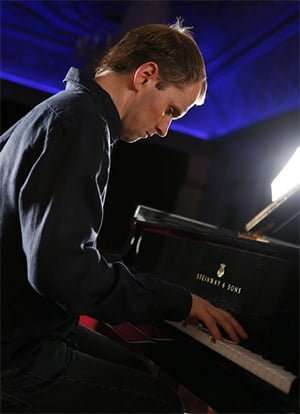 Christian art is full of images of the infant Christ, worked in with elements from the end of his life, such as the Instruments of the Passion or a serendipitous casting of a cross-shaped shadow. But few are so thoroughly mystical and personal as Messiaen’s Vingt Regards, his two-and-a-quarter-hour cycle regarding the babe in a manger that he composed during the German occupation of Paris towards the end of the Second World War.

For all the breadth of Steven Osborne’s repertoire, French music suits him particularly well, and his fans have good reason to consider Vingt Regards (hard adequately to translate – meditations on, contemplations of, aspects of, gaze of) as something of a signature work, based on his superlative Hyperion recording (now more than a decade old) and recitals.

With disarming clarity, Osborne goes hand-in-hand with Messiaen’s equally clear and schematic compositional methods – the crystalline rhythms (some of them very jazzy), brilliantly realised birdsong, those familiar, easily lampooned, stalking, lower-register themes, harmonies both highly coloured and unconventionally functional – but, paradoxically, the result is a profound expression of mystery.

Roman Catholic imagery is hardly backward in coming forward – the results from the nineteenth-century onwards often in reprehensible taste – yet despite passages of flamboyantly sweet sentimentality and garish drama, Messiaen’s specifically religious music hardly ever loses its integrity. He lived out his Catholic faith in acts of astonishing, positive devotion – Vingt Regards has been compared with the Mysteries of the Rosary, although, even by Roman Catholic standards, a very long one – and he has made his visions stick with “those of all faiths and none”; the still, attentive audience in the QEH seemed to be willing Osborne on to deliver the powerful message and at times complex theology of Messiaen’s tapestry of motionless mantra and riotous celebration.

As the “Theme of God” in the opening ‘Regard du Père’ (Gaze of the Father) quietly expanded into Messiaen’s parallel universe, the scale of the work and of Osborne’s magisterial command became increasingly apparent. His technique peerlessly transcended the demands of dazzling virtuosity, variegation, timbre and sheer stamina in playing of self-effacing power and jewel-like perception. The rapt tenderness of ‘Regard de la Vierge’ (Gaze of the Virgin) caressed the image of the Holy Infant in a way that became almost visual – Jonathan Harvey (deeply influenced by Messiaen) achieved the same sort of medium crossover in his Madonna of Winter and Spring. Its quasi-oriental, holy stasis was blown away by the colossal eruption of power in the toccata-like ‘Par Lui tout a été fait’ (By Him everything was made), the nearest music comes to the Big Bang – I couldn’t believe that one person could generate such amplitude and weight of sound, or that there existed an instrument (a phenomenally rich-toned Steinway, as on the recording) that could deliver it.

Although Messiaen’s method is transparently sectional, Osborne gave us an illusion of events overlapping, progressing and retreating to create an enthralling narrative flow. The Turangalîla Symphony was on Messiaen’s horizon, and you get trailers of it in Vingt Regards, not only of the composer in jazzy, transports-de-joie mode, but also in some piano figurations anticipating his use of the ondes Martenot. Osborne was at his internalising best in ‘Le Baiser de l’Enfant-Jésus’ (The Kiss of the Infant Jesus), wrapping us in a holy glow that seemed a natural extension of Liszt in his ‘Bénédiction de Dieu dans la solitude’. The shade of Liszt (the Piano Sonata in B minor this time) made its presence felt more forcefully in the triumphant reincarnation of the “Theme of God” in the closing ‘Regard de l’Eglise d’amour’ (Gaze of the Church of Love), its massive rhetorical repetitions egged on by some magnificently over-the-top birdsong.

Osborne paced himself superbly, so that each piece (some quite short, the longest 15 minutes) complemented each other, but it was his commitment to the visceral spirituality of Messiaen’s vision that took your breath away. It was an extraordinary act of recreation.