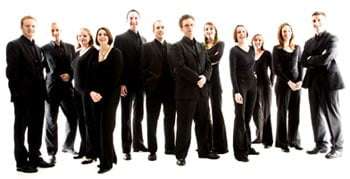 Setting a concert of polyphony from the golden age of Spain in Gloucester Cathedral was a touch of magic of which the wizards of Hogwarts would have been proud. Central to the programme which Stile Antico presented was the music of Tomás Luis de Victoria, not enough celebrated this year, the 400th-anniversary of his death. But part of the wizardry of this hour-long sequence was its construction, whereby movements from Victoria’s masses were interleaved with motets or chansons by other composers, passages from which Victoria had parodied, that is to say incorporated into his work, a practice commonplace in Renaissance time and having none of the negative connotations of plagiarism of later ages. It is inevitable that while some parodied passages are distinctive, their place in the new work audible and traceable, details of others are so quickly embedded into the new as to be much less easy to track, but the thread of connection is nevertheless palpable and gave an overall integrity to the performance.

It was the very considerable musical integrity of Stile Antico that made its members’ singing so satisfying. Their blend of sound was constantly varied according to the number of parts for which the texts were set, and indeed the number of separate choirs, with the placing of the singers helping to optimise the internal balance and overall clarity. In a way, the words of the opening motet by Victoria, O quam gloriosam, said it all: the essential purity of the performers’ sound – given added resonance in the wonderful acoustic – made for a simply glorious listening experience. After Morales’s motet Jubilate Deo had set in train the pattern of motet followed by a movement from a Victoria parody mass, it was Janequin’s chanson La guerre, which made the audience sit up. The composer’s evocation of the sounds of war were so cleverly realised, it was hard to believe that the piece was so old and that there was just four voices. The narrative was vivid and the pounding rhythmic energy came over as punchy as modern minimalism. When heard on its own, Victoria’s Missa pro victoria – wondrous as it is – risks seeming a piece where the composer had written it so as to pun his own name; here, the sense of battle between the voices, divided into two antiphonal choirs, came over strongly.

In Victoria, the pungent harmonic colour gives the music its particular vibrancy: Stile Antico was wonderfully attuned to those moments, so that the singers seemed at first to coalesce unassumingly and then explode with a little burst of passion, every vocalist listening and watching, reacting and responding each to the others. The result is totally compelling, with never a second when anything can be taken for granted, every note felt as acutely by the listener as it is by the singer. As it happens, this audience had been able to simultaneously feast its collective eyes on pictures by El Greco, projected onto a screen. The artist’s brilliant, almost modern-feel colours had a comparable vibrancy to the harmonic colour of Victoria. One small quibble: a row of fairy-lights was visible, looking ridiculous and detracting from the images and thus from this otherwise fascinating juxtaposition of two great masters. That said, in their final renditions, Stile Antico’s serenely radiant sound set the seal on a deeply satisfying recital.