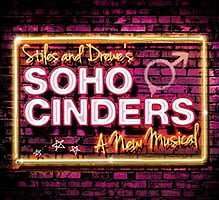 Though this is its first stage production, Soho Cinders had its gestation in 2000 when composers George Stiles and Anthony Drewe had just won the Olivier Award for Honk!. They decided to write a show set in London (“that wonderful city”), and make it a fable loosely based on Cinderella combining satirical fun with a catchy pop score. But other assignments, such as composing new songs for Mary Poppins and writing the award-winning Betty Blue Eyes, kept getting in the way. In 2010 Elliot Davis was recruited to collaborate with Drewe on the libretto and last year a concert version was given with great success at the Queen’s Theatre. Now the musical has been given its premiere aptly at the Soho Theatre, for the stage set is dominated by a street sign for Old Compton Street. The libretto, particularly for the show’s first Act, is one of the most exquisitely fashioned that I have encountered for a British musical. 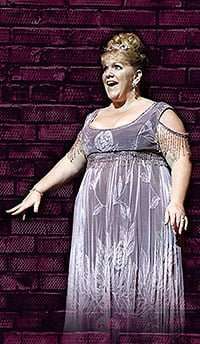 The heroine Velcro runs a laundrette in Soho and is in love with Robbie, a sweet young rent-boy (though he much prefers that he be called an ‘escort’). Robbie is about to be evicted by his wicked step-sisters (hilarious Suzie Chard and Beverly Rudd) though he is sure that a missing will made by his late mother will solve his problems, and he hopes that his titled client Lord Bellingham (distinguished Neil McCaul) will be able to trace it. Meanwhile the handsome Prince – James Prince, that is, convincingly portrayed by Michael Xavier – is campaigning to become Mayor, flanked by his loving wife Marilyn (splendid Jenna Russell) and his Machiavellian PR man William with ambitions of his own and an inability to resist making fun of his Sikh assistant. 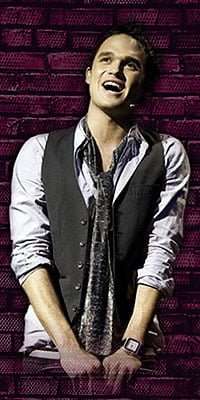 It transpires that Robbie and Prince are in love, and the first Act skilfully builds to the night of a gala sponsors’ party given by Bellingham which through various plot-turns is attended by both Robbie and Prince as well as the step-sisters. On Bellingham’s instructions, Robbie hires a tuxedo and, as he puts on the finery, the company encourage him with the rousing number ‘You shall go to the ball’, after which events build to a stunning curtain.

One could say that it is a hard Act to follow, for it is full of witty lines and lyrics, fascinating characters and intriguing plot developments. When Velcro learns that Prince, outwardly so ‘straight’, is Robbie‘s lover, she muses, “I must realign my Gaydar”. Robbie refers to Marilyn as “the leader of the opposition”, and William’s agenda for Prince, which includes moving from one television breakfast show to the next as he is interviewed on one gaudy sofa after another, prompts the comment, “I realise why DFS has a sale on every day of the year!”. The trenchant songs include a charming duet between Prince and Marilyn titled ‘Remember us’ as they recall their idealistic young days at university, and another duet, the step-sisters’ ‘I’m so over men’, as they imagine ways of subduing their craving for males. It is a showstopper and, as in many Cinderella-themed productions, it is the grotesque sisters who almost steal the show.

If Act Two never quite captures the momentum or hilarity of the first, it skilfully ties up all the plot, and gives greater exposure to performers like Russell and Carey. Tom Milner, making his professional theatre debut, has a powerful solo, ‘They don’t make glass slippers’. The show has a narration – the voice is that of Stephen Fry, and his droll delivery gets a lot of laughs. Lennox is the show’s anchor, and it is satisfying that she is given a hopeful, perhaps happy, future at the climax of this exhilarating and pleasurable production.