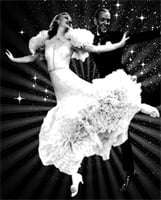 An evening of music by Gershwin danced by English National Ballet with special guest artists? Yes, bring it on, but why has nobody thought of doing it before? Since “Strictly Ballroom” hit our cinema screens sixteen years ago there has been a gradual revival of interest in popular dance-forms, culminating in the current mania for dance-shows on television, be they on the ice or off it. Riding-in on the crest of this wave of nostalgia comes “Strictly Gershwin”, Derek Deane’s brilliant tribute to the music and lyrics of one of the greatest song-writing partnerships of the twentieth-century (or any century come to that). There has been at least one ballet to the music of George Gershwin, in 1970 when George Balanchine created “Who Cares?” a world-wide favourite and in the repertoire of English National Ballet since 1996. It is enjoyed by everyone; after all, what is there not to like?

When George and Ira Gershwin were writing their popular musical comedies in the 1920s and ’30s for Broadway and Hollywood, their songs were intended to be danced-to. Dance was an essential part of any musical show of that era and, with artists such as Fred and Adele Astaire and Ginger Rogers, nobody performed them better. The figures of Fred and Ginger loom large in Derek Deane’s Gershwin show. Most of their films were then in black and white, so the production has a chic monochrome appearance which is enhanced by the sumptuous costume designs of Roberta Guidi di Bagno which evoke a long-gone era of films with daffy plots but with the most memorable scores of the day. To complete the nostalgic evocation and because the Arena presentation in the Royal Albert Hall leaves no room for scenery, there are big-screen blow-ups of famous faces of the day such as Joan Crawford, Marlene Dietrich, Mae West, Humphrey Bogart and Clark Gable. 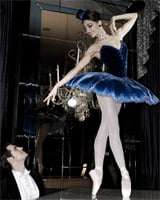 The show is divided into two parts, ‘Gershwin on Broadway’ and ‘Gershwin in Hollywood’. It begins with a general dance class for the entire company to a medley including ‘I’ll build a stairway to Paradise’, ‘Let’s call the whole thing off’ ‘Bess, you is my woman now’ and ‘Embraceable you’. This sets off the evening with a bang and from the first notes you know that everything is going to be fine. And when even the conductor starts dancing on his podium, you realise it is going to be a great evening.

The variation in dance is well managed and for most of the show it is jazz or popular ballet and ballroom dance; classical only comes at the end. There is a mixture of pas de deux such as ‘The man I love’ danced by Thomas Edur and Agnes Oaks, and ‘Summertime’ with Daria Klimenová and Friedemann Vogel, but for the most part the whole company is involved. The most popular response comes from a duo of tap-dancers, Paul Robinson and Douglas Mills in ‘Fascinatin’ rhythm’ and ‘Strike up the band’, the latter engaging everybody in a great salute to the ‘US of A’ complete with a battalion of tap-dancing soldiers dressed in red, white and blue. For ‘It ain’t necessarily so’ and ‘Someone to watch over me’ it is ballroom champions Lilia Kopylova and Darren Bennett from the BBC’s “Strictly Come Dancing” who bring these songs to life.

Some pieces are danced just to the orchestra while others are accompanied by vocals from the Maida Vale Singers or Barbara Cook. She is in her element here; the Gershwins have long been part of her repertoire. At age 80 she shows no sign of vocal ageing. Her young, fresh, clear voice is just perfect for the four numbers she contributes. In ‘I’ve got a crush on you’ she opens her heart to real emotions, and in ‘But not for me’ she assumes an almost tragic air of wistfulness, singing of the regret she feels for being left out of love. In ‘Someone to watch over me’ she reveals vulnerability and means every word, while ‘A foggy day’ brings eventual happiness as she celebrates the lifting of an emotional cloud. Each song is perfectly modulated and becomes truly meaningful through the passion that Barbara Cook lends to her every performance. 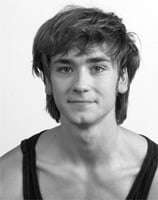 There’s also a brilliant tribute to Fred and Ginger in ‘Who cares?’ and each half ends with a big finish, the first for ‘An American in Paris’, written in 1928 as a symphonic piece and later used in the 1951 film with Gene Kelly and Leslie Caron. In Derek Deane’s virtual staging we get the two lovers (Tamara Rojo and Guillaume Côté) plus the soldiers, the nuns, the nurses with baby carriages, the onion sellers, the girls with flower baskets, the four strange harpies in red chiffon and even a messenger-boy riding through on his bicycle – and lots of dry ice. It is utterly charming and a fitting tribute.

The actual finale is a performance of Rhapsody in Blue (piano solo by the excellent Jonathan Scott) for which Deane has choreographed a classical piece reminiscent of the heyday of George Balanchine. It brings the house down. There’s a definite magic about the music and lyrics of George and Ira Gershwin that no other songwriters have replicated. George died in 1937 aged 38 – they had a prodigious output even so. Who knows what might have been had George lived as long as his brother did (Ira died in 1983). At least we can celebrate their musical legacy – which is exactly what “Strictly Gershwin” does.