Mendelssohn
Violin Concerto in E minor, Op.64 [1844 version]
Bruckner
Symphony No.9 in D minor [International Bruckner-Gesellschaft Edition, edited by Benjamin-Gunnar Cohrs (2001), with the Finale in the completed performing version by Samale, Phillips, Cohrs, Mazzuca, in the new revised edition by Samale and Cohrs (2007)]

Mendelssohn’s Violin Concerto was superbly and touchingly performed by Daniel Hope. One could only wonder why Mendelssohn had thought it necessary to revise it – a question not unfamiliar to Brucknerians. Hope played an encore, his own arrangement of of Ravel’s “Kaddish”; the following night his encore was the slow movement from Erwin Schulhoff’s Sonata. Both spoke with a profound melancholy that provided a fitting transition towards the D minor Symphony to come. 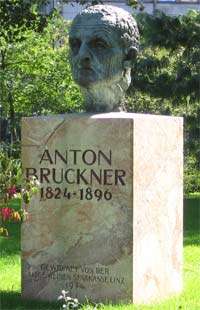 Bruckner was 62 when he embarked upon his Ninth Symphony, just two days after he had completed the Eighth, in its first version. But his decision to revise many of his earlier works, and the composition of “Psalm 150”, “Das deutsche Lied” and “Helgoland”, meant that he was over 70 by the time he had completed the first three movements of the symphony, and very ill with an attack of pleurisy that nearly killed him. The Last Rites were read – but after six months bedridden he recovered and started the composition of the finale in May 1895. He was able to work on it for just over a year before falling ill with severe pneumonia in summer 1896. He died in October.

Daniel Harding is a young family man, a 21st-century conductor of roughly half the age that Bruckner was when writing his Ninth. What could he know about how to present this last testament of a solitary old Upper-Austrian composer facing death in Vienna at the end of the 19th century? On the evidence of these two magnificent performances it appears that he understands that the way to do it is to trust, rather than impose on, the score; that what is written is there to be heard, and hence orchestral clarity is essential; that the dying composer’s mighty and unsettling message, this “blast from the past”, must be brought into the present to speak to our mortal future.

The desire for clarity was made visible and audible by the orchestral layout, with First and Second violins split to the left and right respectively, violas and cellos facing forward in wedges between them, the double basses at the back far right. Woodwind and horns were central behind the strings, the rest of the brass to the right, timpani to the left. Throughout, and especially in such heavily scored sections as the first movement Gesangsperiode, all the parts were audible and well-balanced. Indeed, I don’t think I have ever heard the opening First violin line of the Gesangsperiode sing so clearly in the contrapuntal texture. It was a heart-rending response to the cataclysmic octave fall that had preceded it.

The excellence of this orchestral layout was one thing, but it would have been to no avail were it not for the outstanding playing of the Swedish Radio Symphony Orchestra. Immediately from the opening string tremolo, and then in the melodic fragments that form the crescendo to the fff unison statement of the main theme, you sensed the alertness and commitment of these musicians. There was to be nothing routine here, something very special was taking place. The accuracy and urgency of articulation of the orchestra’s playing communicated with trenchant immediacy. But even more amazing, after over 80 minutes of impassioned playing, they were still exhibiting the same concentration and intensity. (So it was hardly surprising that on the repeat, and broadcast, performance the brass in particular showed signs of tiring come the Adagio and the finale, and even Harding’s grip seemed to loosen slightly during the latter stages of this second performance.) 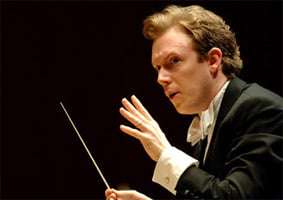 The first movement was impeccably presented, powerful, impassioned, but free of sentimental distortion, and its relentless forward motion was such that it allowed for no break before the scherzo but tumbled straight into it (as per the attacca direction in the score). This was a scherzo of unrivalled demonic power, the pizzicato dance for once accented in a correct 3/4, and the great thumping theme hammered out by the timpanist using wooden-headed sticks – and how ghostly they sounded when played piano! And, at last: a conductor who presents the trio up to speed with no indulgent sentimental relaxation that conductors have traditionally languished over at bar 53 (letter B), to the detriment of the spooky, slithery, spectral quality that is the essence of this music.

Harding similarly refused to relax into sentimentality in the Adagio, holding the relentless tension in the presentation of the tortured first theme, leaving the episodic and searching progress of the second theme group, Gesangsperiode, unmitigated. There was an immense and profound pause after the great dissonant fff climax – a deathly silence gripped the hall – and then the music continued unchanged, winding down to the long held chord on horns, tubas and trombones.

Harding held the tension from the Adagio’s final pizzicato into the pianissimo drum roll that opens the finale. Bruckner’s symphony now takes us into an extraordinary wasteland inhabited by hostile thunderbolts, pervaded by numbed, obsessive repetitions of the dotted rhythm (perfectly accented by the players) of the first two theme groups before the glorious chorale, the first trumpet shining out above the rest of the brass, the violins’ triplets skittering up and down frantically beneath. Slowly through its second part the finale gathered itself together, searching anxiously, it would seem, for some way out. Bruckner’s characteristic episodes lead to dead ends, progress knocked sideways by unforeseen intrusions. The wild and outrageous fugue was heard in this performance as never before with frightening clarity and attack.

Finally, in this completion, the movement, and indeed the symphony, comes into focus in the coda in a cataclysmic overlay of themes from the previous movements, and in a second dissonant climax reminiscent of the Adagio (all this based in varying degrees upon manuscript sketches and contemporary reminiscence) – but this time, instead of the Adagio’s return to unchanged anxious music from near its beginning, the final pages assemble the ‘hymn of praise’ built on the “Te Deum”’s ostinato and ‘non confundar’ to present an act of faith: a glorious gift, a blessing from beyond.

Both performances were of the highest standard. Bruckner’s Ninth as a four-movement work in this completion could have had no finer advocacy than the Swedish Radio Symphony Orchestra and Daniel Harding. Bruckner’s finale to his Ninth Symphony has finally arrived.