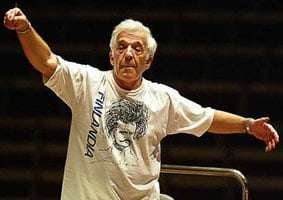 The current Festival comprises a survey of the composer’s major orchestral works including his three symphonies, Symphonic Dances, piano concertos 2, 3 and 4, Rhapsody on a Theme of Paganini, plus miscellaneous shorter pieces. This second concert included two early works, Caprice bohémien and the splendid Symphony No.1 in D minor. Coming central was Rachmaninov’s most popular creation: Piano Concerto No.2. I must confess that work is not a favourite of mine, but Cristina Ortiz’s interpretation was considered and lyrical, yet powerful, with ample virtuosity when needed; witness the near-flawless execution of the cadenza. Ashkenazy’s familiarity with the work, both as pianist and conductor, ensured a rich and sweeping orchestral response.

Regarding the Caprice, Rachmaninov – in 1930 – said about it that it was “the only one of my children I would prefer to disown”. The ‘very slow and lugubrious’ main body of the work, a funeral march, was just that. Ashkenazy and the orchestra did their best, with a sprightly & exciting final dance – more Cossack than Gypsy – but it was all too late!

The story of the disastrous premiere of Rachmaninov’s First Symphony, badly prepared and conducted by the hostile and possibly inebriated Alexander Glazunov and savagely criticised by César Cui, amongst others, is well-known. The composer’s subsequent breakdown and three-year creative hiatus and his belief that the manuscript was lost counted against the symphony: only after Rachmaninov’s death were the orchestral parts discovered in St Petersburg. It’s a wonderful work that demonstrates a striking economy of musical themes, allied to a wild Slavic pessimism, which, unlike the Capriccio, finds an entirely appropriate place here.

I have long-treasured Ashkenazy’s Decca recording of this work with the Concertgebouw Orchestra. Despite leaner-sounding strings, some obscure woodwind solos and an embarrassing restart to the third movement Larghetto, when the Principal Clarinettist struggled with a dropped mouthpiece, the orchestra measured up fully to Ashkenazy’s passionate demands, producing vivid and accurate playing, the rasping brass especially resplendent in the apocalyptic and overwhelming finale.

All good omens for the remainder of the Festival. The additional good news is that this concert was recorded for Octavia. Decca has released a 6-CD Souvenir Edition of Ashkenazy’s Rachmaninov recordings on 480 0197.