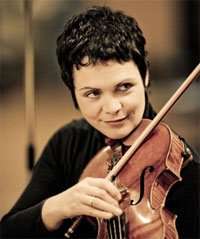 The quality of Mendelssohn’s later chamber music overshadows somewhat the merits of his earlier examples. These are prodigious works, written when the composer was in his mid-teens, and demonstrate assured writing for stringed instruments and his extremely confident grasp of form.The work for viola, written when he was fifteen, is in three substantial movements, weighted towards the finale, a ‘Theme and Variations’. In this BBC Radio 3 Lunchtime Concert, Tabea Zimmermann and Silke Avenhaus emphasised the links to Beethoven in the slow introduction, and were fleet-of-foot in the ensuing Allegro, whose development contains quick upward ascents in both instruments, brilliantly executed. Zimmermann also drew on the composer’s original thinking with the Trio of the Minuet by taking it at a slower pace, softly reflective but chromatic around the edges. The finale was colourful, with an air of mystery brought to the Eighth Variation that suggested Franck, while the tumbling piano figures of the Sixth were both virtuosic and highly musical. The extended coda is initially ruminative but then takes off at quite a speed, the players responding to these technical demands with considerable élan without excess of volume.As with Mendelssohn, Max Reger was heavily influenced by J. S. Bach, though went one step further by explicitly writing pieces for the same instrumental forces. However, although Bach’s solo cello works arrange naturally for the viola, as far as we know he did not write for the instrument in a solo capacity. Reger did. Zimmermann brought a beautiful lilt to the Adagio, its slight syncopation making an uneven, slightly unbalanced meter. It was the same in the third movement Vivace, whose bouncing rhythms fell easily under the bow. The secret to performing these works would seem to be melodic projection and phrase control, both qualities that Zimmermann exhibited throughout, together with a technical mastery of the tricky, multiple-stopped writing in the first movement.Zimmermann and Silke Avenhaus began with Schumann, and the versatile Adagio and Allegro. There was a pleasing sense of holding back in the quiet passages, both players observing the composer’s marking of ‘slow, with intimate expression’ to the letter, while the ‘swift and fiery’ Allegro was exactly that, Zimmermann’s energy and the flowing accompaniment of Avenhaus the perfect match.There was more Schumann as an encore, an arrangement for viola and piano of the third song from Opus 96, ‘Ihre Stimme’, which fell naturally under the fingers and exploited Zimmermann’s warm viola tone.