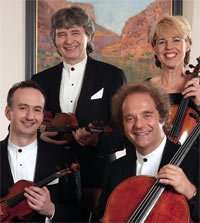 The Takács Quartet – formed in Budapest in 1975 – was a product of Hungary. Two founding members – Károly Schranz and András Fejér – remain. In its current formation the Takács Quartet is now international and its membership draws on two generations of musicians rather than one and takes a modern, Anglo-Saxon cut in the playing of stalwarts of the repertoire – performance is fleeter and lighter than it used to be.

The chief beneficiary in this instance was Haydn, with an exemplary performance. Edward Dusinberre’s violin was alive with wit, impishness and insouciance – qualities intrinsic to Haydn’s music, but often absent from performance. Dusinberre’s colleagues responded in kind – especially during the Andante variations, where, even-handedly, Haydn gave each instrument a high spot. In a delicious, unheralded moment, the viola (often considered ‘neglected’) brought the movement to a grave, quiet conclusion. The speeds of the following two movements were rapid and stylish, polished and suave – with a delectable detachment and poise.

I expected the Bartók to terrify, to cast an enchanted moonlit spell and to stamp peasant rhythm and melody in the village square. It did. This is an ordered work, with two very fast, abrasive outer movements enclosing two slower, more enraptured ones, leaving a fast, bucolic ‘alla bulgarese’ at its heart. The last movement, fastest of all, throws in late a “sardonic, nursery rhyme disfiguration” of the main theme before hurtling towards the unison B flat emphasised in the first movement. This performance was attention-demanding, scurrying and cerebral – highly skilled and committed.

The Third Razumovsky is a suave and genial affair and was played simply and open-heartedly – straightforward exuberance and, in its cerebral simplicity, suggestive that Beethoven was still writing works that could be termed ‘Haydnesque’. (Other groups have found that Beethoven had progressed rather further into discovering the impassioned quirkiness of his own character by 1805-6, his mid-30s.) You could argue, however, that lighting upon an uncomplicated, tuneful, easily-enjoyable Beethoven was a discovery indeed. The performance certainly made for smooth listening.

The size of the Queen Elizabeth Hall worried me: it is too large and the resulting sound too remote for chamber music (unlike Wigmore Hall). That said, the QEH was packed – the Takács Quartet’s popularity certainly needs to be accommodated!