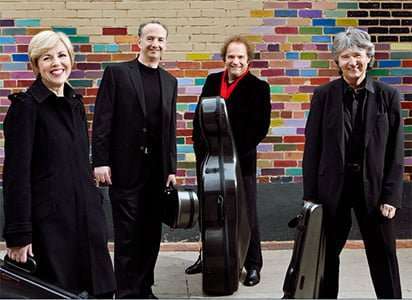 Bartók’s six string quartets, composed between 1908 and 1939, represent the fractured course of his life. Born in Transylvania in 1881, Bartók spent his final year in an apartment building in New York City on West 57th Street, just down the road from Carnegie Hall. His string-quartet cycle takes one through a journey from his early experimentation with ambiguous tonality, to his interest in irregular rhythmic patterns and Slavic folk melodies, to the pathos of his response to the start of World War Two.

The Takács Quartet, founded in Budapest in 1975 and in its present formation since 2005, presented the even-numbered works at this concert, the day after performing the odd-numbered ones, the latter not reviewed here. The players seemed to resonate with their shared Eastern European heritage, and their sublime musicianship and utter confidence in the repertoire shone through. Their ensemble was noteworthy in the thoughtful variations of balance between the instruments. They are quite a physical group. Seated in a nearly straight-line formation with their music stands low, they leant into each other as their parts diverged into various pieces of dialogue. Far from being distracting, they seemed to be functioning as various limbs of one organism, with all aspects of timing and phrasing coming from a central source.

The Second Quartet, 1917, begins lyrically. Edward Dusinberre created a warm sound that maintained its intensity even at a low volume. In the driving rhythms of the second movement, the musicians’ timbres became harsher, yet still keeping their rich density. The softer finale grew to a huge sound at its apex. The moment was fleeting, and the rest of the movement remained in highly gradated pianissimo dynamics. Károly Schranz occasionally allowed his tone to become much brighter than Dusinberre’s, making for an intriguing balance.

The Fourth Quartet, 1928, is the most blatantly expressive of the lot. At the start, the Takács players created a bitingly raw sound. While not outright ugly, the intensity was ramped up to a new level from what had come before. They had technical precision in the fast passagework of the second movement without losing the eerie atmosphere. Their glissandos had an easy confidence, as if they were added voices to a busy conversation. The slow third movement, which the composer considered the kernel of the work, had the upper voices create a concentrated quietness over which András Fejér played a pathos-infused lament. The next movement had the players playing pizzicato in tight unison, like a well-oiled machine. The alarms sounded in the finale, the symmetric equivalent to the opening movement, with the sound returning to forceful intensity.

The Sixth Quartet has each movement marked Mesto (sad). The first three feature a single instrument in the melancholy section before eclipsing into driving dance-like patterns, with only the finale retaining the mournful mood throughout. Geraldine Walther opened with aching affect. The dance-like section had brisk mood-swings, the emotional climate much more complex. The second movement began with Fejér playing the lament, and in the following section the heavy march patterns were highlighted. Dusinberre had the melody in the third movement. The fast section had the violinists lurching at each other in passionate discourse and in the finale their tonal palette had glimpses of the sweet warmth of the Second Quartet, yet tinged with a worldly nostalgia. Haunting tremolos segued into an ending of grieving sighs.