Mahler
Symphony No.8 in E flat 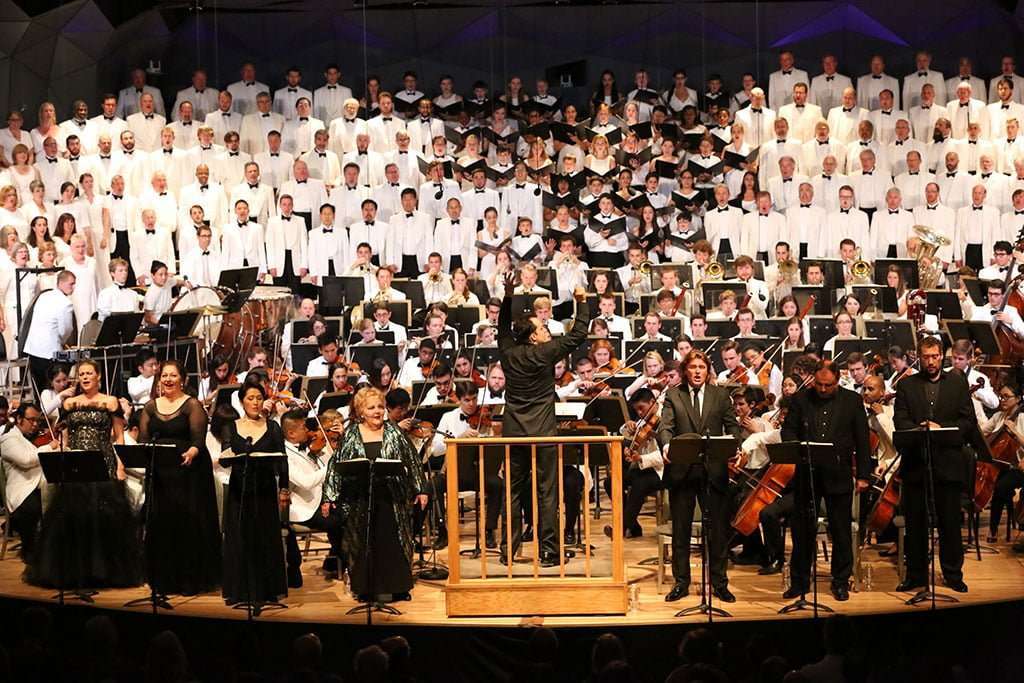 One could hardly imagine a more awesome work with which to celebrate the Tanglewood Music Center’s 75th-anniversary than Mahler’s monumental Eighth Symphony, known as ‘Symphony of a Thousand’, a tribute not only to Tanglewood but also to one of its greatest alumni, Leonard Bernstein. House seats and the surrounding landscape were packed with former students, teachers, and friends of the TMC. The atmosphere beforehand was charged with electric intensity.

Given the enormous forces (both vocal and instrumental) necessary for this sprawling and diverse Symphony, it is no wonder that performances are few and far between. Its eponym, ‘Symphony of a Thousand’ – referring to the alleged number of singers and players assembled for the premiere in Munich in 1910 – was appended by publisher Emil Gutmann, but Mahler never approved the subtitle. This Tanglewood presentation consisted of at least 350 musicians and included many Fellows of the Tanglewood Music Center.

Mahler’s Eighth is divided into two parts. The connection between them has both fascinated and puzzled commentators. Part I sets the text of an anonymous medieval Latin hymn, ‘Veni creator spiritus’, a fervent prayer for the renewal of creative power against the destructive forces that block inspiration. Mahler himself had suffered from such when composing his Seventh Symphony. Part II (more than twice as long) takes its text from the concluding scene of Goethe’s Faust. Here sublime Love provides the impetus with which to rekindle artistic endeavor. Structurally, Part II consists of twenty-nine variations on a theme that is only fully stated toward the end of the work (in the ‘Chorus Mysticus’). This concluding section provides one of the most awesome moments of magnificence in musical literature. 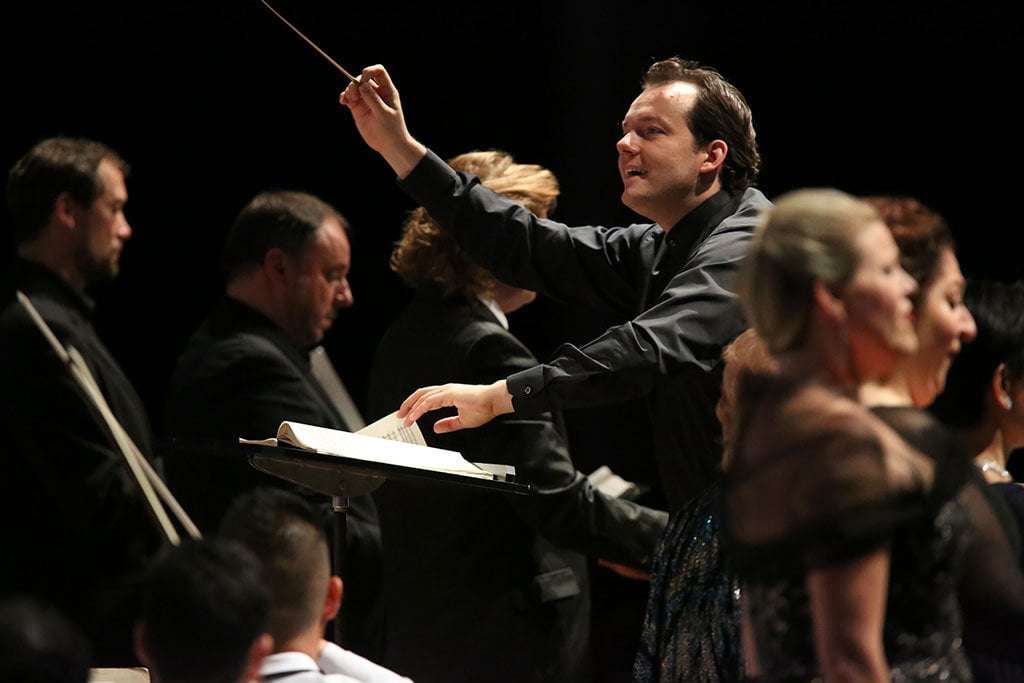 A fine cast of vocal soloists joined the enormous array of performers, flooding the stage. Although the solo singers did not always complement each other – some trying to upstage colleagues – each one was admirable. Especially impressive were Matthias Goerne as a dramatically forceful Pater Ecstaticus; Ain Anger, a stalwart and deep-throated Pater Profundus; and Erin Wall, who managed to negotiate the high tessitura admirably. Christine Goerke seemed to have difficulty above the stave, but her professionalism and power of delivery won through. Erin Morley sang Mater Gloriosa softly and tenderly from a height on stage-left. Klaus Florian Vogt, looking more like Lohengrin than Doctor Marianus, sang well for the most part, though straining sometimes due to the sluggish tempos provided for him. It was delightful to hear Jane Henschel. Her characterful phrasing as Maria Aegyptiaca, with its many ‘turn’ figures and low range, which descends to a low B-flat, was admirably executed. Mihoko Fujimura, substituting for Lioba Braun, seemed slightly uncomfortable at first, but contributed worthily as Mulier Samaritana.

Andris Nelsons, the Boston Symphony Orchestra’s music director, did a splendid job in working with such diverse musicians, many of whom were new to this challenging work. He generated a finely tuned, well-balanced and texturally-clear reading. The American Boychoir overcame initial reticence with an increasingly assertive delivery. By and large, Nelsons elicited strong, vital playing from the augmented Tanglewood Music Center Orchestra. Even the textural density of the double fugue in Part I was rendered with clean lines. Also notable was the hushed playing and much that was exquisitely handled.

He avoided other conductors’ quirky affectations that can disturb the flow. For the most part he stuck closely to the score, set generally appropriate tempos, even if occasionally the pace slackened but he generated sufficient verve and amplitude to impress substantially. In Part I the entire vocal ensemble suddenly burst out with “Accende, accende lumen sensibus” giving the words enormous power and also belted out the adversarial “Hostem repellas longius” (Our enemies be driven far from us). In a nod to Bernstein, Nelsons added a ritardando into the recapitulation. The choruses’ outburst of “Gloria” during the coda was stupendous, a truly wonderful conclusion, which Mahler described as mirroring “planets whirling in space.” 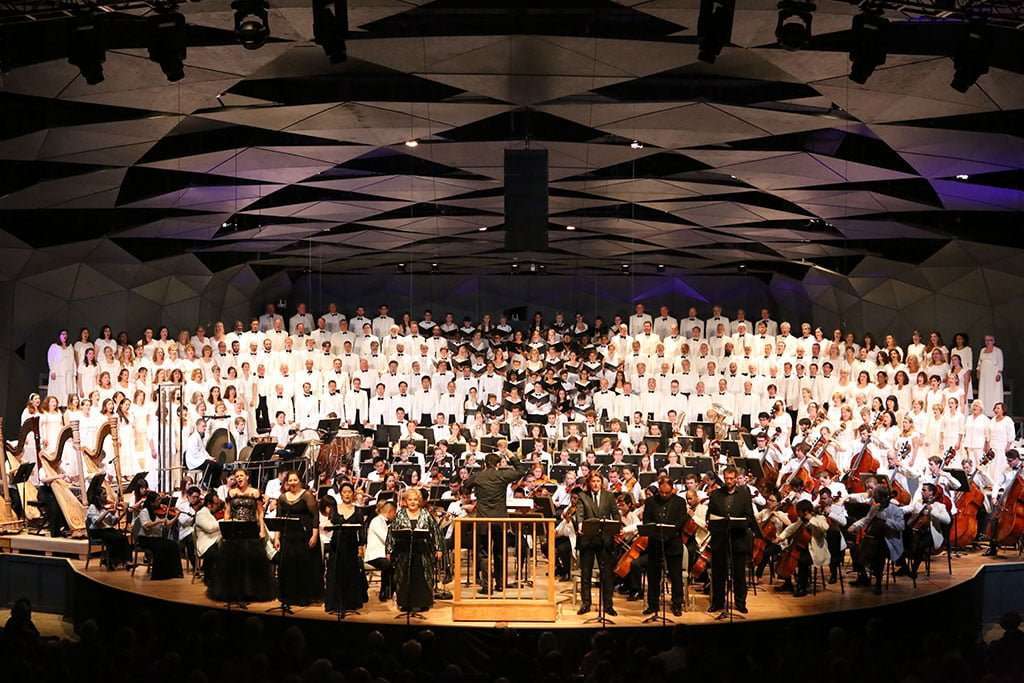 Part II, which took about an hour, was brilliantly shaped by Nelsons, structured intelligently, without letting the musical ‘valleys’ sound dullish and irrelevant. A finely-honed opening section – which quietly introduces the principal motifs (some taken from Part I) that will gradually develop into a full statement of the theme toward the close – sounded appropriately mysterious.

When suddenly the low strings begin the first variation with a jolting fortissimo, I was reminded of how Bernstein reinforced this entrance by stomping with his right foot! Nelsons was tamer, but he still captured the dramatic effect. All went well from the sequence of solo voices’ variations, and with the glowing strains of the orchestral passage that winds its way into the goal of the ‘Chorus Mysticus’.

The choruses entered like a whisper (as Mahler directs) with Goethe’s immortal concluding words that impart the very essence of Being. As the music builds to splendid Fulfillment (as Adorno called it), the dramatic intensity was virtually unbearable. Nelsons held back the tempo slightly to reinforce the tension. Then as overwhelming achievement occurs, all the voices sang out with Goethe’s profound words, “Alles Vergängliche, ist nur ein Gleichnis.” An offstage brass group rang out with the shining assertion of the Light motif, a pronouncement of Enlightenment. Nelsons added a crescendo at the end of the final E-flat chord before the stroke with which this extraordinary work ends, to close this thrilling performance.