Reviewed: 10 May, 2009
Venue: Pizza on the Park, Knightsbridge, London 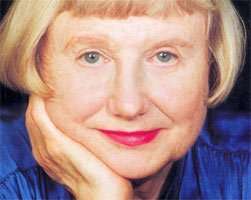 The American jazz singer, pianist and cabaret performer Blossom Dearie, who died in February 2009, was a true original. With her light, little-girl voice she sounded unique. Born in a suburb of New York, she studied classical piano but soon turned to jazz. After she left school she moved to New York City and began singing with The Blue Flames with the Woody Herman Orchestra, and the Blue Reys with Alvino Rey’s band. Moving to France in 1952 she started the Blue Stars singing group which subsequently became the Swingle Singers. In Paris she met Belgian flautist and saxophone player Bobby Jaspar who was to become (briefly) her husband. She played the New York nightclub circuit and made her first appearance in London in 1966 at Ronnie Scott’s. She regularly returned to London for the next thirty years, playing at Ronnie’s, Pizza on the Park and latterly The Green Room at the Café Royal.

Blossom Dearie had an intimate style of performance: a light, breathy voice with an almost whispered delivery that took its audience into its confidence. She sang many songs but favoured those that were written for her by the likes of Cy Coleman and Carolyn Leigh, Bob Dorough, Dave Frishberg, John Wallowitch and Johnny Mercer. She also wrote for herself and collaborated with many lyricists. She was great friends with many jazz legends such as Miles Davis and Gil Evans. She eventually started her own record label, Daffodil Records, so that she could control the content and the marketing of her output. Apart from her television work she contributed to the soundtracks of several films. An abiding image of her, though, is seated at the keyboard in a supper club, singing close into the microphone, performing the idiosyncratic material that made her reputation and gave her a following for over fifty years.

Janet Seidel is a Sydney-based singer and pianist who has been performing jazz-oriented material and the Great American Songbook since high-school and university days. She was inspired by Blossom Dearie, in particular her record of originals, “Blossom Dearie Sings”. Janet’s voice is similar in timbre to that of Blossom. In her cabaret tribute and on her “Dear Blossom” CD she recreates Blossom’s style of delivery without slavishly making it an imitation. It is more an impression of the great and original singer. It is good to have a reminder of the jazz musician’s work and to have somebody else carrying on the tradition. 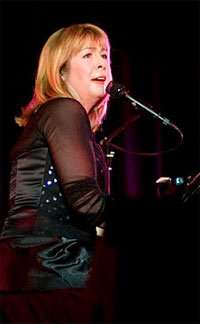 Seidel is joined on her UK tour by her brother David and Chuck Morgan, both excellent musicians who fit together sympathetically. Seidel demonstrates Blossom’s versatility in her choice of songs, opening with ‘Surrey with the Fringe on Top’ (from “Oklahoma!”) which Blossom made truly her own, as a romantic ballad. ‘Tea for two’ is a song which Janet finds particularly moving even though its words were originally meant to be a dummy lyric, a way of seeing how the melody goes with words against it. As it happens lyricist Irving Caesar did not get around to changing them for Vincent Youmans’s music and thus a classic song was born.

‘I’m shadowing you’ is a song that Blossom wrote with Johnny Mercer which is a satirical slant on the work of J. Edgar Hoover and the CIA. Even in something quite serious Blossom enjoyed herself. Janet also sings Michel Legrand’s ‘Once upon a Summertime’, for which Mercer wrote the English lyrics. ‘My attorney Bernie’ is one that Janet, assuming the mantle of Blossom, does in such a sweet and direct way, that it becomes the epitome of charm. There are laughs in John Wallowitch’s ‘Bruce’, about a confused young man who doesn’t quite know which sex to dress as. You feel that Blossom would not have been judgmental, and Janet conveys the sympathy felt for the subject in an awkward situation.

There’s lots more to savour here such as Blossom’s tributes to John Lennon and Georgie Fame, and Janet reveals just what a spirited yet gentle performer she is. Her song to Blossom gives her album its title. As she says: “my song is a tribute to the gentle voice, meticulous and unique artist who so captivated me back in 1975 when I heard her as support artist for Stephane Grapelli in Adelaide’s Festival Theatre.”

Hopefully Janet Seidel will return to the UK after her current tour. Apart from her Blossom Dearie tribute Janet is also a major jazz artist in her own right.