Back on the Boulevard 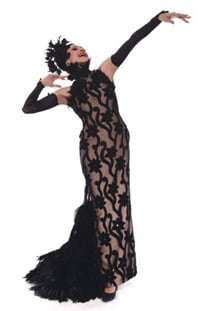 There is no one quite like Liliane Montevecchi. She refuses to be labelled or pigeonholed. She is French-born actress, singer and dancer who has toured the world, appeared in shows and films and presented her semi-autobiographical cabaret and in the process has made her act the epitome of what cabaret is all about. She began her career as a dancer in Roland Petit’s ballet company. The mid-1950s saw her under contract to MGM but cast in secondary roles where dancing was called for, such as “The Glass Slipper” and “Daddy Long Legs”, both starring Leslie Caron, but at least she got to dance with Fred Astaire. She was in “King Creole” with Elvis Presley and also worked with Danny Kaye, Montgomery Clift, Marlon Brando and Jerry Lewis. Other films have included “Wall Street” with Michael Douglas and “How to Lose a Guy in Ten Days” with Matthew McConaughey.

Having worked at the Folies Bergère for nine years, she took over in Robert Dhéry’s Broadway revue “La plume de ma tante” in 1958. Her real discovery, however, took place in 1982 when she was cast in Maury Yeston’s musical “Nine”, based on Federico Fellini’s autobiographical film “8½”. Seven years later came “Grand Hotel”, another Broadway musical, based on the MGM movie. Both productions were directed by Tommy Tune who then created Liliane’s one-woman-show which she has presented at Carnegie Hall, Radio City Music Hall and The Hollywood Bowl and toured. She also took part in the concert version of Sondheim’s “Follies” at Lincoln Center in New York.

Liliane gives the impression that she hasn’t quite yet mastered the English language, that it is still a work in progress, but she knows enough to entertain has the audience in fits of laughter one minute and then cheering her singing and dancing the next. “Did you know I was French?” she enquires modestly before launching into ‘C’est si bon’, after which she reveals that she actually has her dress on back-to-front because she could not reach the zipper.

A few words about her beginnings in show-business reveal that she had to be in ‘silent’ films because she did not have much English, so she shut up and danced instead. Memories of the Folies Bergère bring about Cole Porter’s song about beautiful bosoms, ‘If you like les belles poitrines’ from “Nymph errant”. Liliane’s dance training and her Folies experience means that her timing and her ability to put a number across are both perfect. She knows where to stand, what to do, when to speak and what to say. Her body movements are supple and expressive as she works with her fingers and even, at one point, plonks one leg on the piano – not bad for a septuagenarian.

As she skirts briefly but pointedly through her life and career but without making it sound like one of those ‘and then I did’ compilation shows, she presents a brief history of showbiz as seen through her eyes. She evokes the time of Josephine Baker (‘Danse sauvage’, the banana song), Piaf (‘La vie en rose’), and Mistinguett (‘Mon homme’), who insured her legs for a million dollars although, according to Liliane, they were not that great. She had big knees and buck teeth but she was still charismatic nonetheless.

Paris is evoked, the place where many have met their first love, had their first kiss and experienced their first everything. Cole Porter provides most of the answers about Paris in his songs ‘I love Paris’ (from “Can Can”) and ‘You don’t know Paree’ (“Fifty million Frenchmen”). Liliane sings Sondheim’s tribute to the French capital, ‘Ah! Paris’, which Liliane sang in the Lincoln Center concert version of “Follies”. She also does Sondheim’s marvellous song ‘I never do anything twice’ written for the film “The Seven Percent Solution”. It details the intimacies of a woman who is game to try anything once but will never repeat herself – “Once, yes, once for a lark / Twice, though, loses the spark…” Liliane gets the best out of the suggestive lyrics!

With ‘Boulevard of broken dreams’, ‘Just a gigolo’, ‘Irma la Douce’ and ‘Ne me quitte pas’, Liliane proves she is the best chanteuse to interpret these songs. She does a medley duet of Cole Porter material with Jeff Harnar, presenter of the American Songbook in London and, when Liliane disappears to rearrange her costume, Nathan Martin, her incomparable accompanist, sings the title track from his debut recording “Anywhere with you”.

The best story to come out of the show and out of Liliane’s life is how she got to play on Broadway. Quite by chance she met the mother of film director Oliver Stone in New York, was invited to stay with her, and found there was an audition the following day with Tommy Tune for a new musical. She went, he loved her, although he didn’t know what to do with her, but knew he wanted her in the show. At first she had a line of dialogue and then another line and another, and then she had a real part. The show was Maury Yeston’s “Nine” and Liliane won a Tony and a Drama Desk Award for her troubles. But that seems to have been Liliane’s life – nothing planned just a bit of good luck every now and then. It is fortunate that she’s back in London. It would be your bad luck if you missed her.