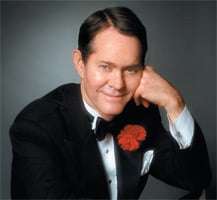 Steve Ross spends his career playing and singing funny songs, when he isn’t singing romantic ditties, but this is the first time he has devoted a complete show to the art of the comic song. Steve and director Duncan Knowles have ransacked the repertoire from the whole of the twentieth-century and come up with a wagonload of wit, a bouquet of barbed ballads, a compilation of comic choruses and a sack-full of salacious chansons to present “Ross on wry”.

As Steve writes: “For a while after I began my professional career, ‘funny’ songs were my stock in trade. I began with some from the music hall, moved through Flanders & Swann and ended up with Cole Porter and Noël Coward. I then discovered revue, novelty and point numbers as well as special material – all of which comprise the source material for this programme.”

Indeed, Michael Flanders & Donald Swann (‘The Gnu’ and ‘Tonga’) and Cole Porter and Noël Coward do take up a large part of Ross’s current excursion. Cole Porter is Ross’s favourite songwriter and he probably performs more of his songs than anything else. The epitome of witty material suits the man, as Steve plies his trade as the sophisticated chanteur and piano-player, he still looks as if he has just arrived from a smart Manhattan hotel lobby or stepped off an ocean liner, circa 1935.

Cole Porter’s ‘list’ songs are just perfect for Steve’s laid-back style of delivery, demonstrated in his handling of Porter’s title song to his 1953 show “Can-Can”. Porter deals in the arcane as well as the mundane and you really need a good education or an entrée into American polite society to get all of his jokes. Another great Porter song is ‘They couldn’t compare to you’ from the 1950 show “Out of this world”, in which Mercury lists all his girlfriends up on Mount Olympus. As Steve says, a lot of the songs are quite salacious because many of them deal with the art or the act of ‘doing it’. There’s a really hilarious song by Stan Daniels in which a Hollywood butler answers a call and has to explain why his master cannot come to the phone – he has sexual appointments with practically every name in the movie world’s celebrity book.

Talking of ‘doing it’ takes us back to Cole Porter and ‘Let’s do it, let’s fall in love’. Steve sings this and also Noël Coward’s parody version: “E Allen Poe, ho ho ho, does it / But he does it in verse / H Beecher Stowe does it / But she has to rehearse”. There’s more Coward in ‘Bar on the Piccola Marina’ where Mrs Wentworth-Brewster found a new lease of love life after Mr W-B kicked the bucket. And in Coward’s ’You’ll have to show it to mother’, we never really find out what ‘it’ actually is – but we can always imagine the worst.

The rest of Steve’s programme is made up of rather sweet little songs like Porter’s ‘Tale of the oyster’, Murray Grand’s ‘The spider and the fly’, Milton Ager and Jack Yellen’s ‘Hungry women’ (“I feed ‘em and weep!”), John Wallowitch’s ‘Dutch ecology’, on what it’s like to be a dike in Holland and have a person stick their finger in you, and ‘Teeny tiny lady’, Marshall Barker and David Ross’s very unsettling story about a very small girl indeed: chilling but oddly funny too, and Steve gives it a touch of the macabre. The American Songbook Season host Jeff Harnar does a duet with Steve of Cy Coleman & Michael Stewart’s ‘Turning on’ from the show “I love my wife”, another list song, and Steve ends proceedings with Rodgers & Hart’s ‘At the Roxy Music Hall’ from “I married an angel”.

It’s a delightful evening and in fact one of Steve Ross’s best compilations, the ingredients seasoned with just enough chat about his career and the songs, spicing it up with a few jokes and his own inimitable witticisms, and playing all that marvellous music with his brilliant signature skills as a pianist. And they say cabaret is dead. Not while Steve Ross is around it isn’t!