Mercer, Moon River and Me 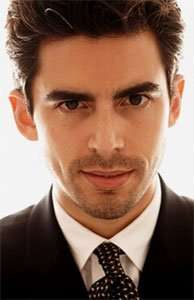 Tony DeSare is a charming, assured performer, a brilliant pianist and superb interpreter of the best of the American Songbook. Born in the States, he studied piano from the age of eleven and was drawn to the pop-songs of the 1970s and 1980s by his parents’ interest in them. However, he also discovered the songs of an earlier age, music that has become timeless American Songbook classics. Tony’s researches led him to the songs of Johnny Mercer (1909-76), the Savannah, Georgia-born lyricist and composer whose natural facility with words and music made him stand out from the crowd of Tin Pan Alley writers. There’s an extra depth to Mercer’s lyrics and something otherworldly about his music.

Johnny Mercer worked with the likes of Jerome Kern, Hoagy Carmichael, Harold Arlen, Richard Whiting, Henry Mancini and Gene DePaul, the cream of US song-writing business. A former actor and band-singer, Mercer was responsible for the music and/or lyrics to songs such as ‘Jeepers creepers’, ‘Goody goody’, ‘Glow worm’, ‘Dream’, ‘Laura’, ‘That old black magic’, ‘Too marvellous for words’, ‘Hooray for Hollywood’, ‘Tangerine’, ‘Accentuate the positive’, ‘You must have been a beautiful baby’, ‘Charade’, ‘Moon River’ and ‘Days of wine and roses’ among many other remarkable songs. Tony DeSare sings and plays a dozen of them and they are all winners. Put your finger in a Mercer song pie, and you only come up with plums.

Tony begins with ‘I thought about you’, the song that begins with “I took a trip on a train…” and then he goes into ‘In the cool, cool, cool of the evening’, the Academy Award-winning song that Mercer wrote with Hoagy Carmichael for Bing Crosby in the 1951 film “Here comes the bride”. Mercer often returned to his Georgia roots when writing songs, giving them a different and down-to-earth setting that seems to add strength to his best work. In ‘Moon River’ you can picture the “Breakfast at Tiffany’s” heroine Holly Golightly recalling her childhood in the country. ‘Have you got any castles, baby?’ was written with Richard Whiting, an unusual lyric but one that hits home. ‘That old black magic’ is one of Mercer and Harold Arlen’s most-famous songs that everybody including Marilyn Monroe (in “Bus Stop”) has sung. Even Spike Jones and his City Slickers did a notable send-up version. Tony plays it cool and sings it straight. 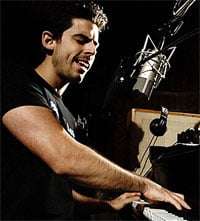 More reflective is ‘When the world was young’ for which Mercer provided the English lyrics to a French tune. He also wrote the English words for ‘Autumn leaves’, the French song by Joseph Kosma and Jacques Prévert (‘Les feuilles mortes’, first heard in the 1946 film “Les portes de la nuit”). The tune was a US No.1 Billboard chart hit for pianist Roger Williams in 1955. DeSare gives it special treatment by playing it first in the style of New Orleans piano-player James Booker and then as Oscar Peterson. Nothing actually to do with Mercer but still proof that DeSare is versatile.

He is aided immeasurably by Edward Decker on (seven-string) guitar and David Manington on bass, who provide a subtly fitting accompaniment to Tony’s vocals and pianism: three musicians at the top of their class. And as if that were not enough, Tony DeSare proves to be a good songwriter, too, providing both words and music to some fine material including ‘A little bit closer’, ‘How will I say I love you?’ and the theme song to the film “My Date with Drew”, about a man with a Drew Barrymore obsession. More of his songs are on Tony’s album, “Road Show” (Telarc).

The evening of “Mercer, Moon River and Me” continues with ‘Moon River’, a song that nearly didn’t happen. Mercer had written two lyrics to Henry Mancini’s tune, the other being ‘I’m Holly’. The studio didn’t like ‘Moon River’ but Mercer, Mancini and Blake Edwards, director of “Breakfast at Tiffany’s”, fought for it and won and it took an Oscar. Tony ends his set with ‘Somethin’s gotta give’ and ‘Blues in the night’ (music by Arlen) in which he proves the perfect interpreter of Mercer’s work. As an encore he gives us Chuck Berry’s hit ‘Johnny B Goode’, rounding things off in raucous, rocking style.

The depth of feeling in DeSare’s voice matches the quality of Mercer’s songs; his lower notes put you in mind of Sinatra, an obvious influence. It has to be said that he’s better than Boublé and greater than Groban, with a voice and manner that command attention, who makes a song his own. Tony DeSare is the best cabaret debut London has had for years.