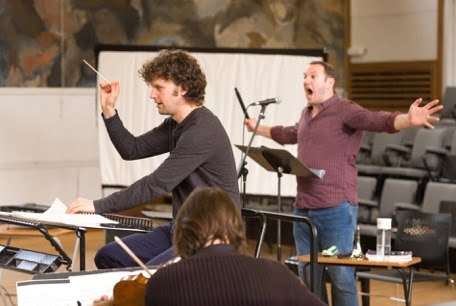 Here’s a teaser. How can an audience of 500 in the 2,500-seater Royal Festival Hall be a ‘sell-out’? Well it certainly was at this performance by a newly ensconced Associate at Southbank Centre, the Aurora Orchestra. And the reason? The only seats available were on the platform and in the choir area, with the Orchestra reversed, the players with their backs to the main part of the auditorium; the woodwind and brass stopped from stepping backwards by the sounding boards on loan from the closed-for-renovation Queen Elizabeth Hall. The acoustic sails normally rising above the platform were all vertical save for the front-most one, which was lowered to extend a vertical wall above the boards and onto which was beamed a cartoon image of a flickering candle (by Simon Evans).

How intimate the space became, the serried ranks of empty seats in darkness, as the Orchestra amassed and stood save for cellists, bassists and timpanist. As Evans’s images changed to tell Prometheus’s story, Nicholas Collon topped and tailed Beethoven’s score with the stormy ‘Introduction’ (not the Overture) – accompanying not only Prometheus and his fashioning of man and woman from clay and his gift of fire to them but also Zeus’s response by sending Pandora with her box containing all the evils of the world, that escaped – all but hope – when she opened the lid… That hope, the one vestige left for humanity, could be embodied by the ‘Eroica’ theme that Beethoven used in the ballet’s Finale, here sprightly done. 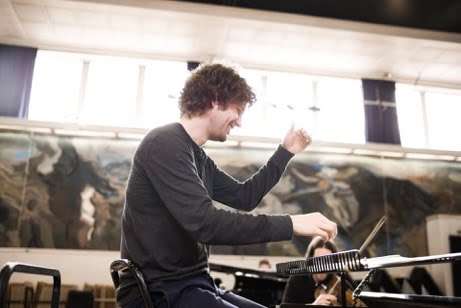 As the applause dwindled, suddenly we were aware of someone clapping on – standing between choir and side stalls and in full concert dress. Muttering replaced hands-together as he started drawing on a large pad, replicated on the upended acoustic sail, representations à la da Vinci of the human body. During this distraction the stage was reset with piano (where did that come from?) and tuned percussion so that HK Gruber’s Frankenstein!! followed seamlessly. Marcus Farnsworth – dropping the leaves from the pad – relished H. C. Artmann’s children’s verse as translated by Harriet Watts (not credited in the programme) as he rushed from above the stage into the auditorium, down the stalls and on to the platform.

Gruber’s transparent score – especially in the chamber version as performed here, for five strings, five winds and brass and a percussionist and a pianist – is as wittily eclectic as Artmann’s verse, requiring most of the players also to take up toy instruments to colour the timbres further, such as whirling plastic tubing above their heads with the resulting pitches depending on the speed; the percussionist blew up and popped paper bags; the pianist switched to a toy piano. Gruber’s evocation of his appropriately subtitled Pan-demonium was bewitchingly done by Aurora, with Farnsworth joining in with swanee whistles.

Enhancing the surreal notion of modern heroes – including references to (Miss) Dracula, James Bond and Goldfinger, John Wayne, Superman, Batman and Robin, let alone Frankenstein, werewolves and an oblique nod to Robinson Crusoe – were more of Evans’s illustrations, something in the Gerald Scarfe style of caricature. Eventually the audience realised it could laugh along with such infectious nonsense. The surprises continued at the end, dissipating into silence as the performers left the stage without a curtain call. 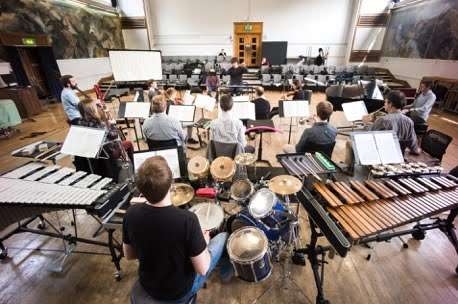 The theatrical presentation continued. During the interval the stage was cleared of everything but needed chairs and the front-most acoustic sail raised and tilted to provide a baffle to bounce the sound back towards the organ. Farnsworth remained, placing jars about the stage. He took up a volume and read a passage from Mary Shelley’s Frankenstein. Here the circle was completed – both Prometheus and Frankenstein created men, using elements (fire and electricity respectively) to animate their creations – and it is such elemental forces that surge through Beethoven’s Fifth Symphony.

Curiously it was a weekend of Beethoven’s Fifth, as the BBC broadcast Ian Hislop’s programme about the work the previous evening, aided and abetted by Sir John Eliot Gardiner, while almost at the same time as this RFH performance BBC4 screened Gardiner’s complete account. The RFH sound was incredibly immediate and perfectly balanced, and there was a conviction and impetus here that I had found slightly lacking at Aurora’s Proms ‘Pastoral’ Symphony last year, which was similarly done from memory. 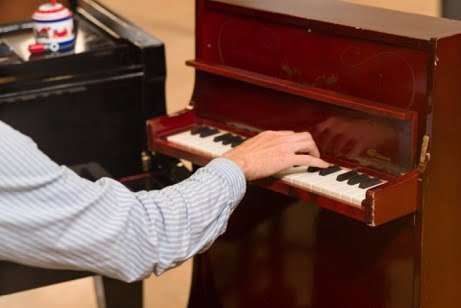 The orchestral layout was changed from the first half. Now Collon had antiphonal violins. Even with small forces (just three violas), Beethoven’s fortissimo opening salvoes packed a real punch, and the wind instruments had distinct timbres and personalities. The three parts not needed until the Finale – piccolo, contrabassoon and three trombones – arrived only after the second movement. Performance-wise, such care and attention to detail (and all from memory!) was as exhilarating as exemplary and Collon was careful to enhance the loud passages with remarkable quieter passages, not least in the transformation from Scherzo to Finale, which must have had a heavy influence on Berlioz.

And if such a stirring, overwhelming rendition was not enough, there was more. Collon explained that the advantage of learning parts by heart meant that players don’t have to stick in traditional positions. To give the audience an insight as to what musicians hear while they perform, they (as if by magic lighting the jars that Farnsworth had put out) moved to be amongst the audience. They proceeded to encore the last section of the Finale (from bar 153) – after one further sentence from Shelley by Marcus Farnsworth: “Life and death appeared to me ideal bounds, which I should first break through, and pour a torrent of light into our dark world.” I had two violins, a flute and a trombone round me, but their proximity didn’t destroy the balance of the other instruments; the very air was alive with music.

Following on from Iván Fischer’s novel use of the Royal Festival Hall for his innovative production of Die Zauberflöte and Colin Currie’s equally successful Steve Reich programme, the Aurora Orchestra proved that this is one of the most adaptable venues in London. This Aurora concert was utterly enthralling, re-inventing music in vivid fashion.