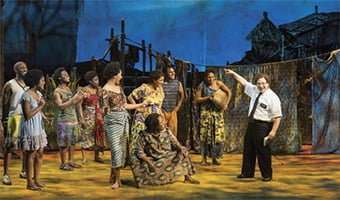 You could probably count the number of musicals made from Biblical or religious subjects on one hand. Top of the list is Tim Rice and Andrew Lloyd Webber’s Jesus Christ Superstar. Then, from the same stable, Joseph and His Amazing Technicolor Dreamcoat followed by Stephen Schwartz’s Godspell, Rodgers & Hammerstein’s The Sound of Music and perhaps Richard Thomas and Stewart Lee’s Jerry Springer The Opera, which has religious overtones. There has been more than one musical based on the life of Bernadette of Lourdes but nobody so far has staged one based on a religion… until now. 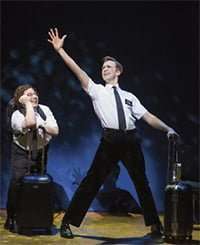 Welcome, then, to The Book of Mormon. It arrives with odd credentials, having been written by Trey Parker and Matt Stone, creators of the South Park television series, and Robert Lopez, of Avenue Q. All their work is generally satirical, scurrilous and in questionable taste. Notwithstanding, The Book of Mormon is still, after two years and nine Tony Awards, the hottest ticket on Broadway, and on present showing it will be the same in London. I cannot imagine seeing another show this year that is as sweet and charming. Admittedly it takes satirical swipes at organised religion but it does so in such an affectionate way that any sense of outrage evaporates. Just a few weeks ago I answered the door to two squeaky-clean, tidily dressed young Mormon elders only to send them on their way, their having failed to convert a non-believer. I have argued for hours with members of the Church of Latter-Day Saints about Joseph Smith and the religion he invented in the 1820s, following his angelic visions, and got nowhere slowly. 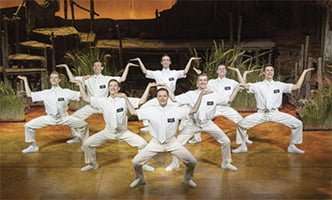 The Book of Mormon (the musical) is about two such elders who are sent to Uganda to preach. One, Elder Price, would rather have gone to Florida for his two-year mission, while his constant companion is the nerdish Elder Cunningham, a five-foot nothing, fantasising, overweight slob, and irritating with it too. On arriving in Uganda, they are faced with terrible conditions of poverty, famine and AIDS for the locals who are ruled by the ‘General’, a warlord obsessed with female circumcision. They are shocked to find that Africa is nothing like The Lion King! The district leader, Elder McKinley, whose fellow missionaries have failed to convert anybody to Mormonism, warns the new arrivals about what to avoid, including homosexual thoughts (cue, song: ‘Turn it off’). It is Cunningham who is the unlikely hero. Never having read the Book of Mormon, he makes it up by inventing references to Star Wars and The Hobbit, thus enthusing the congregation.

Then there is ‘Spooky Mormon Hell Dream’, a nightmare sequence in which the missionaries are tormented by visions of Genghis Khan, Hitler, serial killer Jeffrey Dahmer and O. J. Simpson’s lawyer, Johnnie Cochran. The musical numbers are hilarious, staged as Broadway-style show-stopping numbers with all the panache and inappropriate choreographic verve of Hello, Dolly! and also sending up the faux-ethnic atmosphere of The Lion King. For a new musical many of the numbers are quite memorable and would all fit into any traditional Broadway show. The energetic members of the company work their socks off vocally and choreographically. Gavin Creel as Price and Jared Gerther as Cunningham are well matched and extremely funny. Stephen Ashfield as the closet-gay McKinley is a hoot and a half, while the assorted Ugandans are given tongue-in-cheek, eye-winking performances with Chris Jarman as the ‘General’ with an unmentionable name. There’s no question about The Book of Mormon being a success, a real tonic and just what the Elder ordered.