The Boys from Syracuse
Musical comedy with score by Richard Rodgers, lyrics by Lorenz Hart and book by George Abbott based on Shakespeare’s A Comedy of Errors 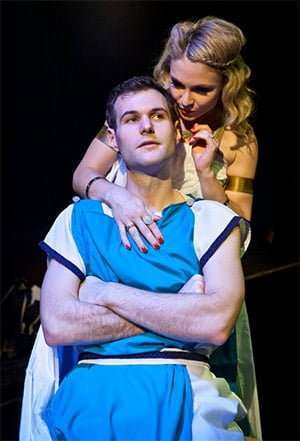 The great song-writing team of Richard Rodgers and Lorenz Hart were at their peak in 1938 when, with director George Abbott, they conceived the idea for a musical version of Shakespeare’s The Comedy of Errors. Titled The Boys from Syracuse, it opens with an announcement: “This is a drama of Ancient Greece. It is a story of mistaken identity. If it’s good enough for Shakespeare, it’s good enough for us!”. There had not been a musical based on Shakespeare before, and there was particular appeal for the lyricist, whose younger brother Teddy Hart was an actor. Teddy was always finding himself auditioning for the same parts as the performer Jimmy Savo, who was equally short of stature. This show, with its story of two sets of twins, would give both men good parts as the slaves named Dromio. The result was one of the creative team’s smash hits.

This buoyant production ably demonstrates why the show worked so well, its lively pace and musical brilliance more than compensating for some of the scattershot jokes. Some of the gags might have been new in 1938 and most still raise chuckles, along with fresh comic moments such as a brief homage to Tommy Cooper. Fortunately, the brisk staging means that it is never long before the next number comes along, and what a score it is, a dozen melodic treats full of invention and lyrical wit. ‘This can’t be love’, given a deliciously jazzy arrangement that Michael Riley clearly enjoys playing, is one of the show’s standards, though the witty verse in which the singer laments the fate of distant relatives Romeo and Juliet is rarely heard. 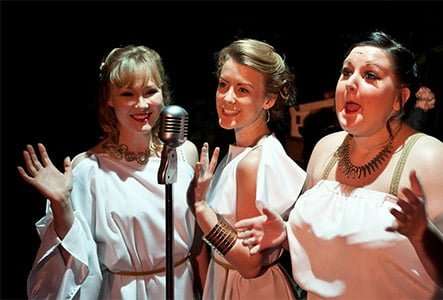 Rodgers was noted for the many lovely waltzes he fashioned. ‘Falling in love with love’ is one of his most rapturous, though it also has one of Hart’s most jaundiced lyrics: “Caring too much is such a juvenile fancy / Learning to trust is just for children in school.” Carrie Sutton sings it well, and the fine company gives enthusiastically committed performances, meeting the vocal demands as well as those of choreographer Mark Smith – the original had choreography by George Balanchine. Occasionally, the actions are over-fussy – some of the lyrics for ‘Dear old Syracuse’ and the comic duet ‘What can you do with a man?’ were swallowed up by the zealous physicality of the staging, but most of the numbers, such as the other comic duet ‘He and she’ and the policemen’s chorus ‘Come with me (to jail)’ are splendidly staged.

Mention must be made, too, of the neglected but gorgeous ballads, ‘You have cast your shadow on the sea’ and ‘The shortest day of the year’, which shocked critic Walter Kerr with their “unexpected modulations”. Aaron Hayes Rogers and Oliver Seymour Marsh are the handsome young heroes, and their Dromios are expertly depicted by Alan McHale and Matthew Cavendish, the first with a Tommy Trinder chin, the second recalling the young Norman Wisdom. Hart wrote a tender solo for Teddy, the affectionately wistful ‘Big brother’, which is often omitted from revivals, and is not reinstated here, a pity.

The Boys from Syracuse boasts one of the great Broadway showstoppers. When the show was in rehearsal a young unknown composer-arranger, Hugh Martin (later to write the songs for Judy Garland’s film Meet Me in St Louis), wrote to Rodgers bemoaning that stage musicals, unlike their celluloid equivalents, never employed a vocal arranger. Rodgers gave him the chance to do this for three female singers echoing the sounds produced by sister singing acts of the time. He came up with a devastatingly clever arrangement for the song ‘Sing for your supper’ that has often been performed whenever three ladies want a rousing showcase. Carrie Sutton, Natalie Woods and Cara Dudgeon have great fun with it here. Another rouser is the climactic ‘Oh, Diogenes!’ sung and danced with abandon by Kaisa Hammurlund as one of several glamorously long-limbed courtesans. Mary Farragher, as a Seeress, does not have much to do but she gets to utter the line: “The venom clamours of a jealous woman / Poisons more deadly than a mad dog’s tooth”. “Shakespeare!” shouts one of the cast, identifying the only line of the Bard’s in the show.

Surprisingly The Boys from Syracuse was not staged in London until 1964, when a successful off-Broadway revival prompted a production at Drury Lane with Bob Monkhouse and Ronnie Corbett. But, where the New York critics had cheered the words (“outrageously corny and naughty”) the London reviewers were mercilessly stone-faced, and its run was brief. A happier production was mounted in Regent’s Park in 1991, with spirited direction by Judi Dench. A reminder of days when musicals were pure escapism full of glamour, melody and wit, The Boys from Syracuse is a theatrical treat.