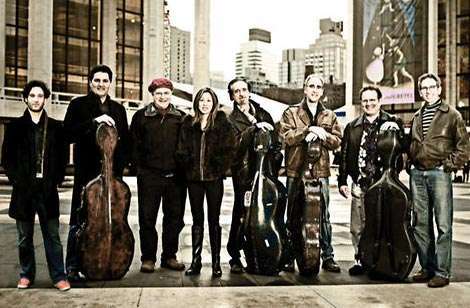 If there’s any question as to why the cello is beloved, this concert by “The Cellists of Lincoln Center” left no doubt about the reasons. “Cellists are accessible, fun-loving, non-neurotic musicians” wrote David Finckel, co-artistic director of the Chamber Music Society of Lincoln Center, which presented this recital, and a member of the Emerson String Quartet (which he will be leaving next month after 34 years with that ensemble). He listed nine other reasons, but the diverse music on the program gave the best answers of all.

In a nutshell, the cello is a sexy instrument with a really great personality. It looks good – one couldn’t help but notice the colors of the eight cellos, ranging from golden honey to various shades of brown to fiery reddish-orange. And, to further quote Finckel, “it has a really nice shape.” Add to that a voice that’s resonant, full, rich and warm, and the seduction starts to take hold. What this wide-ranging program demonstrated is why that initial attraction grows into something deeper and long-lasting.

Two pieces for solo cello, by Elliott Carter and Henri Dutilleux, demonstrated the instrument’s extensive tonal range and textures. In Carter’s Figment No.2 (2001), Sherry showed how good the cello can sound no matter what part of the instrument you’re playing. He has a beautiful playing form that was especially evident when his left arm – with hand, wrist and elbow on a level plane – traveled up and down the fingerboard in a flurry of harmonics. After reaching the edge of the fingerboard on an upper string, he dropped down to the lower strings and brought out their luscious tone.

Altstaedt, winner of the Credit Suisse Young Artist Award in 2010, tackled Dutilleux’s Trois strophes sur le nom de Sacher (the conductor Paul Sacher), dazzling music written in 1976 and expanded six years later that seemed to touch on every possible cello technique for either hand, and even required re-tuning of the lower strings. This was something you had to watch and not just hear: there were slides up and down the fingerboard, harmonics high and low, pizzicatos, gentle strumming, sul ponticello (scratching on the bridge), digging into the lower strings, and col legno (tapping with the stick of the bow). Altstaedt appeared comfortable no matter what he was doing, at one point producing a harmonic then racing into a soft scramble around the strings while building up volume and tone. Later, Altstaedt stole the show again as lead cellist in two tangos, one by Igor Stravinsky (1940, originally for piano) and the other by Peter Schickele (1973).

All the cellists shone while celebrating an instrument with many charms and layers. At times the intonation was off (especially in the first movement of Jean Barrière’s 1739 Sonata, where Grossman sounded flat against Zlotkin) or the players slightly out of synch, but the warmth and soulfulness of the performances easily overcame the glitches. An odd interruption startled the players and audience early on, just before Alexandre Tansman’s Two Movements for Four Cellos (1935). A man in the darkened auditorium shouted for the theater to raise the lights “for those of us who haven’t memorized the program”. Many shushed him in response. The performers – Finckel, Grossman, Brey and Figueroa – helped settle the prickly charge in the air. Their parts held together like caramel during the first movement and conjured many allures: a lover’s voice, a full-bodied wine, a crackling fire, and a soothing comfortable robe.

The auditorium lights came up afterward, which indeed was helpful to reading the program notes. With the groupings varying from four cellists to eight to two, the staging was also critical. The concert opened with eight cellos split into two groups on opposite sides. Then a spotlight shone on Finckel as he performed John Tavener’s Threnos, written in 1990 in memory of a close friend. It begins with soft double-stops and ends on an open C string, at which point the full complement of cellists launched into Giovanni Gabrieli’s 16th-century composition. It became clear why two groups were set apart; the music sounded much like a fanfare announcing the arrival of a monarch.

The ensemble came together again at the close of each half of the concert. Pablo Casals’s Sardana (1927), a homage to the cellist’s Catalonian homeland, was perhaps the most generic piece of the afternoon, especially coming on the heels of Arvo Pärt’s Fratres. Originally written in 1977 and adapted for cello quartet in 1983, Fratres strongly evokes a somber procession with a sustained open-string double-stop laying the ground for three contrapuntal parts reminiscent of organ pipes. (Such purity of harmony and line returned in the encore by J. S. Bach, which Brey said was written days before the composer died when he was “completely removed from worldly concerns”.)

The official program closed with an interesting mix of Brazilian and Bach influences in Heitor Villa-Lobos’s 1930 Bachianas brasileiras No.1. Again the cello’s many facets were on display: a lyrical and romantic ‘Introduction’, followed by a plaintive ‘Preludio’, and a closing ‘Fugue’ in which the eight cellists were paired off like synchronized swimmers. The leading duo, Brey and Zlotkin, was well matched, but Sherry and Moon took the prize for synchronicity. The group finished on an open C – and with big smiles. The cello, they had demonstrated, is not only non-neurotic, it is also generous, substantial, well-grounded and down to earth.