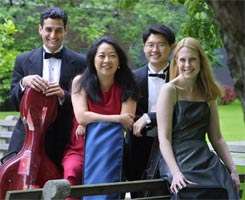 This was the second of six concerts featuring Beethoven’s complete string quartets in the order prescribed by the “Slee cycle”, with each concert showcasing a different set of performers.

The concert began with a ‘middle’ period work, the ‘Harp’. This epithet, not coined by Beethoven, alludes to the first movement’s pizzicato arpeggio section. The Daedalus Quartet’s sibling violinists alternated leadership. Min-Young Kim led the initial work, and she had a brilliant, piercing tone that always cut through the other players’ contributions, even when her part had a subordinate role. All the musicians brought youthful energy throughout the concert, but beneath the shininess, their interpretation lacked depth.

The first movement of the ‘Harp’ featured stylistic problems that recurred throughout the concert – crescendos that grew too quickly, pianissimos that weren’t soft enough, and inner voices that weren’t adequately heard. Kim has a flamboyant technique that would have suited her well in a Romantic violin concerto, yet she and her colleagues did not highlight the piece’s wonderful harmonic and structural subtleties. The second movement exposed the group’s lack of unity in articulation, with the lower strings entering late in the start of unified phrases. Kim’s narrow dynamic range ironically became an asset in that she remained loud enough to drown out the prolonged ring of a cell-phone. The performers gave an exciting start to the passionate Presto movement, yet their enthusiasm wore thin on the ear due to always giving the music their all, thus having nowhere to build up to, as well as having little awareness of which voice should be featured at any given time. The musicians’ consistent brightness of tone, even in the quieter sections, continued throughout the finale.

Kyu-Young Kim led the group for the Opus 18 work. Kim had a bright sound only slightly less brilliant than his sister’s. His tone was lighter and sweeter in the softer passages, which allowed the ensemble to have a more blended sound; however, his tone became strained in the highest register. His phrasing in the second movement’s melodic lines was sensitive, yet he added occasional glissandos in his shifts that seemed stylistically inappropriate for this Classical work. The scherzo renewed the energetic excitement that had drifted away during the previous slow movement, yet the energy could not be sustained. Opus 18/Number 2 has been nicknamed the ‘Compliments Quartet’ due to its uncomplicated nature with fewer contrasts than Beethoven’s norm. One would therefore expect the performers to highlight any unexpected harmonic patterns, but this was wishful thinking. The musicians concluded the piece with more fast, loud playing, with every fortissimo identical.

Opus 131 consists of seven interconnected movements, and less homogenous, highlighted by the composer’s notating on the autograph score: “Stolen and gathered together from various things here and there.”

The opening fugue sounded positively modern in its expressive dissonance. Min-Young Kim was back in the leader’s chair, and again she overpowered the other players with her brilliant tone, although when violist Jessica Thompson’s playing was audible, it was notable for its dark beauty, particularly in the viola/cello duet in the Variations movement. Raman Ramakrishnan overplayed his instrument in the fortissimos, never allowing his cello to ring to its maximum capacity. The youthful energy returned somewhat predictably in the following Presto, yet there was an incongruity of timing during the ritardandos before the pauses. Again, the brilliant final Allegro built up too fast, thus losing impact in the climaxes when it was most needed.