The Mikado, or The Town of Titipu – Operetta in two acts with music by Sir Arthur Sullivan to a text by W. S. Gilbert 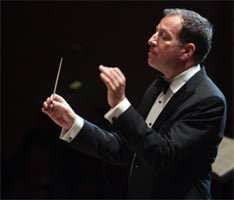 The Collegiate Chorale, now under the tutelage of music director James Bagwell, is in its seventieth season since its founding in 1941 by Robert Shaw. The Chorale teamed with the American Symphony Orchestra and a cast of Broadway stars for a delightful performance of Gilbert & Sullivan’s The Mikado.

As composers and lyricists, from the Gershwins to Stephen Sondheim, have acknowledged, the G&S legacy has greatly influenced the development of the American musical comedy, so it is not surprising that performers expert in that medium have just the right talents for also performing G&S. The experienced and talented Ted Sperling, an accomplished Broadway musician, conducted and directed with a sure hand and with evident appreciation and affection for this perennial favorite. 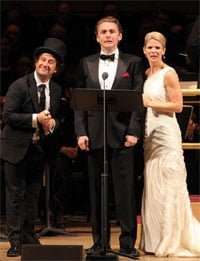 Christopher Fitzgerald, who recently starred on Broadway in Finian’s Rainbow and Young Frankenstein, was an uproarious Ko-Ko, the “cheap tailor” who has been thrust into the unlikely position of Lord High Executioner of the Town of Titipu. Fitzgerald delivered Gilbert’s witty words – and also some clever topical additions to Ko-Ko’s “little list” written by Joe Keenan – in a fine baritone voice and with perfect comedic timing, yet brought a tender quality to his ‘Tit-willow’ lament.

The romantic leads were Broadway veterans Jason Danieley and Kelli O’Hara. They sang beautifully in their ardent love-duet and in several larger ensembles, and excelled in their solo songs – he in ‘A wand’ring minstrel I’, and she in an exquisite rendition of ‘The sun whose rays are all ablaze’. Victoria Clark, best known for her Tony Award-winning performance in The Light in the Piazza, was at turns threatening, funny, and poignant as Katisha, the elderly lady of the Mikado’s court who desires Nanki-Poo – to his consternation – but ends up settling for Ko-Ko. Her ‘Alone, and yet alive’ was quite touching, and her duet with Ko-Ko, ‘There is beauty in the bellow of the blast’, was boisterous. 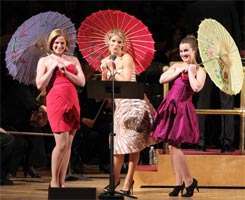 Jonathan Freeman, who is currently appearing in Mary Poppins, his third Disney musical on Broadway, was brilliant as Pooh-Bah, the “Lord High Everything Else”, a haughty nobleman who, when all the officers of State resigned rather than serve under an ex-tailor, assumed all of their offices – and their salaries. His dialogues with Ko-Ko are among Gilbert’s cleverest, and Freeman and Fitzgerald brought them off deliciously. Freeman’s deep voice (the evil Jafar in Disney’s animated film, Aladdin) resonated in solos and ensembles, notably in the trio ‘I am so proud’ with Ko-Ko and Pish-Tush, the latter portrayed excellently by Steve Rosen. Also an experienced Broadway hand, Rosen made fine contributions in his solo, ‘Our great Mikado, virtuous man’, and in the charming ‘Madrigal’ in Act Two.

Lauren Worsham and Amy Justman were delightful joining with O’Hara in ‘Three little maids from school’, and as Yum-Yum’s bridesmaids. Worsham also gave a fine account of Pitti-Sing’s conspiracy with Ko-Ko and Pooh-Bah to deceive the Mikado in ‘The criminal cried as he dropped him down’. Last but by no means least was Chuck Cooper in the title role – one of Gilbert’s so-called ‘second-act basses’ who do not appear until after intermission. Cooper, whose extensive theatrical credits go back some thirty years, delivered the Mikado’s two songs and humorous dialogue with gusto, interacting hilariously with Katisha and the conspiratorial trio.

As this concert was a highlight of The Collegiate Chorale’s season, the evening was very much focused on its 175 members. As “gentlemen of Japan” and Yum-Yum’s schoolgirl classmates, they sang Sullivan’s choral numbers with marvelous beauty and a precision that made Gilbert’s lyrics clearly understandable. Although more than five times the number of choristers as in a typical staged Mikado, they remained in fine balance with the soloists (skillfully enhanced by sound designer Scott Lehrer to accommodate the auditorium’s large size and the vocalist’s lack of projection) and the excellent ASO, its thirty-five musicians forming a slightly larger ensemble than the pit orchestra for which Sullivan originally wrote.

Although this was a one-off event with rudimentary scenery, costumes and props, the uniformly excellent performers, under Sperling’s lively direction, made this much more than a concert. Full justice was done to Sullivan’s charming music and Gilbert’s acerbic wit to bring The Mikado to life.