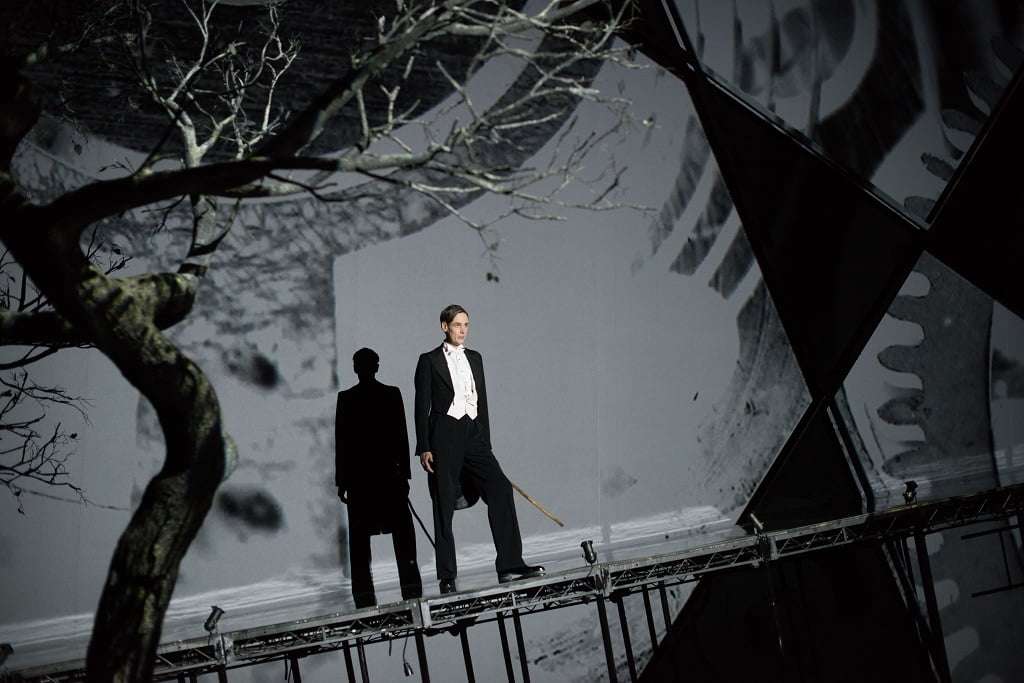 And you thought Schubert wrote Winterreise. He did of course, but not like this. In 1993 his voice-and-piano settings of Wilhelm Müller’s twenty-four poems were re-imagined by composer Hans Zender (born in 1936, and he’s one of the best-kept secrets among conductors, although numerous recordings testify to his individual perceptions across a range of repertoire). He has orchestrated Winterreise for a diverse ensemble that includes guitar, accordion, soprano saxophone, oboe d’amore and enough percussion for four players. As for Netia Jones’s staging, I quote that her “multimedia approach integrates film, video projections and design into live performance, using multi-layered imagery to realise a monochrome world of shadow and light, mirroring the cycle’s melancholic themes.” So does the music!

Props are few, a weather-beaten tree, a chair… At the outset we hear footsteps approaching, crunching the snow, and with col legno effects adding to the eerie, suspenseful atmosphere, with soon the outlines of the first song, ‘Gute Nacht’, appearing, ghoulishly. When the melody does arrive in bloom it is sensitively scored by Zender, and throughout the cycle (lasting here 95 minutes, at least twenty more than the average), his impressionistic/expressionistic approach reflecting his original-composition modernist tendencies yet respects Schubert (if with additions) and also offers a wide-ranging musical perspective that, sporadically, might suggest Mahler’s Des Knaben Wunderhorn.

At first, the wanderer (Ian Bostridge of course) reviews past seasons but there is no doubt that he is isolated in the bleak midwinter; the ambience is black, an effect highlighted by minimal lighting and the wintry images, such as a forest surrounded by a thick carpet of snow. Although Zender’s use of instruments can be sweet and beguiling, he can also be graphic when the text demands (dogs, water, chains…) and the English-translated prose is vividly projected onto the screen in foot-high upper-case letters, but not always, and, depending on seating position, those words placed far-left or -right may have disenfranchised some in the audience. 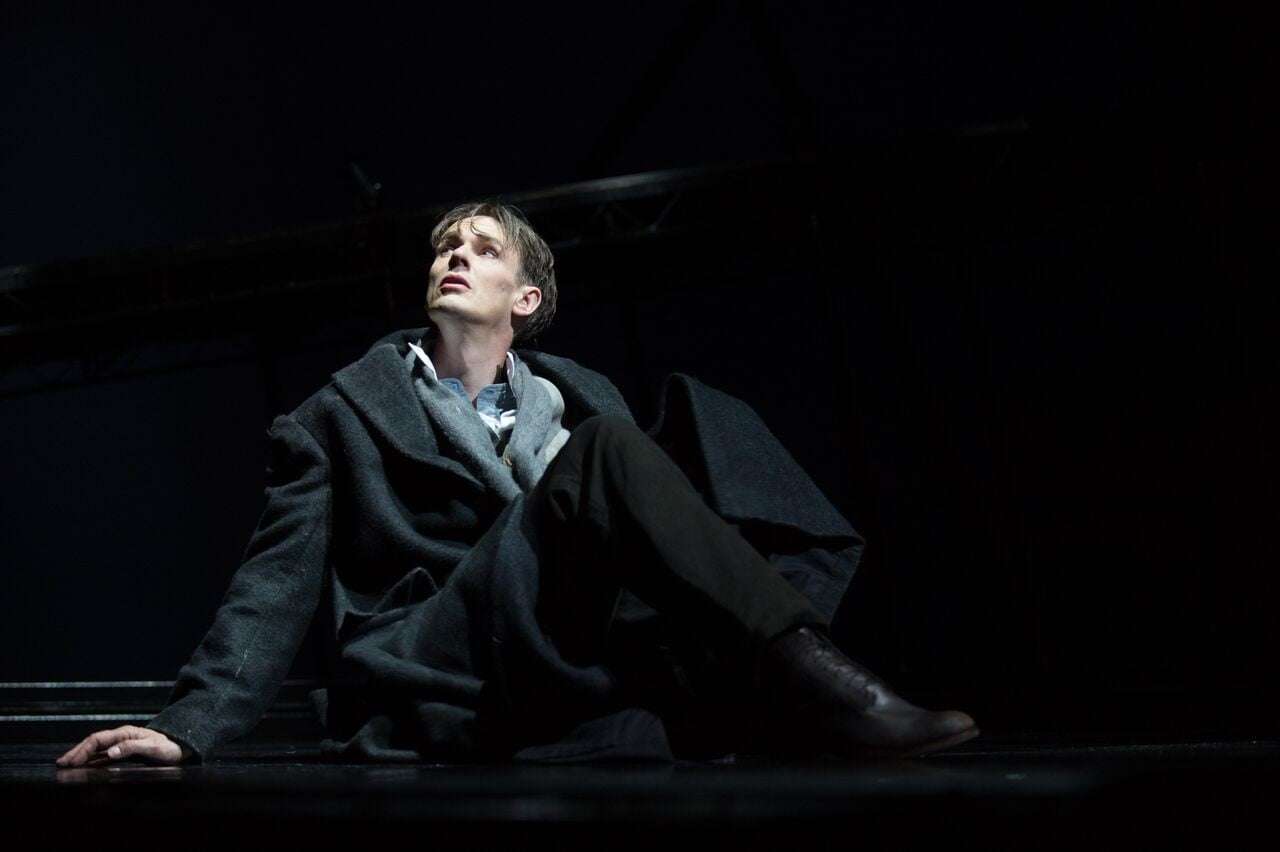 Bostridge was to be found in various placements – at a gradient’s highest point, at stage level, sitting, standing, lying down (while singing), running on, walking around. Whatever and wherever, things were chilly and secluded, the wanderer’s state of mind increasingly unbalanced, life past and present reflected upon to mounting depression. The background projections, although complementary, tended to sameness (perhaps emphasising the wanderer’s forlorn and troubled trek) and, at times, I found it more rewarding to shut my ears and let the music and the musicians do the illuminating. That (at least) fourteen people were credited for being the “creative team” seemed rather a lot for what we got. Berlin cabaret was suggested occasionally, Bostridge dressed to the nines.

Performance-wise, all was superb, Ian Bostridge was on peak vocal form, bringing a Lieder-singer’s artistry to the words and the music, and not resorting to ‘false’ acting; the song-cycle is central to his repertoire as a musician (he has recorded Winterreise twice) and as an author. Nature, the elements, and man’s relationship (conflicts) with them were vividly projected through his voice and the instruments; the extreme-stage-left twenty-strong Britten Sinfonia (quite a few woodwind-players doubling or tripling, Zender providing a symphony orchestra’s palette of colours) was excellent under the unobtrusive and masterly direction of Baldur Brönnimann. I was inclined to the notion that no amplification was used (hooray!), but a Sound Designer was credited, so I guess there was some sort of boost, albeit within the bounds of naturalness, and the sounds at least emanated from where the singer and the players were located. 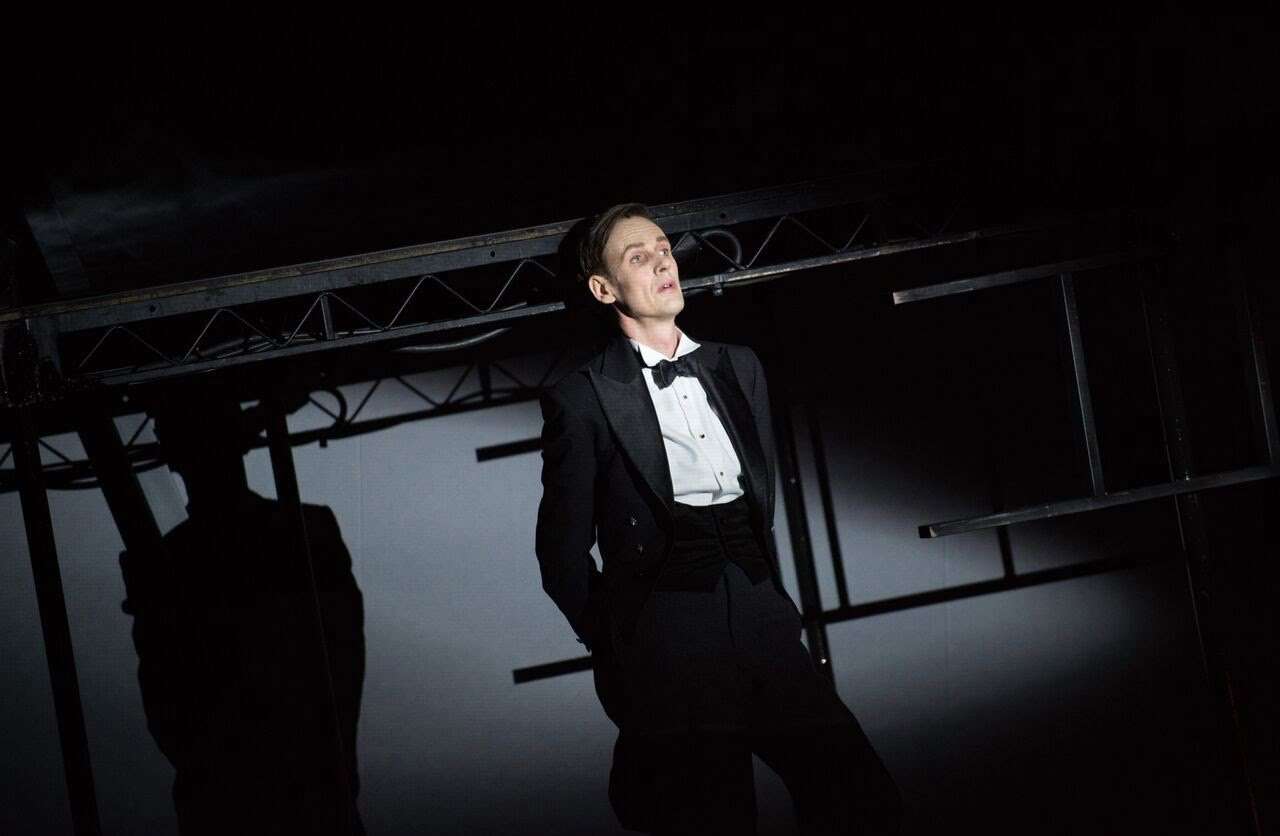 Additions to Winterreise, as we know it, include Zender interludes (stylistically diverse, from cutting edge to Viennese, the latter reminding of Schoenberg, Berg and Webern’s transcriptions of Johann Strauss waltzes) and the requirement for Bostridge to declaim in speech (recalling Pierrot Lunaire). This Winterreise is an intense experience, and I put my thumping headache down to this as well as some opaqueness in the images, to the excessively bright pinhead lights that came on around the periphery of the acting area when there was nothing to look at (we could have coped!), and the lamp Bostridge needed to read one of the numbers (the pages nearly scattered!), which was left-on shining into the auditorium: it was like being interrogated by the FBI.

Come the desolate close (the hurdy-gurdy now not turning, Zender’s use of saxophone striking), whoever let loose the first clap was too early; there should have been more sense of eternity as we sat there in hopeless stillness and darkness (and earlier a couple of ringing mobiles had intruded). Ultimately I was intrigued if unmoved, the ears receiving greater nourishment than the eyes, and there was much enlightenment to be had from Zender and these performers. In a very important sense, the music said it all. As an aside, I am now wondering about ENO’s “concert staging” of Elgar’s Dream of Gerontius next year … is nothing sacred.